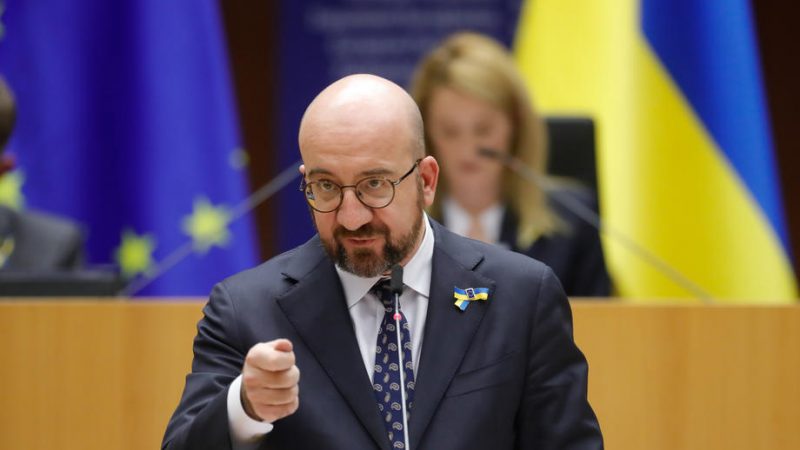 European Council President Charles Michel gives a statement during an extraordinary Plenary session debating on the 'Russian aggression against Ukraine' at the European Parliament in Brussels, Belgium, 01 March 2022. MEPs will debate 'Russia's invasion of Ukraine' and vote on a related resolution. [EPA-EFE/STEPHANIE LECOCQ]

The European Union said it would seriously look into Ukraine’s application to become a bloc candidate country, recognising the move’s political weight and dramatic circumstances as well as hesitation from many member states.

The pledge to consider the war-torn Eastern European country’s membership request came at an extraordinary session of the European Parliament on Tuesday (1 March), where Ukraine’s President Volodymyr Zelenskiy made an emotional plea for the EU to “prove that you are with us”.

Ukraine has been under attack from Vladimir Putin’s Russia since Thursday (24 February), in an invasion involving its air force and ground troops and heavy artillery, in the most serious war in Europe since the Balkan wars of the 1990s.

“We’re fighting for survival, and this is the highest of all motivation, but we are fighting also to be equal members of Europe. I believe that today we are showing everybody that’s exactly what we are,” Zelenskiy told the EU’s political elite via videolink from an undisclosed location in Ukraine.

A tired but determined-looking Zelenskiy, dressed in a black T-shirt, said Ukraine had “proven its strength… proven that we are exactly the same as you are”. 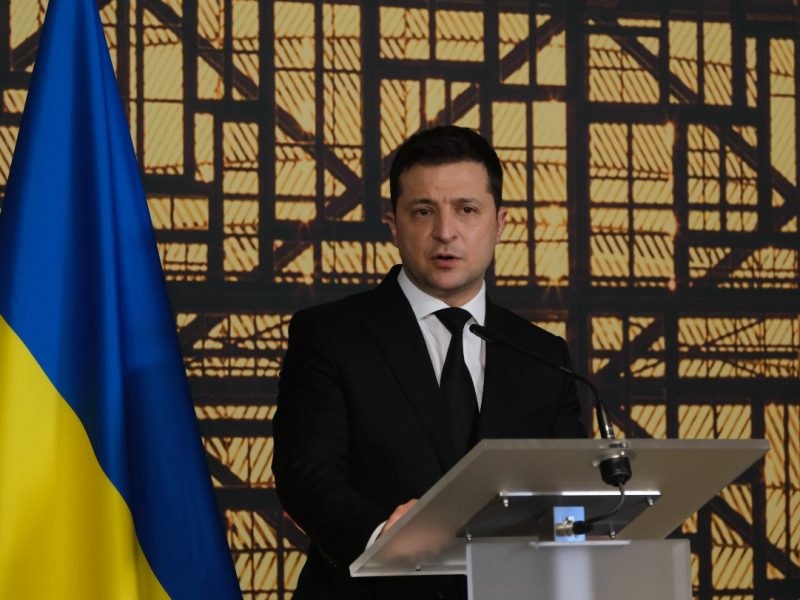 Ukrainian President Volodymyr Zelenskiy on Monday (28 February) submitted an official request to allow his country to gain ‘immediate’ membership under a special fast-track procedure as it defends itself from a Russian invasion.
“We ask the European Union for Ukraine’s immediate …

On Monday, Ukraine submitted an official request to join the EU. The European Commission will first have to produce an opinion on the request and present it to the European Council representing the 27 governments. They must then give their blessing, closing off a process that would normally take years.

Council President Charles Michel, who spoke after Zelenskiy, said the European Council “will not shirk from its responsibilities, we will analyse the request from Ukraine”.

“It will be up to us as a European Union to act in accordance with the times. It’s going to be difficult, we know there are different views in Europe,” Michel said and continued:

“The Council will have to seriously look at the symbolic, political and legitimate request that’s been made. And we’ll have to make the appropriate choices in a determined and clear-headed manner,” he added.

It will be up to Michel to bring the issue to the agenda of the EU leaders.

Calling this a “whatever it takes” moment, Metsola also said she would seek to ban any representatives of the Kremlin from entering the Parliament’s premises.

“Aggressors and warmongers have no place in the house of democracy.”

However, the usual geographical fault lines remain, and Central and Eastern European countries, traditionally more favourable to enlargement, face scepticism in the West.

Later on Tuesday, the Alliance of Liberal and Democrats for Europe (ALDE) political group announced that Sluha Narodu, the party founded by Ukrainian President Volodymyr Zelensky had become a member.

“Our party leaders, together with our Bureau, stand united in condemnation and rejection of President Putin’s unprovoked and unjustified military aggression on Ukraine, an attack on a sovereign, democratic and pro-European country, and against our liberal values that we hold so dearly,” they said in a statement, adding that following Zelensky’s call, they decided to act fast.

They also announced they were fundraising for the International Committee of the Red Cross who are helping Ukrainian citizens on the ground.

Not foreseen in the treaties

A spokesperson of the Austrian Foreign Ministry said Vienna would support “swiftly exploring ways of “significantly deepening” EU’s existing relationship with Kyiv, for instance “in the field of energy or regarding a common market.”

However, they said a “fast-track” or “immediate” accession process “is not foreseen in the EU treaties.”

“There are clear criteria, conditions and procedures for receiving candidate status, starting accession talks and EU membership. Austria does not think that all these principles should be thrown overboard.”

“We also have to think of all the membership aspirants that have been working very hard for many years; we should avoid creating two-class candidates,” they added.

These sentiments are echoed across Western capitals, who fear that the Western Balkan countries, which have been stuck in the process for years, would not take well to the idea.

Others are calling for alternative solutions.

One EU diplomat said Ukraine’s appeal “has been noted as a real sign of appreciation”, but the process would have to be the same as for any other member state.

“That said, given the circumstances, we would be open for a very specific and special partnership that could be realised in a shorter-term”, the diplomat added.

Others fear that the issue might break the unity the EU has shown in the face of the Kremlin’s invasion of Ukraine.

“How we respond today to what Russia is doing will determine the future of the international system. The destiny of Ukraine is at stake, but our own fate also lies in the balance,” European Commission President Ursula von der Leyen said on the plenary floor.

Calling to activate the temporary protection mechanism for the hundreds of thousands of Ukrainian fleeing to Europe, she said the EU must “provide them with a secure status and access to schools medical care and work. They deserve it, we need to do that now.”