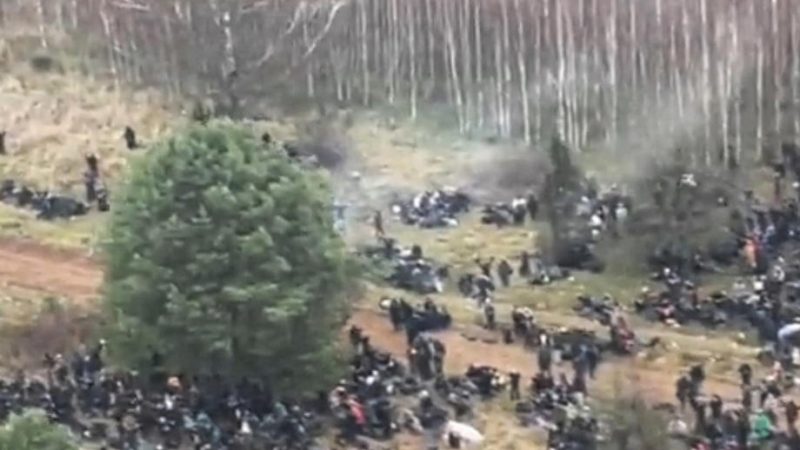 A frame grab taken from footage made available by Poland's Ministry of National Defence (MON) shows a group of migrants walking along a road leading to the Belarusian-Polish border, Belarus, 08 November 2021. [EPA-EFE/POLAND'S MINISTRY OF NATIONAL]

Poland had tightened security on its border with Belarus earlier on Monday (8 November) after migrants gathered in the region in hopes of crossing into Polish territory.

Asked by EURACTIV for an estimation, the Polish border guard on Tuesday morning (9 November) spoke about an estimated “several thousand” migrants present in the Polish-Belarusian border region.

Warsaw also warned that thousands more were on the way and future attempts to breach its frontier could be “armed in nature”. The Polish interior ministry said it had cracked down on several attempted border breaches, and said the situation was under control.

At the same time, the border traffic for goods and people at the impacted Kuznica crossing will be stopped as of Tuesday early morning, Poland’s border guard announced.

Two top EU officials – European Commission VP Margaritis Schinas and EU chief diplomat Josep Borrell — will travel to the main countries of origin for the migrants to “ensure that they act to prevent their own nationals from falling into the trap set by the Belarusian authorities,” Von der Leyen said.

Some 120 flights per week bring the human bomb Lukashenko is playing with https://t.co/l1FcjoW277

Sanctioning airlines on the table

Von der Leyen noted that the EU “will explore how to sanction, including through blacklisting, third-country airlines that are active in human trafficking.”

The EU would also explore together with UN bodies how to prevent a humanitarian crisis in the border zone.

Her words were echoed by European Home Affairs Commissioner Ylva Johansson who said the EU’s “urgent priority is to turn off the supply coming into Minsk airport”.

The idea had been first floated before the summer by Lithuania, whose foreign ministers Gabrielius Landsbergis confirmed to EURACTIV in July that official entities, such as airlines and tourist agencies, are involved in organized human trafficking via Belarus.

“Participating in human trafficking is illegal everywhere – and if we can trace who’s doing that, and especially if it’s an official body, then it can be put to sanctions,” Landsbergis then said.

In a phone call with Borrell on Monday, Landsbergis called to extend those also against airports in Belarus.

“All airlines of the world should understand that they cooperate with the criminal regime by flying to Belarus,” he said.

An earlier round of sanctions imposed in June hit the country’s key sectors of potash, oil and tobacco, while the EU sanctions also currently target 166 Belarusian regime officials, including Lukashenko and two of his sons.

“We will not hesitate to adopt sanctions if necessary against companies and countries that play into the hands of smugglers,” Borrell had warned already in mid-October.

“The migrants are provided with visas, plane tickets and an aircraft is ready to transport them to Minsk from where they are taken to the borders of Lithuania, Latvia and Poland,” he then said.

However, member states have so far been cautious in taking the next step.

A fifth sanction package is in the works, with more concrete proposals likely to be presented to the EU foreign affairs minister in their regular meeting next week.

Germany, meanwhile, who as Poland’s neighbour, has seen a steep rise in migrants entering from Belarus via its eastern border, has urged the EU to “take action” to help stem the flow of people from Belarus.

In October alone, the number stood at nearly 5,000, according to German authorities, to which the government in Berlin has responded by stepping up border controls and deploying extra police officers.

“We must help the Polish government secure their external border. This would actually be the task of the European Commission. I’m now appealing to them to take action,” he said.

Seehofer also repeated his previous comments that he supported Poland’s decision to build a border wall.

Twelve EU member states had asked Brussels in October to pay for barriers to prevent illegal migrants from entering the bloc. However, the current EU Schengen Border Code does currently not foresee a physical barrier as a measure for protecting the EU external borders. 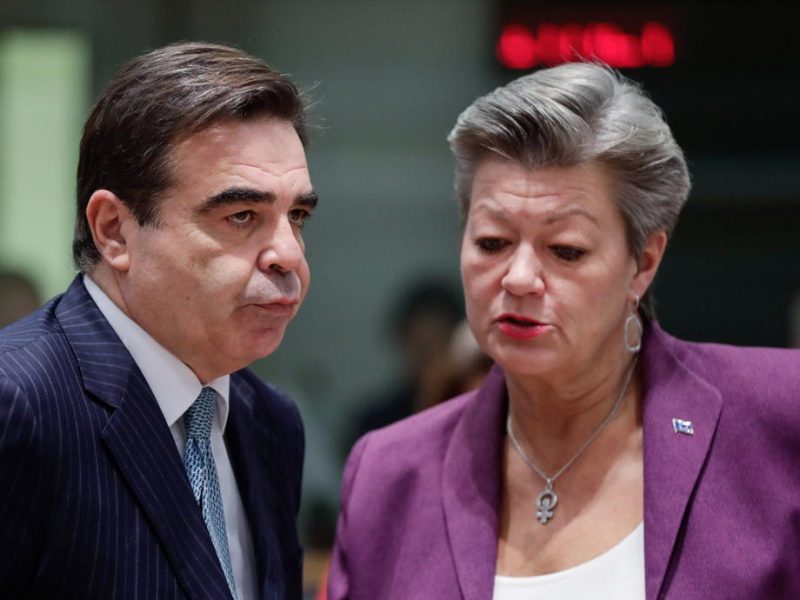