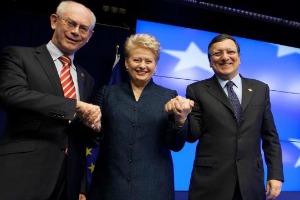 Having learned the bitter lesson of procrastinating with Ukraine, which has put its EU association agreement (AA) on ice, EU leaders decided today (20 December) to put Georgia and Moldova on a fast track to sign theirs by August 2014.

“The European Council reconfirms the European Union's readiness to sign these agreements as soon as possible and no later than the end of August 2014,” read the Conclusions of the two-day EU summit, which ended today (20 December).

Speaking to the press after the summit, European Council President Herman Van Rompuy said that EU leaders had seen the pro-European protests in Kyiv as “a yearning for a better future”.

“This aspiration to come closer to the European Union is shared also by the people of Georgia and of Moldova. And the European Council's message this morning is that we will stand by the side of these countries in their choice, and that we are willing to speed up the signing of the agreements with them, next August at the latest,” Van Rompuy said.

Analysts noted that August, when little happens in the EU institutions, is remembered chiefly for the August war of 2008 between Georgia and Russia, which started with a Georgian offensive against South Ossetia to try to reclaim the territory, which is de facto under Russian control.

EU leaders may also have wanted to ensure that the signatures take place before attention shifts to other issues, such as the top European jobs that will be up for grabs after the May European elections.

Both Georgia and Moldova initialled their AA at the 28-29 November Vilnius summit of the Eastern Partnership. The AAs are coupled with Deep and Comprehensive Free Trade Agreements (DCFTAs). The signing ceremonies in Vilnius went some way to compensate for Ukrainian President Viktor Yanukovich’s announcement at the same summit that his country would not sign the AA in the foreseeable future.

Ukraine’s AA has been initialled since March 2012, but its signature has long been lacking, with the Commission pressing for benchmarks and conditions such as freeing jailed former Prime Minister Yulia Tymoshenko. When Van Rompuy and Commission President José Manuel Barroso last attempted to press Yanukovich to sign the AA, her name was reportedly not mentioned.

As with the Ukraine, Moldova has been threatened by Russia with dire consequences if it follows the EU track. Last September, Russia banned wine exports from Moldova citing “food safety concerns”. But a much more serious blow to the Moldovan economy, experts say, would come from a Russian ban on products such as fruit or vegetables, as well as restrictions on Moldovan migrant workers.

Some Russian statements suggest that Moscow could impose restrictions on Moldovan nationals working in Russia. Seasonal workers abroad contributed €2 billion to the Moldovan economy this year. And 60% of that amount came from migrants working in Russia.

EU diplomats generally believe, however, that given Moldova's relatively small size it would not be difficult for the Union to help Chisinau if needed it. Last week the European Parliament voted to lift import duties on Moldovan wine from this week onwards, in an effort to make up for lost exports to Russia.

In relation to Georgia, the new development is likely to calm internal political in-fighting between the camps of former Prime Minister Bidzina Ivanishvili and former President Mikheil Saakashvili. The country now has a new president, Giorgi Margvelashvili and a new prime minister, Irakli Garibashvili. Georgia has had no diplomatic relations with Russia since the 2008 war.

Days ago, Georgian Prime Minister Garibashvili was asked if events in the Ukraine would impact on his country. He replied that Georgia was less dependent on Russia, adding that Ukraine and Moldova were more dependent on Moscow.

Speaking after the summit, German Chancellor Angela Merkel said that the signature of an AA with Moldova and Georgia required a rapid procedure, but that EU leaders were ready to adopt this procedure. Germany was seen for years as the country putting the heaviest brakes on Ukraine’s EU rapprochement.