EU: Russia must choose war or diplomacy in Ukraine 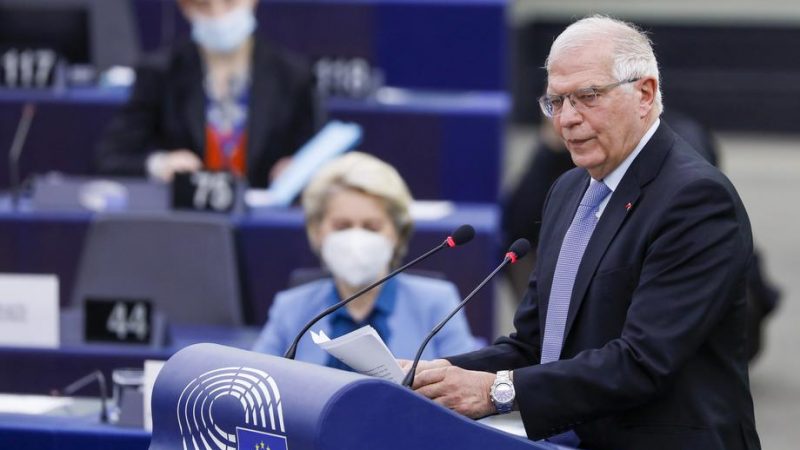 EU High Representative Josep Borrell held a speech on the situation in Ukraine in the European Parliament. [EPA-EFE/JULIEN]

While continuing negotiations and exploring all diplomatic routes, should Russia choose the path of war, the EU is prepared, said the heads of the EU institutions during Wednesday’s (16 February) plenary debate in European Parliament.

“Diplomacy has not yet spoken its last words,” said European Commission President Ursula von der Leyen, calling on Russia to “not choose war.”

In her view, “a path of cooperation between us and Russia is still possible.”

However, the decision to continue talks falls on Moscow, EU diplomats said.

“The choice today is a choice between war and tragic sacrifices that would go along with that war or the courage of a political engagement, the courage of a diplomatic negotiation,” European Council President Charles Michel told MEPs.

Michel urged Russia to take concrete and tangible actions towards de-escalation, which are the “condition for sincere political dialogue.”

In his view, the last two days have shown that Russia could be open to diplomacy.

While there are “signs of hope,” however, von der Leyen said Russia is still sending conflicting messages.

Earlier this week, Moscow announced it would start pulling troops back from Ukraine’s borders. Yet, according to NATO Secretary-General Jens Stoltenberg and US officials, signs of “de-escalation on the ground” from Russian forces are yet to be seen.

Meanwhile, on Tuesday (15 February), the Russian parliament called on Putin to formally recognise the separatist regions of Donetsk and Luhansk as independent republics, a move immediately criticised by EU High Representative Josep Borrell.

Speaking to MEPs, Borrell said Russia is undermining “the territorial integrity of a state,” which threatens Europe’s security.

“It is a crisis that has come about and affects the whole security structure in Europe,” he said.

MEPs from various parties also expressed concerns about the bloc’s security and defence.

“The development [in Ukraine] is a wake-up call in security and foreign policy,” said MEP Manfred Weber (EPP).

Social-democrat MEP Iratxe García Pérez also asked the EU to look at its ability to respond to external threats.

“We can’t sit on the sidelines as a neutral spectator when it comes to those matters that affect our security,” she said.

While the priority remains peace, the EU is ready to respond with sanctions if Russia opts for an escalation.

“Should the Kremlin choose violence against Ukraine, our response will be strong and united,” said von der Leyen, adding that the Commission and the EU’s diplomatic service (EEAS) have been working to prepare a “robust and comprehensive package of potential sanctions.”

These measures would not only include freezing assets and travel bans for Russian citizens but also limiting Moscow’s access to high-tech components from the EU “for which Russia is almost entirely dependent on us.”

This would negatively impact Russia’s economic development, according to von der Leyen.

“Our sanctions can bite very hard, and the Kremlin knows this well,” she added.

The Commission president also said the EU is ready to face an eventual shortage of gas supply if Russia “decides to weaponise the energy issue.”

In recent years, she said infrastructure development has made Europe better equipped in terms of gas distribution. In contrast, recent talks with the US, Qatar, Egypt and other countries could lead to increased gas and liquefied natural gas deliveries to the EU.

These measures put Europe “rather on the safe side for this winter,” she said.