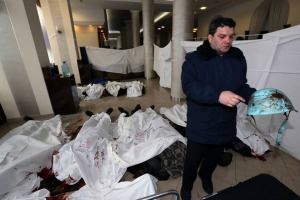 The European Union agreed yesterday (20 February) to impose sanctions on those responsible for deadly violence in Ukraine and warned it would ratchet up the pressure if the situation there got worse. At least 39 people were killed yesterday in central Kyiv, many by snipers or machine-gun fire. Three EU ministers are in Kyiv to help negotiate a peace plan.

As Ukraine suffered its bloodiest day since Soviet times, EU foreign ministers meeting in emergency session in Brussels decided on measures against Kyiv including visa bans, asset freezes and a suspension of the export of riot control equipment like water cannon, body armour and helmets.

Although the EU quoted no names, officials said those targeted for sanctions may include ministers but not President Viktor Yanukovich himself, at least for now. Protest leaders found responsible for violence could also go on the sanctions list.

At the same time, the 28-nation bloc pushed on with its attempt to broker a peaceful solution to a conflict that has left tens of people dead, including at least 39 on Thursday.

The foreign ministers of Germany, France and Poland did not join their colleagues in Brussels, as planned, bit decided to stay in Kyiv and try to broker a deal between the government and opposition.

"I think (ministers) were truly alarmed, shocked by the scale of violence that has taken place, and that will drive the agenda as it drove the agenda today," EU foreign policy chief Catherine Ashton said.

"The work of the three ministers is crucial on the ground and we will be in constant touch with them to seek their advice and to see what efforts they are able to make, what progress they're able to make," she told a news conference.

The EU decided "as a matter of urgency to introduce targeted sanctions" against people responsible for human rights violations, violence and use of excessive force in Ukraine, the foreign ministers said in a statement.

"The scale of implementation will be taken forward in the light of developments in Ukraine," they said.

The EU will start work immediately on drawing up an initial list of people affected by sanctions, but it could be several days before it is published, officials said.

Ministers called for an immediate end to the violence, full respect for human rights and urgent independent investigations into human rights violations.

EU governments also agreed to "reassess export licences" for a wide range of military equipment but did not endorse a blanket arms embargo, mentioned in an earlier draft seen by Reuters.

The EU could add more names to its sanctions list if the bloodshed persists, in a policy intended to give it leverage to push for a political solution, diplomats said.

Decisions on who to put on the list would be made very quickly, British Foreign Secretary William Hague said. "We've all stressed the need for swift and effective action.

"There is widespread horror in the EU … at the scale of the loss of innocent life," he said as he left the meeting.

Hague said there could be "quite a bit of overlap" between the EU and U.S. sanctions lists.

The United States on Wednesday (19 February) imposed visa bans on 20 senior Ukrainian government officials believed to be responsible for the violence against protesters, but it did not give their names.

But Yanukovich stunned the EU in late November by spurning the EU pact and instead winning a $15 billion (€11 billion) bailout deal from Russia. His move sparked weeks of street unrest in Ukraine that escalated this week, causing alarm in world capitals.

Until now, the EU has sought to promote dialogue between the government and opposition and a peaceful settlement to the crisis.

The bloody assault on protesters in Kyiv's Independence Square spurred a dramatic change of heart by EU governments. Until then, they had been largely sceptical about the effectiveness of sanctions on Ukraine, saying they had achieved little in Belarus, Ukraine's northern neighbour.

Parliament votes ban of use of firearms

In the late hours of Thursday, Verhovna Rada, the Ukraine parliament, passed a bill banning the use of firearms in Kyiv and requiring internal and army forces to withdraw to their barracks. 236 out of 239 MPs present passed the bill, 34 of which from Yanukovich’s Party of the regions. The total number of MPs in Verhovna Rada is 442.

As the Washington Post correspondent Max Fisher wrote in his blog, the vote, if ignored by Yanukovich, places him outside both the democratic processes and the rule of law.

The vote also reduces the odds for an outside Russian intervention, given how difficult it would be to maintain the fiction of intervening to protect Ukrainian democracy from "insurgents," Fisher writes.

The news website Leviy bereg wrote this morning (21 February) that the opposition and the EU foreign ministers Frank-Walter Steinmeier (Germany),  Laurent Fabius (France) and Rados?aw Sikorski (Poland) have proposed to Yanukovich to sign a “peace plan” including:

A document containing these provisions has been given to the President. It has just been announced that the signature of a document will take place at 12.00 noon Kyiv time (10 a.m. CET).

In the meantime, press reports from the Ukrainian region of Crimea say that the local authorities have called on Russia to come and “bring order” to Ukraine.

"He called upon President Yanukovich to immediately pull back all security forces - police, snipers, military and paramilitary units, and irregular forces," the White House said in a statement.

"The Vice President made clear that the United States is prepared to sanction those officials responsible for the violence," the White House said.