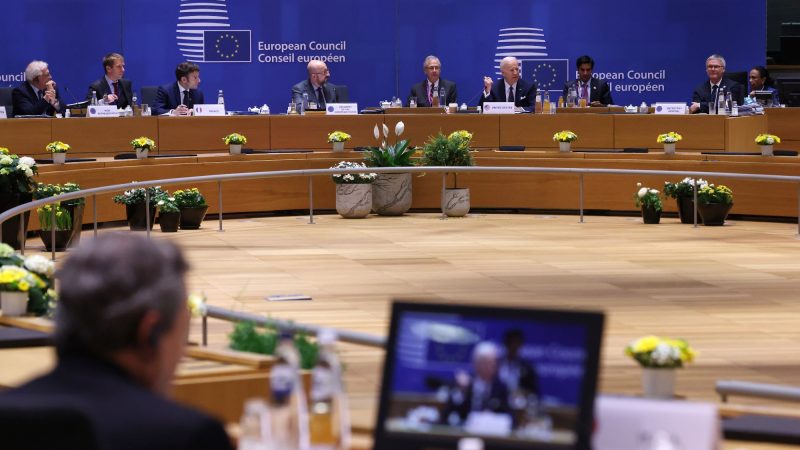 EU leaders gathered in Brussels on Thursday (24 March) making no major decisions, the summit being marked by the presence of US President Joe Biden and by a sharp video message by Ukrainian President Volodymyr Zelenskyy.

EU leaders repeated their pledges of support and future path to Ukraine, but stopped short of agreeing on new painful sanctions on Russia or a fast-track to candidate status.

In their joint statement at the end of a long summit day, EU leaders stated the “European Union stands by Ukraine and its people and the European Council reaffirms the Versailles Declaration, acknowledging the European aspirations and the European choice of Ukraine, as stated in the Association Agreement”.

On 11 March in Versailles, EU leaders tasked the Commission to prepare an opinion on Ukraine’s EU membership bid, having “acknowledged the European aspirations and the European choice of Ukraine”. 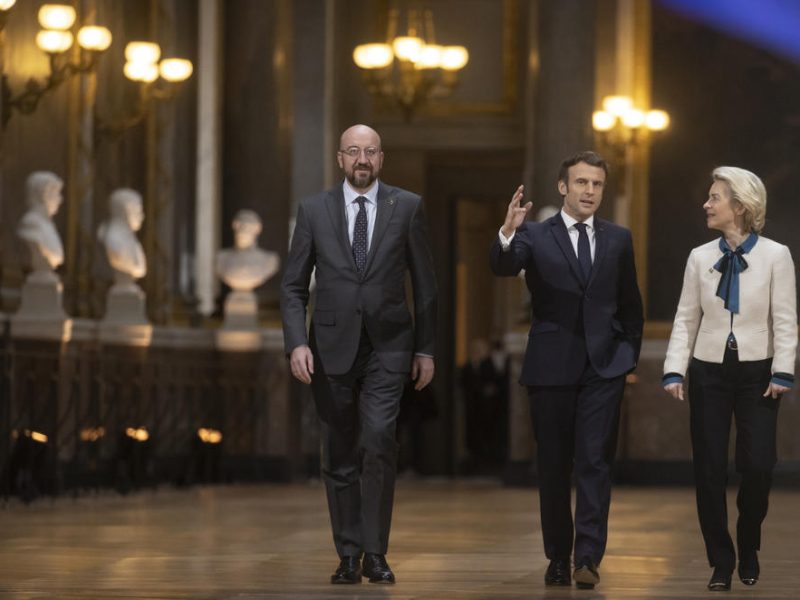 With war at its doorstep, EU agrees to move on defence

The new wording simply says that leaders reiterated their “invitation to the Commission to submit its opinion in accordance with the relevant provisions of the Treaties.”

To issue an opinion, the so-called “avis,” as to the country’s readiness to open negotiations, however, is a lengthy process that can take weeks to months before an even longer uncertain process to join the bloc.

EU leaders also pledged more practical support to Ukraine and again condemned Russia and demanded an end to the war.

“The European Union will continue to provide coordinated political, financial, material and humanitarian support,” they also said, committing to create a “Ukraine Solidarity Trust Fund” and to work with international partners to raise money “for the reconstruction of a democratic Ukraine” after the war is over.

It is unlikely, however, that Ukraine would be satisfied with the outcome of the summit.

In an emotional plea to EU leaders, Ukraine’s President Volodymyr Zelenskyy, who earlier in the day had also addressed NATO leaders, thanked for EU’s united support of Ukraine, but he also said the EU was late to impose the next round of sanctions.

But the main part was a pitch that his country had proven worthy of EU membership, portraying Ukraine’s fight against Russia as a clash of values by stressing Kyiv was providing decent treatment to Russian prisoners of war and being transparent.

“These are different worlds, we and they,” Zelenskyy said, speaking about Russia.

“These are different values. This is a different attitude to life. The Russian military does not see what dignity is. They do not know what conscience is. They do not understand why we value our freedom so much. This determines how the country will live. And who to be in Europe,” he added.

“And now you and I are preparing Ukraine’s membership in the European Union, finally,” Zelenskyy said.

“Here I ask you: Do not be late. Please. Because during this month you have compared these worlds, and you see everything. Who is worth what. And that Ukraine should be in the EU in the near future,” he added.

“France, Emmanuel [Macron], I really believe that you will be for us. Slovenia is for us. Slovakia, for us. The Czech Republic is for us. Romania knows what dignity is, so it will be for us at the crucial moment. Bulgaria is for us. Greece, I believe that with us. Germany (…) I’m a little later. Portugal — well, practically (…) Croatia, for us. Sweden, blue and yellow should always be together. Finland, I know you are with us. The Netherlands is rational, so let’s find a common language,” Zelenskyy continued.

“Listen, Viktor, do you know what is happening in Mariupol?” Zelenskyy said, adding “I want to be open once and for all you should decide for yourself, who you are for”.

The Ukrainian president recounted his visits as a young man to Budapest, to a Holocaust memorial at the banks of the Danube river.

“I saw this memorial … on the shores on the Danube. About mass murders. I was there with my family. Listen, Viktor, do you know what’s going on in Mariupol? Please, if you can, go to your waterfront,” Zelenskyy said.

“Listen, Viktor, do you know what’s going on in Mariupol?” Zelensky at EU summit directly calls out Orbán on Hungary’s stance on Russia sanctions and weapons (from 10:00) https://t.co/6tCsyEG211 pic.twitter.com/gFac1cOcwY

Hungary and Bulgaria are the only two EU members who haven’t sent weapons to Ukraine.

While Bulgaria is reluctant to send military aid due to historical reasons, Orbán is widely considered to be Russian President Vladimir Putin’s closest ally among EU leaders.

According to an EU official in the room, Michel reacted on behalf of member states.

The limited practical outcomes of the back-to-back meetings with the EU, NATO and G7 also underlined the limited options even closely-aligned capitals have in confronting Moscow.

Russia accounts for about 45% of EU gas imports, 25% of oil imports and 45% of coal, but some countries are far more dependent.

Germany, which gets 55% of its gas imports from Russia, has warned an immediate ban would cause a recession and even further, spiking energy prices.

Belgian Prime Minister Alexander De Croo argued against a “total embargo” on oil and gas. “We are not at war with ourselves”, he said.

EU leaders discussed that Europe might have to adopt further sanctions against Russia, but as Dutch Prime Minister Mark Rutte told reporters after midnight, leaders didn’t touch upon details “which sanctions that could be”.

Asked about a possible ban on Russian energy imports as part of a new sanctions package, Rutte said “everybody wants it, but it’s nothing that you can do in the short term,” as this would require time to find alternative sources of energy.

Poland and the Baltic States were leading the charge for tougher measures against Russia, including a ban on Russian ships and road vehicles entering the EU.

The phrase “Evil Empire” was coined by then US President Ronald Regan in a 1983 speech which marked a high point in the Cold War.

On Thursday, EU leaders also were joined for part of their meeting by US President Joe Biden.

In a meeting with European Council President Charles Michel Biden stressed that “the single most important thing we have to do in the West is to be united”.

European Commission President Ursula von der Leyen, said the US was going to supply Europe with additional LNG to replace Russian gas, a move that she described as “an important step forward”.

Both are expected to make the announcement on Friday morning.