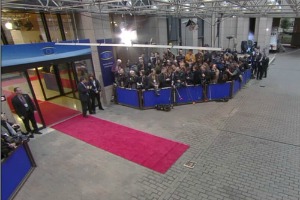 EU leaders will receive today (6 March) Ukraine’s interim Prime Minister Arseny Yatsenyuk at their extraordinary summit in Brussels, in which leaders are set to discuss a response to the escalation of the crisis in Ukraine.

Yatsenyuk, who is leading a caretaker government since 26 February after former President Viktor Yanukovich left the country, is expected to be given a treatment usually reserved for a head of state.

Yesterday the EU offered Yanukovich’s government €11 billion in financial aid for the next couple of years, provided Kyiv reaches a deal with the International Monetary Fund. The sum matches exactly Russian President Vladimir Putin’s previous offer, which had rewarded Yanukovich for not signing the Association Agreement (AA) with the EU.

The move can be seen as highly unusual by EU standards, especially after the numerous statements from EU officials that the Union was not going to enter a bidding exercise about Ukraine.

Russia doesn’t see the current Ukraine government as legitimate but EU diplomats who spoke to Brussels journalists yesterday insisted that Yatsenyuk’s government was legitimate, as it has been approved by two thirds of the Ukraine Parliament’s members.

Yatnesyuk will also be offered an acceleration of negotiations on visa liberalisation and and a free trade pact, both of which will be put on a fast track, EU diplomats said.

EU leaders are also widely expected to qualify Russia’s military incursion into Crimea as "an act of aggression" that was "in clear violation of Ukraine's sovereignty and territorial integrity" and which violates the UN Charter.

Although all options are on the table, it is less certain that EU leaders will agree any biting sanctions against Russia, with whom many countries have vested business interests. As surreal as it may appear, France is currently selling two warships to Russia, as part of a €1.2 billion deal that could mark the biggest-ever sale of NATO weaponry to Moscow.

France said EU leaders meeting in Brussels on Thursday could decide on sanctions against Russia if there is no "de-escalation" by then. Other EU countries, including Germany, are more reticent about sanctions.

One major decision expected from the summit is a date for when the AA could be signed with Ukraine. A high-level Ukrainian diplomat recently said that Kyiv wanted to sign the landmark agreement on the occasion of the regular EU summit on 20-21 March. But EU officials conveyed the message that the Union did not want to rush with the signature.

The EU summit takes place against the background of failure of diplomatic efforts to resolve the crisis in Ukraine in Paris yesterday, with Moscow and Washington at odds and Russia's foreign minister refusing to recognise his Ukrainian counterpart.

US Secretary of State John Kerry said discussions would continue in the coming days in an attempt to stabilise the crisis and he expected to meet Russian Foreign Minister Sergei Lavrov again in Rome today.

The US State Department in fact dropped its diplomatic niceties on Wednesday and all but accused Russian President Vladimir Putin of lying about events in Ukraine, publishing a list of what it said were 10 of his "false claims."

A "fact sheet" released by the State Department's press office said Putin had ignored or distorted the facts in "justifying Russian aggression in the Ukraine."

And NATO, at a meeting in Brussels, announced it was cutting back on cooperation with Russia to try to pressure it into backing down on Ukraine and suspended planning for a joint mission linked to Syrian chemical weapons. The alliance said it would step up engagement with Ukraine's new leadership.

The West is pushing for Russia to return troops to barracks, accept international monitors in Crimea and Ukraine and negotiate a solution to the crisis through a "contact group" probably under the auspices of a pan-European security body.

The Pentagon will more than double the number of US fighter jets on a NATO air patrol mission in the Baltics and do more training with Poland's air force as it strives to reassure allies alarmed by the crisis in Ukraine, officials in Washington said on Wednesday.

Russia and the West are locked in the most serious battle since the end of the Cold War for influence in Ukraine, a former Soviet republic with historic ties to Moscow that is a major commodities exporter and strategic link between East and West.

Ukraine pulled out of a trade deal with the EU under Russian pressure last year, sparking months of protests in Kiev and the 22 February flight from Kyiv of President Viktor Yanukovich, a Russian ally.

Ukraine says Russia has occupied Crimea, where the Russian Black Sea fleet is based, provoking an international outcry.