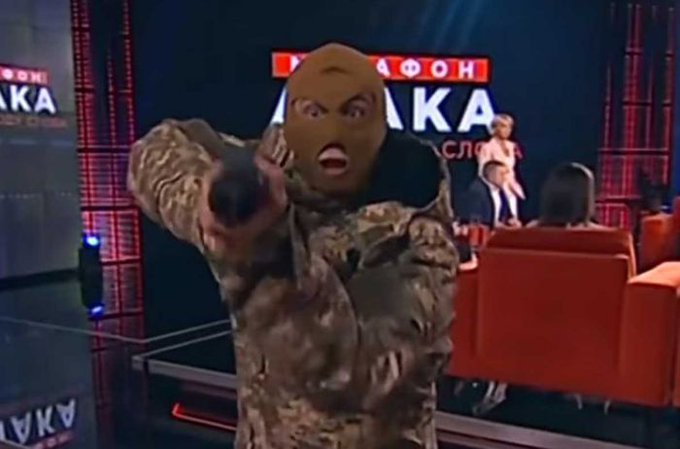 Many viewers in Ukraine were taken in by what looked like an anti-terrorist forces swoop on a TV studio during a live show on Thursday (7 November). It now appears that journalists had staged the fake attack to flag the authorities’ pressure on their work.

On Thursday evening, during the “Attack on Freedom of Speech” show, armed and masked people in camouflage fatigues and balaclavas burst into the studio. As it turned out, the “crackdown” on the channel was staged. However, people present in the studio were terrorised and tried to take cover, because they obviously were not aware of the set-up.

The real reasons for the staged attack became known later. The same day, the office of the TV channel’s owner, Volodymyr Makeyenko, had been searched by the authorities. The press service of the State Bureau of Investigation reported that the investigative steps were being taken as part of an investigation into the purchase of the channel.

Makeyenko himself was indignant at the search carried out in his house and called the actions of the State Bureau of Investigation cynical.

He also commented on allegations that he had allegedly been a figurehead of former President Petro Poroshenko at the time of the purchase of the channel. Makeyenko assured that this was not the case and that the process of buying the channel was transparent, with lawyers and auditors present at all stages.

Poroshenko was indignant at the searches of the channel’s owner.

“Searches and seizure of accounts are attempts to stop broadcasting, which can happen to any channel” he wrote he is on his Facebook page.

The former speaker of the Verkhovna Rada, Andrei Parubiy, also reacted and accused the new President Volodymyr Zelenskiy of harassing the media.

“Zelensky’s regime is starting to harass independent media outlets that expose the failed activities of his government, which sometimes are borderline with surrendering national interests. The attack on the Pryamoy channel is an attempt to shut the mouths of all of us – those who do not want to allow the collapse of the state, and the return of Ukraine to the Russian world”, he wrote.

The day after the staged attack, the channel turned to the public with an official apology. They explained their act with “fears about freedom of speech and pressure on the channel from the current government.”

Harlem Désir, the OSCE Representative on Freedom of the Media, voiced his worries following the news of the search in the office of Makeyenko.

Concerned about yesterday’s search in the home of Volodymyr Makeyenko, the owner of TV Priamij @prm_ua, in Kyiv, #Ukraine. I call on the investigators to respect freedom of the media.

“I call on the investigators to respect freedom of the media”, he tweeted.