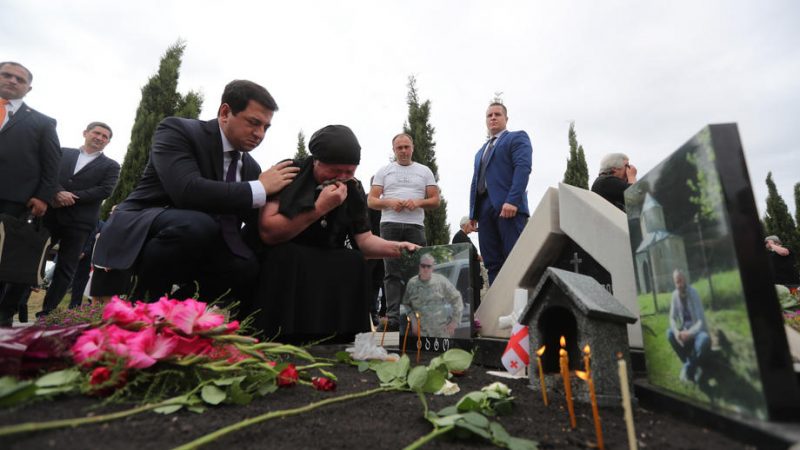 File photo. People attend a wreath laying ceremony at a cemetery in Tbilisi, Georgia, 8 August 2019. An official ceremony was held here on the occasion of the eleventh anniversary of the Russian-South Ossetian-Georgian conflict, or Russo-Georgian War of August 2008. [EPA-EFE/ZURAB KURTSIKIDZE]

As tens of thousands of Russian troops mass near Ukraine’s border, many in fellow ex-Soviet state Georgia are feeling a frightening sense of déjà vu.

In 2008, during the Summer Games in Beijing, Russia launched a devastating ground assault against the small Caucasus country on its southern border.

Georgia was battling pro-Russian militia in its separatist region of South Ossetia, after they shelled Georgian villages.

The fighting in August 2008 only lasted several days, but claimed more than 700 lives and displaced tens of thousands of ethnic Georgians.

“It’s horrible what we see these days in Ukraine,” said Zina Tvaladze, a mother of two displaced from separatist-controlled South Ossetia.

“It looks like Russian President Vladimir Putin is ready to shed the blood of Ukrainians and of his own soldiers just because he wants to restore the Soviet Union,” she said.

In 2008, the 53-year-old told AFP, the separatists “burned our house as Russian troops nearby watched. We were lucky to escape execution.”

At the centre of both crises is a years-old Western promise that the two ex-Soviet countries would be able to join the US-led NATO military alliance.

Just three months before the Georgian war, NATO heads of state had agreed that both Ukraine and Georgia would “become members of NATO”.

The move angered Putin, who views any expansion towards Russia’s borders as a security threat, despite the West stressing that NATO is purely a defence organisation.

The 2008 fighting in Georgia ended after just five days with a European Union-mediated ceasefire, under French presidency of the Council of the EU.

European Union leaders will meet in Brussels on 1 September for an extraordinary summit to review their relationship with Moscow after the crisis in Georgia revived East-West tensions reminiscent of the Cold War era.

The Kremlin recognised independence for the two breakaway statelets of South Ossetia and Abkhazia, and established permanent Russian military bases there.

They began backing Kremlin-friendly separatists in Ukraine’s east in an ongoing conflict that the United Nations says has since killed 13,000 people.

More than 13 years after the war in South Ossetia, China is holding the Winter Olympics.

As European leaders scramble to avert any Russian invasion, Georgian politicians have been voicing solidarity with Ukraine.

President Salome Zurabishvili last week criticised Russia’s policy of “provocation,” saying it posed a threat to both Georgia and Europe at large.

Georgia understands “very well what the people of Ukraine feel today”, she said.

“This is solidarity from a country that has already suffered and is still suffering from occupation” by the Russians.

But for some in the small Black Sea country, words are not enough.

Mamuka Mamulashvili fought against Russian forces in South Ossetia in 2008.

Today, he is the commander of the “Georgian Legion”, a unit of some 100 former Georgian soldiers fighting in the Ukrainian army.

“Many Georgians have enrolled in the Ukrainian military,” he told AFP.

“We are fighting for Ukraine, but also for Georgia’s freedom,” he said, adding that a dozen Georgian volunteers have died fighting separatists in Ukraine since 2014.

“There is a consensus in Georgia that the fall of Ukraine would spell the end of Georgia’s statehood,” he said.

Putin has dismissed claims that Russia plans to attack Ukraine, but demanded “security guarantees” that include the reversal of NATO’s promise to admit Ukraine and Georgia to the 27-nation military bloc.

Fourteen years on from that assurance, however, the two pro-Western nations are still not on a formal membership path.

“The United States has so far rejected Putin’s demands to close NATO’s doors to Ukraine and Georgia,” but any membership still “remains a distant — if not unlikely — prospect,” Vasadze said.

For many Georgians, the stakes are high.

Nona Mamulashvili, a leader of Georgia’s main opposition party, said Putin’s goal now was to force the West to break ties with both Ukraine and Georgia.

“Georgia’s fate is being decided today in Ukraine,” said the member of the United National Movement.

Tvaladze, the woman displaced from South Ossetia, feared a Russian victory in Ukraine could embolden Putin to finish what he started in Georgia.

“If Ukraine is defeated, Georgia will be his next trophy,” she said.