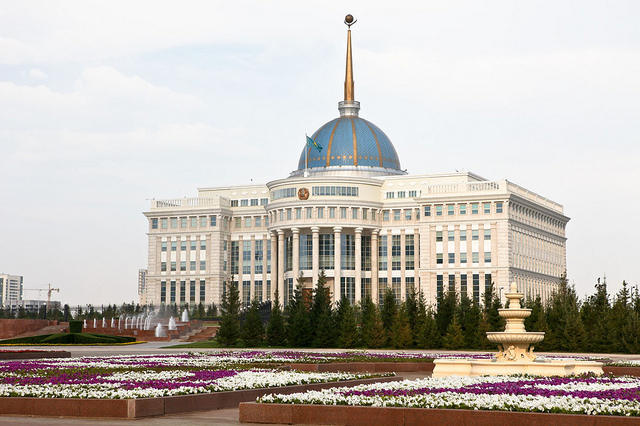 France and Germany suggested Monday (5 January) that Western sanctioning Russia had reached its limits and could only make things worse. The statements were made ahead of a four-way summit on the Ukraine crisis in Kazakhstan’s capital Astana on 15 January.

Ukrainian President Petro Poroshenko said on 22 December he had invited the leaders of Russia, France and Germany to talks in an attempt to restore peace to Kyiv’s eastern territories.

But, asked about the planned summit, German Chancellor Angela Merkel’s spokesman, Steffen Seibert, said, “I can’t say yet if and when such a meeting will take place. Such a meeting only makes sense if we can make real progress.”

“We have a very clear idea of what constitutes real progress. This would be first and foremost achieving the full implementation of the Minsk peace accord and a genuine and lasting ceasefire, a contact line between areas controlled by Ukraine and rebels, and a withdrawal of heavy weaponry. Such things must be prepared in advance,” he said.

In an interview with France Inter radio, French President François Hollande struck a more optimistic note: “I will go to Astana on 15 January on one condition, which is that there should be a possibility of making new progress. If it’s just to meet and talk without making any actual advances then there’s no point. But I think there will be progress.”

Hollande also said the West should stop threatening Russia with new sanctions and instead offer to ease off on existing restrictions in exchange for progress in the peace process in Ukraine.

“I’m not for the policy of attaining goals by making things worse,” Hollande said, adding “I think that sanctions must stop now.”

Russia’s position is misunderstood, he suggested. “Mr. Putin does not want to annex eastern Ukraine, I am sure – he told me so,” Hollande said. “What he wants is to remain influential. What Mr. Putin wants is that Ukraine not become a member of NATO. The idea of Mr. Putin is to not have an army at Russia’s borders.”

Germany’s deputy chancellor, Sigmar Gabriel too warned against destabilising Russia through too severe sanctions over the Ukraine crisis. He said an unstable Russia would pose a danger to all of Europe.

Gabriel told Bild am Sonntag that it was not in Germany’s or Europe’s interest to bring about a Russian collapse.

“The goal was never to push Russia politically and economically into chaos,” Gabriel said in an interview.

“Whoever wants that will provoke a much more dangerous situation for all of us in Europe,” he said, adding that the aim of the sanctions so far was to bring Russia back into negotiations.

“We want to help solve the conflict in Ukraine, not to force Russia to its knees ,” he said.

Top-ranking diplomats from Ukraine, Russia, Germany and France have meet in Berlin yesterday, and their foreign ministers held a telephone conference on Friday.

Merkel is due to meet Ukrainian Prime Minister Arseny Yatseniuk in Berlin on 8 February, and the German and Ukrainian finance ministers are also due to hold talks that day.