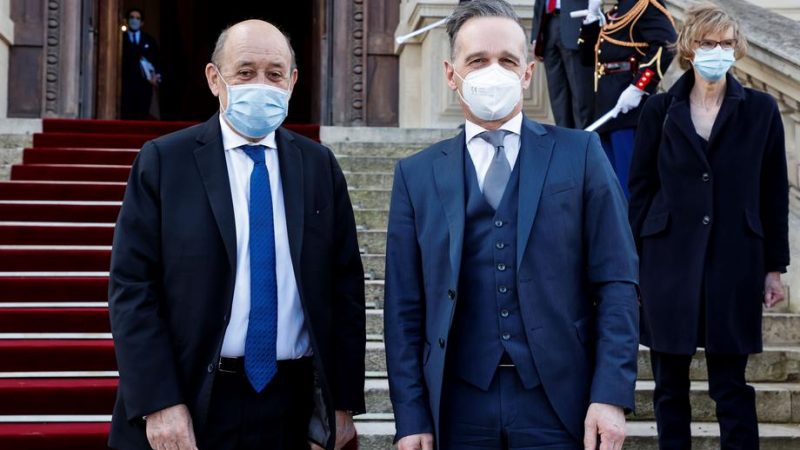 File photo.French European and Foreign Affairs Minister Jean-Yves Le Drian (L) poses with German Minister of Foreign Affairs Heiko Maas (R) as he welcomes him prior to a meeting on the Middle East Peace process, at the Quai d'Orsay, in Paris, France, 11 March 2021. [Pool/EPA/EFE]

France and Germany accused Russia on Thursday (18 November) of breaking diplomatic protocol after Moscow published their confidential correspondence over Ukraine, the latest sign of deteriorating ties between Moscow and the West.

On Wednesday, the Russian foreign ministry released a number of diplomatic letters it exchanged with Germany and France to try to show that its stance on talks over eastern Ukraine has been misrepresented. 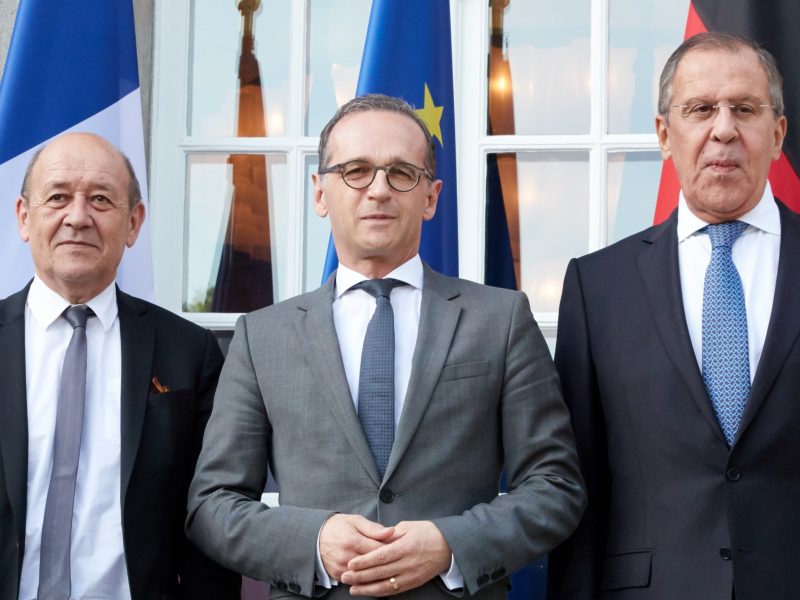 The Russian foreign ministry published on Wednesday (17 November) a number of diplomatic letters it exchanged with Germany and France to try to show that its diplomatic stance on talks over east Ukraine has been misrepresented.

“We consider this approach to be contrary to diplomatic rules and customs,” French Foreign Ministry spokeswoman Anne-Claire Legendre told reporters in a daily online briefing.

France and Germany said Russian Foreign Minister Sergei Lavrov had refused to hold a so-called Normandy format meeting with his French, German and Ukrainian counterparts, but Russia said Lavrov was merely unavailable for a specific meeting.

Outgoing Chancellor Angela Merkel downplayed the significance of Russia’s move, but told a news conference that this did not change the fact that no meeting had taken place, something she regretted.

“The publication of letters isn’t so surprising. I often read my own letters in the papers. We certainly have nothing to hide,” she told a news conference held on another matter.

But she added that she asked Russian President Vladimir Putin to arrange another round of talks before she leaves office. That he had not done so was a shame, she said, “since meetings have their own dynamic,” and allowed progress to be made even in seemingly intractable situations.

Paris earlier accused Russia of refusing to accept a ministerial meeting with France, Ukraine and Germany to discuss the pro-Russian separatist insurgency in eastern Ukraine and denied that it had failed to respond to proposals made by Moscow.

In a rare response, Russia published 28 pages of diplomatic documents, showing it had said in advance that Lavrov could not take part in the proposed 11 November meeting.

However, the documents published also showed serious differences between Russia, France and Germany.

Russia attached a draft statement on the “internal Ukrainian conflict” that Russia proposed to publish after the possible Normandy format meeting.

The Normandy format talks are aimed at helping end the conflict in eastern Ukraine between Kyiv’s forces and pro-Russian separatists.

On 4 November French Foreign Minister Jean-Yves Le Drian and German Foreign Minister Heiko Maas said in a joint letter to Lavrov that Moscow’s draft had assessments that Germany and France did not share, such as the portrayal of an “internal Ukrainian conflict” among others.

Two European diplomats said the publication by Moscow appeared to be an attempt to sow confusion, but that it had backfired because it proved that Moscow was trying to block the process by demanding numerous preconditions that would make any hope of holding a meeting impossible.

Legendre called on Russia to return to the negotiating table and continue discussions, but in the “approved formats and according to agreed principles.”