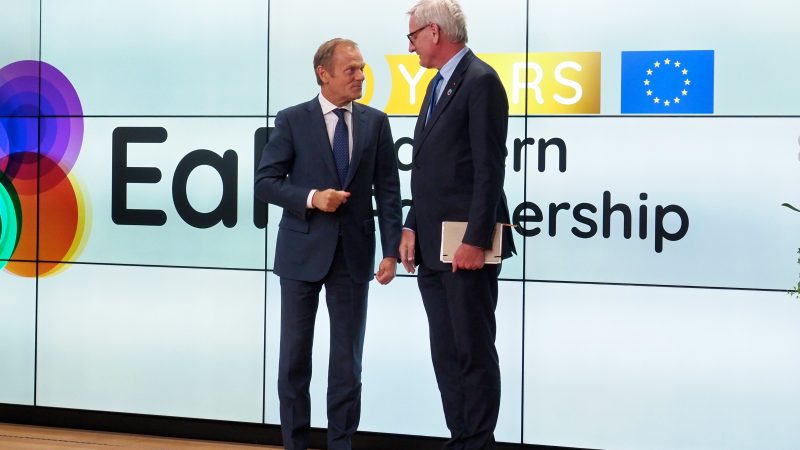 Donald Tusk and Carl Bildta at the 10th anniversary of the EaP, on 13 May 2019 in Brussels. Poland and Sweden were instrumental for the initiative. [Council newsroom]

The European People’s Party (EPP) has presented a proposal to enable faster and deeper sector-by-sector integration with the EU for the three countries within the Eastern Partnership (EaP) –  Ukraine, Georgia, and Moldova – that are looking for a more ambitious integration with the bloc.

Ukraine, Georgia and Moldova have publicly stated that their aim is to become EU members. The other three countries from the EAP have no such plans. Belarus and Armenia have joined the Russia-led Eurasian economic Union, while Azerbaijan, rich in fossil fuels, seeks to maintain equal distance from the big powers.

The new proposal – presented at the ‘EU Eastern Neighbourhood Forum’ on 12 November –  echoes calls made by the Ukrainian foreign minister to apply a “differentiation principle” to the three EaP frontrunners who have concluded Association Agreements with the EU (Ukraine, Georgia, Moldova) at a recent ministerial dialogue in Stockholm.

Foreign ministers of the three EaP countries with ambitions of joining the EU discussed the creation of an additional format of cooperation within the framework of the Partnership in Sweden on 5 November.

On that occasion Ukraine’s Vadim Prystayko stressed that Ukraine, Moldova and Georgia are ready for closer integration with the EU in the fields of energy, trade, transport, digital economy, customs and security cooperation.

“We appreciate the mechanism of the Eastern partnership. We’re not big fans of it, but, okay, we accept it and appreciate what it’s doing,” Ukraine’s deputy prime minister, Dmytro Kuleba, recently told EURACTIV. He suggested the EU’s policy should be brought closer to reality.

“We have this notion of ‘Association trio.’ And the European Union can easily differentiate us by offering us specific joint projects which will bring us closer to the EU and which will serve the purposes of integration,” said Kuleba, offering the example of free roaming.

The “Trio 2030 Strategy” initiative presented by the Lithuanian MEP Andrius Kubilius in the European Parliament on 12 November proposes similar solutions to continue to incentivise reforms.

The document prepared by the EPP’s Lithuanian delegation outlines the creation of a ‘Trio Process’, which would see a differentiated treatment of the three countries on the EU side and could lead to the establishment of new institutions and policy instruments.

The proposal comes during a crisis of the EU’s overall enlargement policy that has prompted calls for a new strategy for the EU’s neighbourhood.

“We need to show a political perspective” to the Trio, Kubilius told EURACTIV. “The EU has to respond to their ambition to implement EU-related reforms and we need to sustain this implementation. This is how the principle of ‘more for more’ works.”

The ‘Trio Process’ is modelled after the ‘Berlin Process’ initiated in 2014 by Germany to reinvigorate the Western Balkan EU integration reforms. Some, however, have questioned the effectiveness of the Berlin Process.

“On the diplomatic level, it was successful”, said Dušan Reljić from the German Institute for International and Security Affairs. “On the second level – meaning economy, development and connectivity – I am sceptical. I do not see that the Berlin Process has achieved very much”.

Kubilius disagreed. “The ‘Berlin Process’ was exactly in time to reinvigorate EU-related reforms of the Western Balkan countries when the incoming Commission in 2014 stated it was not yet time to move forward with EU enlargement”, he said. The Commission then changed its views in 2018 and proposed a strategy with possible accession in 2025.

“We would claim this process has indeed delivered results to keep Western Balkan countries on the track of reforms,” argued Kubilius, who has served twice as Lithuania’s prime minister.

“We agree from the Commission’s view very much on the importance within this differentiated approach of finding ways to move ahead,” Christian Danielsson, head of the Commission’s directorate general responsible for the neighbourhood policy, told the EU Eastern Neighbourhood Forum.

“We already have achieved a substantial degree of differentiation” said the official, pointing to the Association agreements, visa-free regime and increased political dialogue.

“We need to do more to address the outstanding issues,” said Danielsson, emphasising the issue of governance. “That means, in concrete, more rule of law, more efforts when it comes to fighting corruption, more when it comes to independent media, more to be done also to involve civil society.”

“The strength of the EU’s engagement with the Eastern Partnership countries”, which also includes Belarus, Armenia and Azerbaijan, is the “combination of differentiation and inclusiveness” explained Danielsson.

“Although our natural trend … is to reward your best friends,” differentiation should not come at the expense of inclusiveness, agreed Luc Devigne, the director for Eastern partnership at the EU’s diplomatic service, the EEAS.

“There can be further differentiation but we need to do two things,” said Devigne. “First, we need to keep everybody on board, both in Eastern partners and member states and secondly, we really need to focus on what was notoriously, in consensual way, the least successful” agenda item, “and that’s rule of law and good governance.”

“You should put forward a new set of long-term policy objectives for the Eastern Partnership by mid-2020,” the incoming Commission President Ursula von der Leyen wrote in her mission letter to the new neighbourhood and enlargement policy chief, Hungary’s Olivér Várhelyi.

The European Parliament accepted Várhelyi on Monday (18 November), after Hungary’s first Commissioner pick was rejected, and will vote on the entire von der Leyen Commission at a plenary in Strasbourg on 25-28 November.