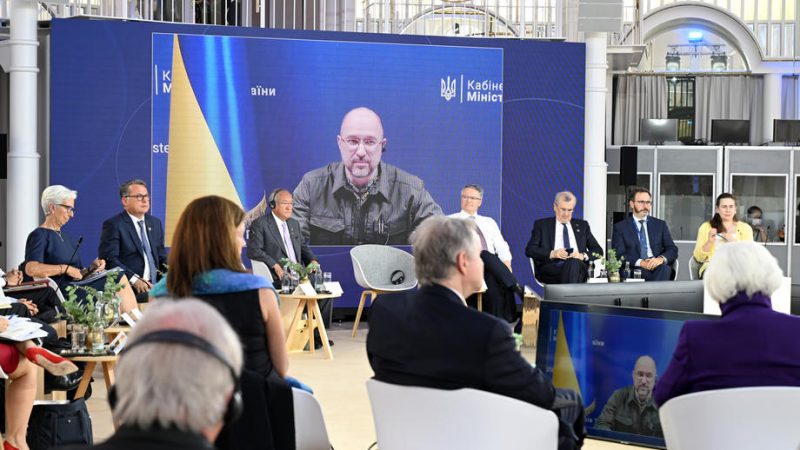 The Group of Seven’s financial leaders agreed on Thursday (19 May) on $18.4 billion to help Ukraine pay its bills in coming months and said they were ready to stand by Kyiv throughout its war with Russia and do more if needed, a draft communique showed.

Finance ministers and central bank governors of the United States, Japan, Canada, Britain, Germany, France and Italy – the G7 – are holding talks as Ukraine, invaded by Russia on 24 February, is struggling to fend off the attack and is running out of cash.

“In 2022, we have mobilised $18.4 billion of budget support, including $9.2 billion of recent commitments,” the draft communique seen by Reuters said.

“We will continue to stand by Ukraine throughout this war and beyond and are prepared to do more as needed,” it said.

In the draft, the G7 welcomed the European Commission’s proposal on Wednesday to lend €9 billion to Ukraine and noted that the European Bank for Reconstruction and Development and the International Financial Corporation planned support worth $3.4 billion. But it was not clear if these funds were part of the $18.4 billion or separate.

Earlier on Thursday, German Finance Minister Christian Lindner said Germany would grant Ukraine €1 billion and Japan pledged to double its aid for Ukraine to $600 million to help it cover its near-term needs.

Finance ministers from the Group of Seven are holding talks in Koenigswinter in western Germany, under German presidency of the group. 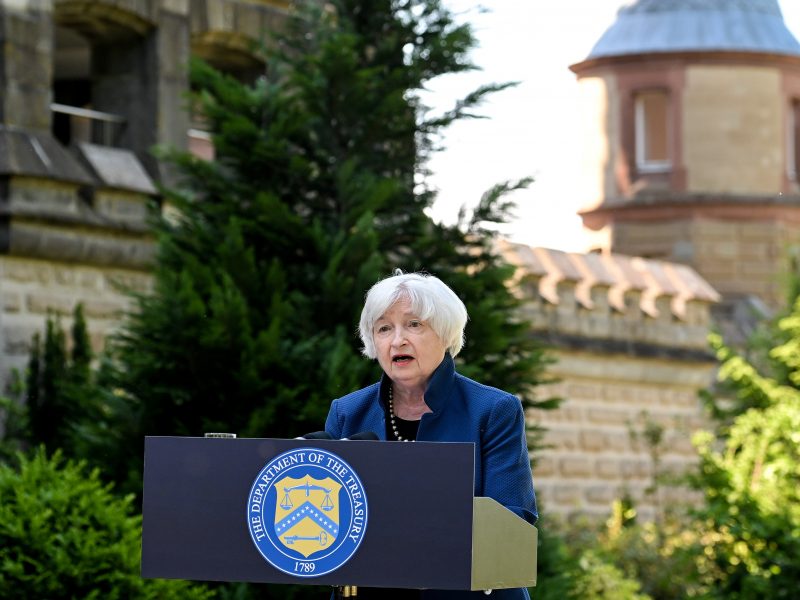 G7 partners meet Thursday (19 May) hoping to find a solution for Kyiv’s budget troubles as the fallout from Russia’s invasion of Ukraine continues to roil the global economy.

Ukraine estimates it needs some $5 billion a month to keep public employees’ salaries paid and the administration working despite the daily destruction wrought by Russia.

The war has been a game-changer for Western powers, forcing them to rethink decades-old relations with Russia not only in terms of security, but also in energy, food and global supply alliances from microchips to rare earths.

More broadly, the G7 policymakers are wrestling with the question of how to contain inflation and increase sanctions pressure on Russia without causing recession.

More and more officials have brought up the term “stagflation” – the dreaded 1970s combination of persistent price increases coupled with economic stagnation.

“G7 central banks are closely monitoring the impact of price pressures on inflation expectations and will continue to appropriately calibrate the pace of monetary policy tightening in a data-dependent and clearly communicated manner, ensuring that inflation expectations remain well anchored, while being mindful to safeguard the recovery and limit negative cross-country spillovers,” the draft said.

The European Commission proposed on Wednesday to set up a fund of unspecified size of grants and loans for Ukraine, possibly jointly borrowed by the EU, to pay for post-war reconstruction.

The G7 said they were supportive, but avoided any detail.

“We call on all partners to join us in supporting Ukraine´s long-term recovery and to ensure the massive joint effort for reconstruction is closely coordinated, including with the Ukrainian authorities and international financial institutions,” the draft said.

Economists’ estimates of the cost of rebuilding Ukraine vary widely between €500 billion and €2 trillion, depending on the assumptions on the length of the conflict and the scope of destruction.

With sums of such magnitude, the EU is considering not only a new joint borrowing project, modelled on the pandemic recovery fund, but also seizing the now frozen Russian assets in the EU, as sources of financing.

Some countries like Germany, however, say that the idea, though politically interesting, would be on shaky legal grounds and the G7 draft communique did not mention the issue.

US ‘stands by Ukraine’

US Treasury Secretary Janet Yellen said the G7 finance leaders agreed to provide Ukraine the financial resources it needs in its struggle against Russia’s invasion, and that policymakers are determined to meet their inflation targets.

Yellen said the $40 billion US which was approved later the same day by the US Senate this week includes $7.5 billion in new economic aid.

“The message was, ‘We stand behind Ukraine. We’re going to pull together with the resources that they need to get through this,'” Yellen said.

She said that high global inflation was a significant topic, but none of the policymakers had said they were considering raising their targeted inflation rates.

“What was discussed was the critical importance of central banks taking the actions that are needed to show they are committed to the inflation targets that they’ve set,” Yellen said.

Yellen said the officials felt that economic conditions had not changed ” so fundamentally, that it would be worth dislodging what we felt it become a stable anchored set of inflation expectations.”

She said that she still believed that the US Federal Reserve could achieve a “soft landing” of the economy without causing a recession, but how Fed officials achieve this is up to them though it “requires both skill and luck.”

Discussions about mechanisms to reduce Russia’s revenues from oil exports to Europe were limited on Thursday, Yellen said, adding that there is a lot of interest in the concept.

US officials have floated the idea of imposing tariffs on Russian oil to limit the amount of revenue that Moscow can collect while keeping Russian crude supplies on the market as EU officials pursue a phased embargo by year end.

Yellen said that a buyers’ cartel that would not buy oil above certain prices could be successful if it is large enough.

“Nothing is really crystallized as an obvious strategy,” she added.

The G7 meeting wraps up on Friday.