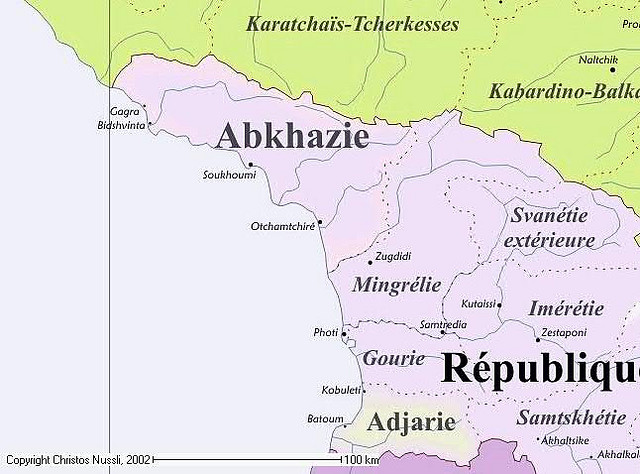 The agreement drew strong criticism from NATO and the European Union.

NATO Secretary-General Jens Stoltenberg said in a statement the “so-called treaty” did not contribute to a peaceful and lasting settlement of the situation in Georgia, and the Western alliance would not recognise it.

EU foreign policy chief Federica Mogherini said in a statement the agreement violated Georgia’s sovereignty and territorial integrity and was “detrimental to ongoing efforts to stabilise the security situation in the region.”

Russia and Georgia fought a war in 2008 over Abkhazia and a twin region of South Ossetia, provoking the worst crisis between Moscow and the West since the fall of the Soviet Union.

Putin and Abkhazia’s leader Raul Khadzhimba signed the agreement in Sochi, the Black Sea resort across the Russian border from the separatist region.

Georgia’s Foreign Minister Tamar Beruchashvili denounced the move as “a step towards annexation of Abkhazia by the Russian Federation”.

“The signing of this document will have a negative impact on the security situation in Georgia’s occupied territories as well as in the broader context of European security,” she said, adding the deal infringed Georgia’s territorial integrity.

Under the terms of Monday’s accord, Putin said Russia would grant 5 billion rubles (€90 million) to Abkhazia, whose population of 240,000 comprises a mix of ethnic groups.

The agreement, posted on the Kremlin website, envisages a “joint defence and security space” and stipulates Russian “protection of the state border of the Republic of Abkhazia with Georgia.”

It obliges Russia to facilitate “in every possible way” growing Abkhazia’s international ties and promoting its global recognition.

Moscow would also ease requirements for Abkhazia residents to obtain Russian citizenship, but it has not voiced plans to annex the territory.

Some Georgian officials say Putin may now sign a similar deal with South Ossetia, which already depends on Russia’s financial and political support, although it has less strategic, geographic importance for Moscow than Abkhazia.