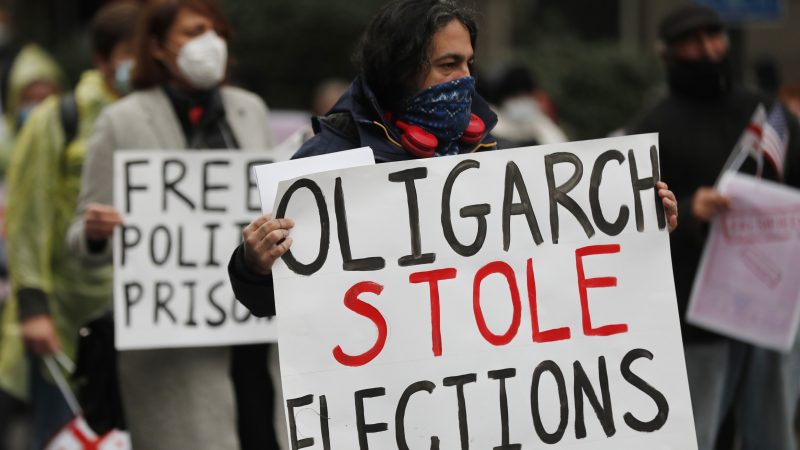 People attend an opposition rally in Tbilisi, Georgia, 18 November 2020, on the day of US Secretary of State Mike Pompeo's visit to Tbilisi. Members of Georgian opposition protest against the results of the election and demand new parliamentary election in Georgia. [Zurab Kurtsikidze/EPA/EFE]

Gakharia said he was stepping down because of disagreement in the government over enforcing the court order to arrest opposition leader Nika Melia.

“It is inadmissible to enforce a judiciary decision… if that poses a risk to the health and lives of our citizens or creates the possibility of a political escalation in the country.”

Nika Melia, the leader of the main opposition party in Georgia – the United National Movement – was reportedly arrested after a court ruled on 17 February that he should be remanded into custody for failure to post bail.

Representatives of almost all opposition parties in Georgia, civil activists, and prominent public figures gathered at the office of the National Movement.

The leader of the National Movement, Nika Melia, is accused of participating in the riots on 20-21 June 2019, and calling for parliament to be stormed. This marked the beginning of protests in Georgia which continued for a year.

The website JamNews reminds that Nika Melia case has been ongoing since 2019. The latest decision was to release him on bail. Now the judge of the Tbilisi City Court, Nino Chakhnashvili, granted the petition of the Prosecutor General’s Office to replace bail with a custodial measure.

Judge Chakhnashvili’s name has been featured in several other high-profile cases that many in society consider to be politically motivated.

In June 2019 the parliament suspended Melia’s immunity. The prosecutor’s office released him on bail of GEL 30,000 [approximately $10,000] and additional restrictive measures. In particular, Melia was obliged to wear an electronic tagging bracelet.

The case took another twist after Melia called the bracelet “a symbol of injustice”, took it off, and threw it into a crowd at a large-scale rally in Tbilisi on 1 November 2020. Several thousand people gathered at that rally to protest against the rigging of the 31 October parliamentary elections.

Melia refused to post bail and said that the court and the prosecutor’s office are “bought by [the oligarch and de facto ruler of Georgia Bidzina] Ivanishvili”.

On 31 October 2020 Melia again became an MP in the newly elected parliament. Therefore, the issue of his immunity was considered for a second time.

Since the October 2020 parliamentary elections, Melia, as well as approximately 50 other MPs elected from the opposition bloc, has been boycotting their seats in parliament.

Melia became the chairman of the United National Movement on 25 December 2020.

Melia is accused of fomenting violence during mass protests that erupted in Tbilisi in June 2019 after a Russian lawmaker addressed parliament from the speaker’s seat, a controversial move in a country where ties with Moscow remain strained after a brief war in 2008.

The rallies saw thousands of protesters clash with police who used tear gas and rubber bullets against the crowds, injuring scores of demonstrators.

Then-interior minister Gakharia led the police crackdown and was appointed premier in September 2019.

Dubbed by the opposition as “Moscow’s man”, Gakharia, 45, worked in Russia as a regional director for German aviation company Lufthansa and is a graduate at Moscow’s Lomonosov University.

In a statement ahead of Melia’s trial, the European Union envoy to Georgia described the circumstances surrounding Melia’s prosecution as a “dangerous trajectory for Georgia and for Georgian democracy.”

The US embassy in Tbilisi said on Twitter that the crisis “must be resolved peacefully”, urging both the government and the opposition to show restraint.