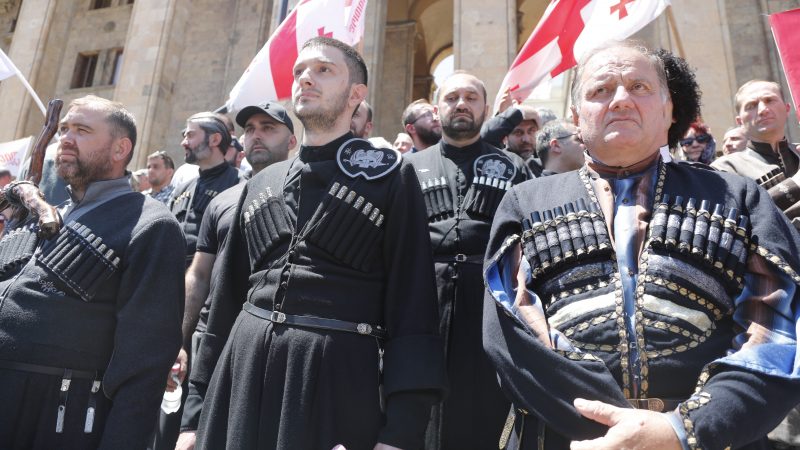 Pride events are still controversial in Georgia, a conservative country where the powerful Orthodox Church has previously butted heads with Western-leaning governments over progressive social issues.

On Monday morning, hundreds of anti-LGBTQ protesters including activists from a small pro-Russian party removed a European Union flag outside parliament and vowed to disrupt the Pride march scheduled later in the day.

so this happened at georgia,tbilisi today. Some (homophobic) group of people started attacking innocent people at tbilisi pride. and many of them are still not arrested. pls rt. pic.twitter.com/FQnJFg03pR

Several journalists covering the events were hospitalised with bruises and fractures.

#Georgia: IPI is deeply concerned by reports that over 20 journalists were physically attacked by far-right protesters this morning as they reported on Pride events in #Tbilisi. Interior Ministry investigation must ensure those responsible are quickly identified & prosecuted pic.twitter.com/cYPAB5INXC

Independent broadcaster Formula TV reported that a Polish tourist man had been stabbed, allegedly for wearing an earring.

Following the violence, organisers of the Pride march posted a statement on Facebook at 3:00 pm (1100 GMT) — three hours before the event was due to start.

“We cannot risk human lives and take to the streets, which are full of violent attackers,” they wrote.

“The march will not be held today.”

The offices of the Tbilisi Pride organisation had also been raided by “homophobic attackers”, they added.

“Throughout the day, we were secretly changing locations to escape assailants but they were appearing there ahead of us,” Pride march organiser Giorgi Tabagari told AFP.

Earlier in the day, Prime Minister Irakli Garibashvili had denounced the event as “unacceptable for a large segment of Georgian society”.

The “holding of the so-called Pride march is not reasonable as it creates the threat of civil confrontation”, he told a cabinet meeting.

“The opposition headed by (exiled former president Mikheil) Saakashvili is behind the Pride march, which is aimed at provoking civil confrontation and turmoil,” he added.

The Orthodox Church had called on supporters to gather Monday afternoon for a public prayer against the Pride march.

These groups are seen as supporters of the ruling party and have staged protests against pro-Western opposition parties.

The US and EU diplomatic missions in Georgia, together with the embassies of 16 other countries including Britain, France and Germany, issued a joint statement condemning the government’s stance.

“We condemn today’s violent attacks on the civic activists, community members and journalists, as well as the failure of the government leaders and religious officials to condemn this violence…,” it said.

“Violence is simply unacceptable and cannot be excused.”

Last week, the embassies had urged the government to “secure the right to peaceful assembly for all people in Georgia without exception”.

In recent years, Pride-related events have been violently disrupted by far-right activists and ultra-conservative supporters of the Orthodox church.

Pride organiser Tabagari told AFP: “We feel growing solidarity from Georgian society and from politicians, but there are still violent homophobic groups.”

Georgia decriminalised homosexuality in 2000, and adopted anti-discrimination laws in 2006 and 2014.