Fresh protests took place Monday (9 November) in Tbilisi as thousands of people hit the streets a day after police cracked down on demonstrations against Georgia’s recent general elections.

Protests erupted in Tbilisi and the Black Sea city of Batumi following a 31 October parliamentary poll won by the ruling Georgian Dream party with a two-percent margin, but which the opposition has denounced as rigged. 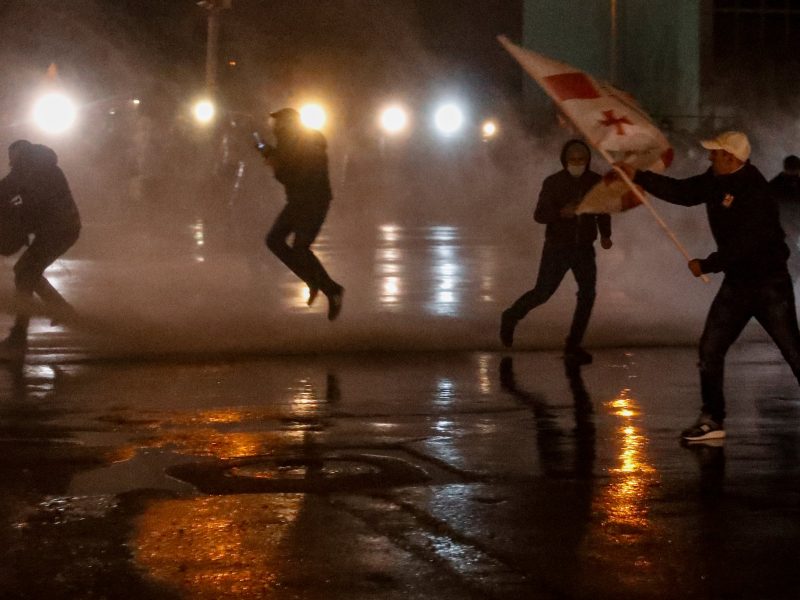 Some 8,000 protesters gathered outside Georgian parliament in response to a call by opposition parties that refuse to enter the new parliament, raising fears of another political crisis in the Caucasus nation.

Elections in Georgia often lead to accusations of fraud and large demonstrations.

Demonstrators have since vowed permanent protests until new elections are called — a demand that Georgia Dream has rejected.

“Our ranks will not waver, our protests will continue until we achieve the holding of free and fair elections in Georgia,” Nika Melia, an UNM leader, told the crowd before announcing another protest at the end of the week.

“We are defending our votes and will continue our struggle until our demand is met,” demonstrator Levan Meburishvili, 22, told AFP.

On Sunday, 45,000 protesters rallied outside parliament before marching several kilometres (miles) across the city towards the central election commission headquarters, threatening to blockade its entrances.

Georgia’s rights ombudsperson Nino Lomjaria denounced the use of “disproportionate force against demonstrators.”

Gakharia, who has tested positive for the coronavirus, has been in self-isolation for a week and announced a night curfew starting Monday.

Some protesters and opposition leaders nonetheless vowed to stage round-the-clock rallies outside parliament.

The electoral commission has yet to confirm provisional results that showed Georgian Dream had won 48% of the votes, against 46% for opposition parties, in a proportional ballot that decides 120 of the legislature’s 150 seats.

International monitors from the Organization for Security and Co-operation in Europe (OSCE) said the vote was “far from flawless” but that “fundamental freedoms were respected.”