A Georgian national flag flying at half mast at the Georgian government building, in Tbilisi, Georgia 07 August 2018, in memory of those killed in the August war conflict between Georgia and Russia in 2008 as many memorial events are planned in Georgia to mark ten years anniversary of the conflict. [EPA-EFE/ZURAB KURTSIKIDZE]

Foreign affairs chiefs from Poland, Lithuania, Latvia and Ukraine met in Georgia this week to take part in commemorations marking 10 years since Russia’s 2008 invasion of the Caucasus Republic and reiterate hopes that the country could soon join NATO.

During their joint appearance on Tuesday (7 August), the foreign ministers recalled the events of 7 August 2008, when Russia carried out armed aggression against Georgia, resulting in more than 150,000 people having to leave their homes and over 400 dead Georgian soldiers.

The ministers called on Russia to rethink its decision to recognise the independence of the separatist regions of Abkhazia and South Ossetia.

Together with Ukraine, they also issued a joint statement demanding “full implementation of the ceasefire agreement”, involvement in the process of International Geneva Conversations and the admittance of the EU’s Monitoring Mission to the occupied territories of Georgia.

“Revisionist powers are not easy to satisfy, and even more difficult to rely on. Ten years ago, on their journey to Georgia, our leaders had stopped in Crimea, Ukraine. Today the repetition of this route was not possible because of the illegal annexation of the Autonomous Republic of Crimea and the city of Sevastopol by Russia,” the statement said.

But neither self-proclaimed authorities, despite enjoying Moscow support from the outset, are  still not legally recognised by other countries except by Venezuela, Nicaragua, Nauru and Syria. 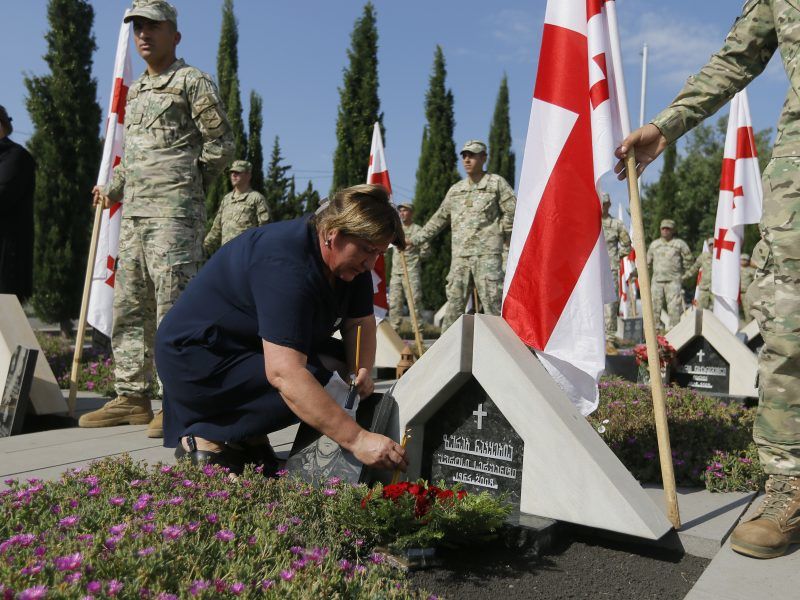 “Together with the Georgian authorities, we would like to remind the world about the violation of Georgia’s independence, the tragedy of thousands of families expelled from their homes, hundreds of people killed and wounded,” Polish Foreign Minister Jacek Czaputowicz said.

“We want to remind you of the first military aggression of a neighbouring country in the post-war history of Europe to a sovereign state and the occupation of its territory, which has continued to this day.”

Czaputowicz also recalled the words former Polish President Lech Kaczyński made during his visit to Tbilisi in 2008 together with the presidents of Estonia, Lithuania and Ukraine and the Latvian prime minister, which was meant as a message of support to Georgian independence in the first days after the Russian invasion.

“We know very well – today Georgia, tomorrow Ukraine, the day after tomorrow the Baltic States, and later maybe the time for my country – Poland,” he repeated.

“These words, as shown by later events, unfortunately, in part, turned out to be prophetic and seem to be still valid,” said Czaputowicz, referring to the ongoing Ukraine crisis. 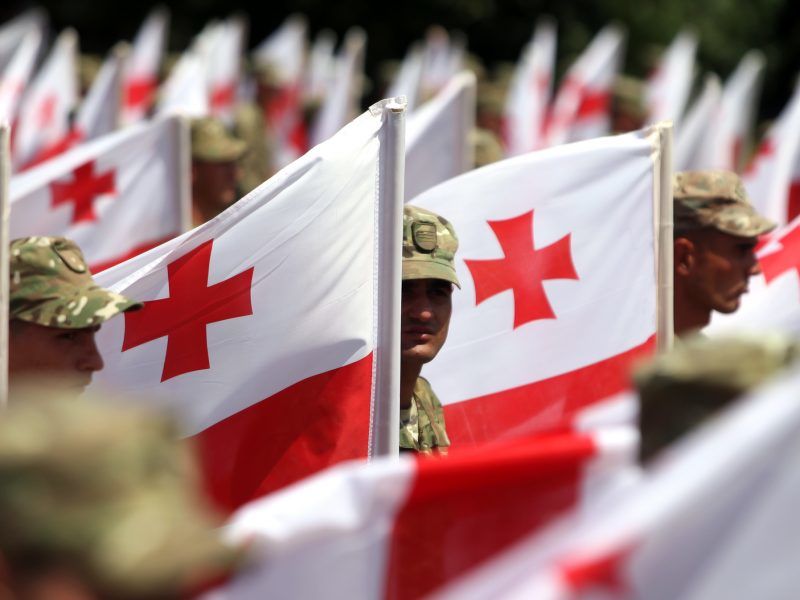 He added that “Russia’s aggressive policy in the region, the lack of will to regulate the conflicts caused by the Kremlin, is a serious threat to post-war order in Europe and compliance with international law.”

Lithuanian Foreign Minister Linas Linkevičius added that given its presence in the Crimean peninsula, Russia is also currently occupying Ukrainian territory, insisting that there is need for solidarity and support with the Eastern Partnership.

“We also want to remind you that what happened in Georgia, where 20% of the territory was occupied, should not be repeated because sometimes we are too weak in our reactions,” he added.

Latvian Foreign Minister Edgars Rinkevics said that international law and order were violated in Georgia ten years ago and that it is still “important” and necessary to remind the world about it.

He added that the EU made a “big mistake” in letting it pass without consequence, adding that “we have to do everything to prevent this from happening again”.

The two Baltic nations and Poland stressed that they are striving to make Georgia and Ukraine members of NATO.

“This visit will not only be symbolic, but we will also talk with our colleagues, president and prime minister, Georgia’s foreign minister, how we can specifically support them in cooperation with the EU and NATO,” Rinkevics added. 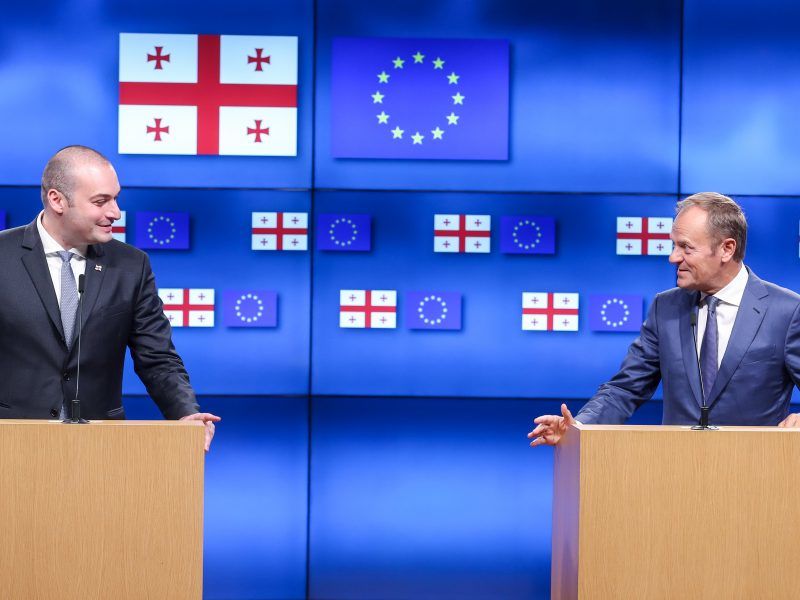 Earlier this summer, NATO leaders discussed closer ties with Georgia and Ukraine at their summit in Brussels.

Eastern European countries, which were formerly in the Soviet Union’s sphere of influence, have in recent years frequently campaigned in favour of the two countries’ accession. However, countries with ongoing territorial conflicts cannot join the Alliance, according to NATO rules.

Nevertheless, a survey recently conducted by the Georgian National Democratic Institute (NDI) revealed that  domestic support for Georgia’s accession to NATO and the EU is on the rise compared to previous years.

While around 75% of Georgians said they were in favour of a possible Georgia’s accession to NATO, 81% voiced support for EU membership.

But since 2008, when NATO leaders promised Georgia it would one day join the EU and NATO, the Western dream of the small Caucasus country has been a source of anger for its northern neighbour Russia. 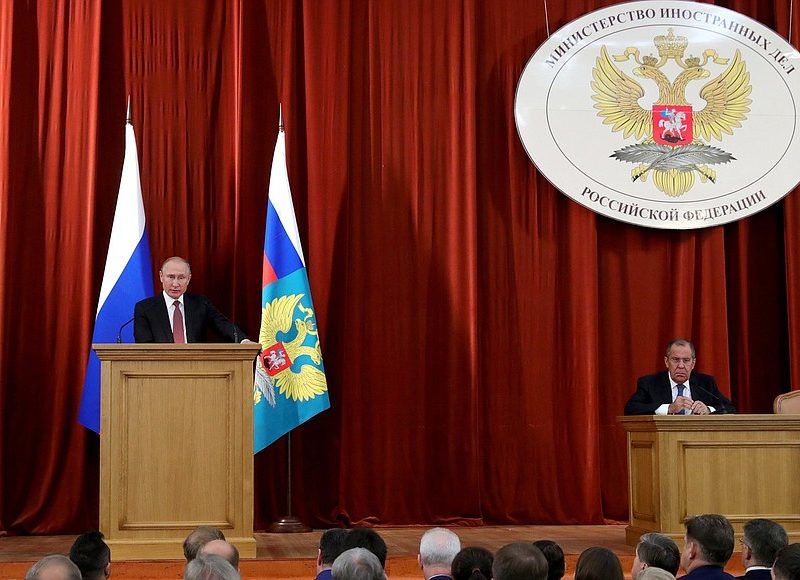 Russia’s deputy foreign minister, Grigory Karasin, told Russian news agency TASS that Tbilisi and other world capitals should draw conclusions from the August 2008 events and understand that any act of aggression will inevitably entail punishment.

Russian President Vladimir Putin, speaking to Russian diplomats in Moscow, last week spoke out against what he said was NATO’s attempts to deploy new bases and military infrastructure near Russia’s borders.

“We will respond appropriately to such aggressive steps, which pose a direct threat to Russia,” Putin warned.