German-Russian Petersberg Dialogue to be resurrected under new guise 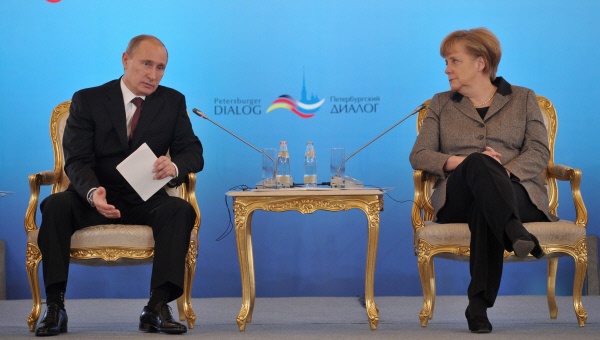 Germany and Russia are set to resume the Petersberg Dialogue for the first time since the forum was cancelled last year. [Valdaiclub]

German and Russian delegates will meet once again at a reformed-Petersberg Dialogue, the first meeting since the forum was cancelled last year. EURACTIV’s partner Tagesspiegel reports.

Tsar Nicholas II and President Theodore Roosevelt were the first official guests at the old Kaiserbahnhof station in Potsdam. On 22 and 23 October, the UNESCO site will welcome up to 200 German and Russian representatives for the Petersberg Dialogue. It will be the first meeting of the forum since the beginning of the war in Ukraine.

Last October, a meeting was planned at the Black Sea resort of Sochi, but was cancelled at short notice by the Germans. In the build up to the event, many organisations had announced their intention not to attend the forum due to the Ukraine crisis and the pressures that came with it. They also called for reforms of the discussion to be carried out.

The late Andreas Schockenhoff (CDU) and Marieluise Beck of the Greens, along with the CDU-affiliated Konrad Adenauer foundation and the Green-affiliated Heinrich Böll foundation, set out their demands for reform in a key issues paper.

The critics received support from the Chancellery. The Sochi event was “postponed” following a phone call between Chancellor Angela Merkel and President Vladimir Putin. Germany’s cooperation coordinator, Gernot Erler, regretted that the forum had to be cancelled.

The reforms were kicked off by a change of leadership. Lothar de Maizière, the previous chairman, had to go. His replacement was announced as former Chancellery chief of staff and current Deutsche Bahn board member, Ronald Pofalla.

He was considered to be the favoured candidate of the Chancellor. Pofalla has attempted to instigate mediation between the two camps on numerous occasions.

The association, which organises the Dialogue, mirrors the direction of German policy toward Russia. Some want the Dialogue not just to be limited to pro-Kremlin figures, but to be open to civil society organisations in particular. There are also those who want the discussion to include Russia’s ruling elite.

The first group want to address the shortcomings of the German-Russian relationship, yet the others are wary about angering their Russian partners. The Petersberg Dialogue reform was a “difficult birth”, said Erler. In the meantime, a new structure has been put into place. “A lot now depends on Mr Pofalla, and how he intends to organise the work.”

Dialogue opened up to new members

Up until now it has had a closed doors policy, but now it is open to new members. More than 20 representatives of foundations and organisations that have been dealing with Russia on a long-term basis have been included. On the new board is Stefanie Schiffer of European Exchange, a Berlin-based NGO, and Wolfgang Büchele, CEO of the Linde Group. Also new to the board is Franz Josef Jung (CDU).

Pofalla brought Marieluise Beck onto the board as well. In addition to these appointments, the ex-Minister President of Brandenburg, Matthias Platzeck (SPD) was elevated to leader of the German-Russia forum. This reportedly happened after a request from the foreign minister, Frank-Walter Steinmeier (SPD). The former chairman, Lothar de Maizière, was made an honorary member.

Following after a German politics model

There were no controversial discussions at the general meeting. Pofalla announced the reform package, which had been painstakingly negotiated. “The way compromises have been struck is reminiscent in some ways of how Pofalla used to manage the Grand Coalition at the Chancellery,” said Stefan Melle, director of German-Russian exchange. This approach has its advantages and disadvantages.

Melle warns that issues like the Ukraine conflict and Russian development should not just be dealt with in passing. According to its critics, the reform process has not been completed yet. “The Petersberg Dialogue has been set in motion,” said Beck. Now the aim is to make it possible to have more debates in the context of “big events”. Currently, working group meetings away from the limelight are significantly more animated.

In the past week, German and Russian representatives from the working group on civil society met together in Moscow. The meeting in the office of human rights organisation Memorial lasted nearly three hours. They discussed the controversial “foreign agent” law, in which the status of an organisation is altered if it receives monetary aid or support from abroad.

If organisations do not abide by this law then they face heavy fines that could threaten their very existence, said Erler after the Moscow meeting. “The work of the civil society in Russia will be significantly affected.” He cited Memorial as an example.

Moscow is using the law to take action against “undesirable” international organisations. The National Endowment for Democracy, a US foundation, was the first that had to shutter its operation in Russia. “Behind this obsession lies the fear that foreign foundations will attempt to instigate a regime change,” said Erler.

On an internal list of undesirable organisations, there are six other US foundations, as well as three from Ukraine and Poland. “So far, no German foundations are on the list, but that isn’t something that can be guaranteed,” he added.

Ukraine conflict not on the official agenda

In Potsdam, this issue is not on the agenda. The topic had already been discussed at length in Moscow, said Erler. The civil society working group, which he leads, wants to tackle the refugee crisis.

Another issue that will loom over the Potsdam talks like an “elephant in the room” is the Ukraine conflict. But who will want to discuss for two days arguments that are already well known?

Erler notes that issues of major policy and diplomacy are perhaps not appropriate for the Petersberg Dialogue, yet Beck points out that an issue such as Ukraine cannot be ignored in the talks, but that “a Ukraine debate cannot take place within the framework of a Berlin-Moscow relationship”. In the end, Pofalla pledged to raise the issue in Potsdam.