By Alexandra Brzozowski and Oliver Noyan | EURACTIV.com and EURACTIV.de 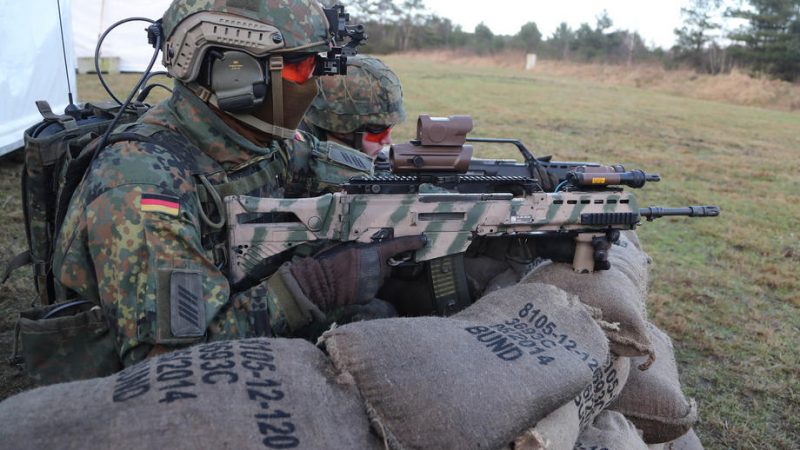 Infantrymen during the visit of German Minister of Defense Christine Lambrecht at the 9th Panzerlehr Brigade of the German Bundeswehr in Munster, northern Germany, 07 February 2022. [EPA-EFE/FOCKE STRANGMANN]

Germany will establish a special defence fund worth €100 billion to increase the country’s military’s operational capabilities after years of neglect, Chancellor Olaf Scholz announced on Sunday (27 February), in what could be seen as a major shift in Berlin’s defence spending.

This new announcement comes after Saturday’s historic shift by Germany on arms deliveries to Ukraine, which Scholz explained as: “in response to [Russian President Vladimir] Putin’s aggression, there could have been no other choice.”

“We will from now on, year for year, invest more than 2% of our gross domestic product in our defence,” Scholz told German lawmakers at an emergency session of the German Bundestag on Sunday morning.

He justified the move by referring to the attempt by the Kremlin to establish a ‘Russian Empire’, with Moscow using military force to reshape the international system, he told the Bundestag.

Berlin has long resisted pressure from the United States, notably under former US President Donald Trump, to raise its defence spending to 2% of its economic output in the light of its history.

According to NATO statistics, Germany is expected to have spent 1.53% of its GDP on defence in 2021.

The current German coalition government had previously been reluctant to commit to the target, despite pleas from NATO allies.

Now, Scholz announced the government had decided to earmark €100 billion for military investments from its 2022 budget. For comparison, Germany’s entire defence budget in 2021 was €47 billion.

He also called on all the parties in the Bundestag to “secure this special fund in our constitution”.

“We must invest significantly more in the security of our country in order to protect our freedom and our democracy in this way,” Scholz emphasised, adding that Germany needs a “powerful, state-of-the-art, advanced German Bundeswehr that reliably protects us.”

The move comes as high-ranking German military officials have warned of the disastrous condition of the country’s armed forces, which have suffered financial and equipment shortages for years.

“The Bundeswehr, the army I am allowed to lead, is more or less bare. The options we can offer the politicians to support the [NATO] alliance are extremely limited,” Alfons Mais, the 21st Inspector of the Army and commander of the troops, said on LinkedIn on Thursday.

In reference to the current state of the German Bundeswehr, Scholz said: “We need planes that fly, ships that sail, and soldiers who are optimally equipped for their missions.”

Germany could for example purchase US F-35 fighter jets built by Lockheed Martin to replace its ageing Tornado in the role of nuclear sharing, Scholz said.

At the same time, the chancellor emphasised that these military investments will be taken in close collaboration with France and other EU member states and that the next generation of European fighter jets and tanks should be developed jointly.

“These projects are of the highest importance for us,” he stressed.

The EU’s future Strategic Compass, the bloc’s upcoming military strategy document to be approved by EU leaders in March, seen by EURACTIV last year, includes a series of ideas for European capability development and funding.