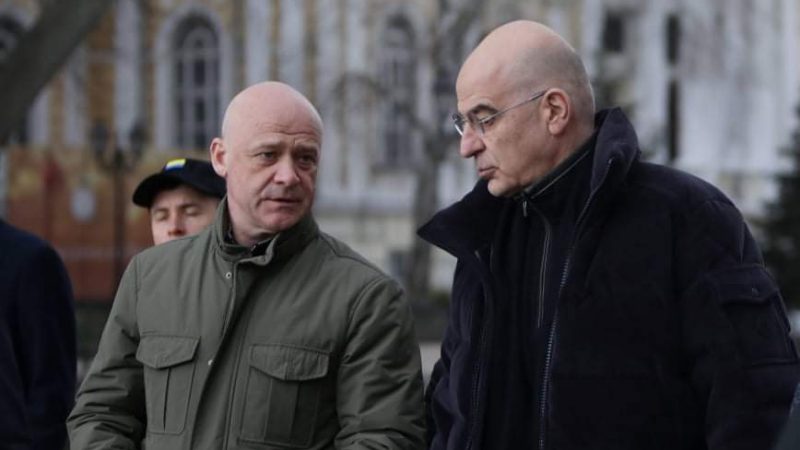 Nikos Dendias [R] in Odessa on 3 April 2022 with Mayor of the city Gennadiy Trukhanov. [Twitter account of Nikos Dendias]

Greece’s Foreign Minister Nikos Dendias arrived in Odesa on Sunday (3 April) at the head of a humanitarian aid mission into the southern port city of Ukraine, the foreign ministry said.

The humanitarian aid was handed to the city’s municipal authorities.

Dendias, 62, also aims to set up a continuous mechanism of distributing aid from Greece and to reopen the country’s consulate in the city.

“The reopening of (Greece’s) consulate will help distribute humanitarian aid and set up corridors for the Greek ethnic community to leave from any areas of Ukraine, if needed, via Odesa,” the minister said after upon his arrival in Odesa, according to a statement from the Greek foreign ministry.

Greece is present in #Odessa. From today on, the Greek Consulate will be operating again (statement to Greek journalists during my visit in Odessa). pic.twitter.com/CztYz2ROBo

Missiles struck Odesa in the early hours of Sunday.

Multiple Strikes are being reported this morning in the Ukrainian Coastal City of Odessa, there are Claims that a Fuel Depot and a number of Military Positions near the City Center have been Struck by Russian 3M-54 Kaliber Cruise Missiles fired from over/in the Black Sea. pic.twitter.com/EhTeY80rU8

Dendias said last month he planned to lead a humanitarian aid mission to the besieged city of Mariupol in Ukraine, where thousands of ethnic Greeks live, but intense fighting there meant the destination was subsequently changed to Odesa.

Ukraine’s troops have retaken more than 30 towns and villages around Kyiv, Ukrainian officials said on Saturday, claiming complete control of the capital region for the first time since Russia launched its invasion.

Russia has depicted its drawdown of forces near Kyiv as a goodwill gesture in peace talks. Ukraine and its allies say Russia was forced to shift its focus to east Ukraine after suffering heavy losses.