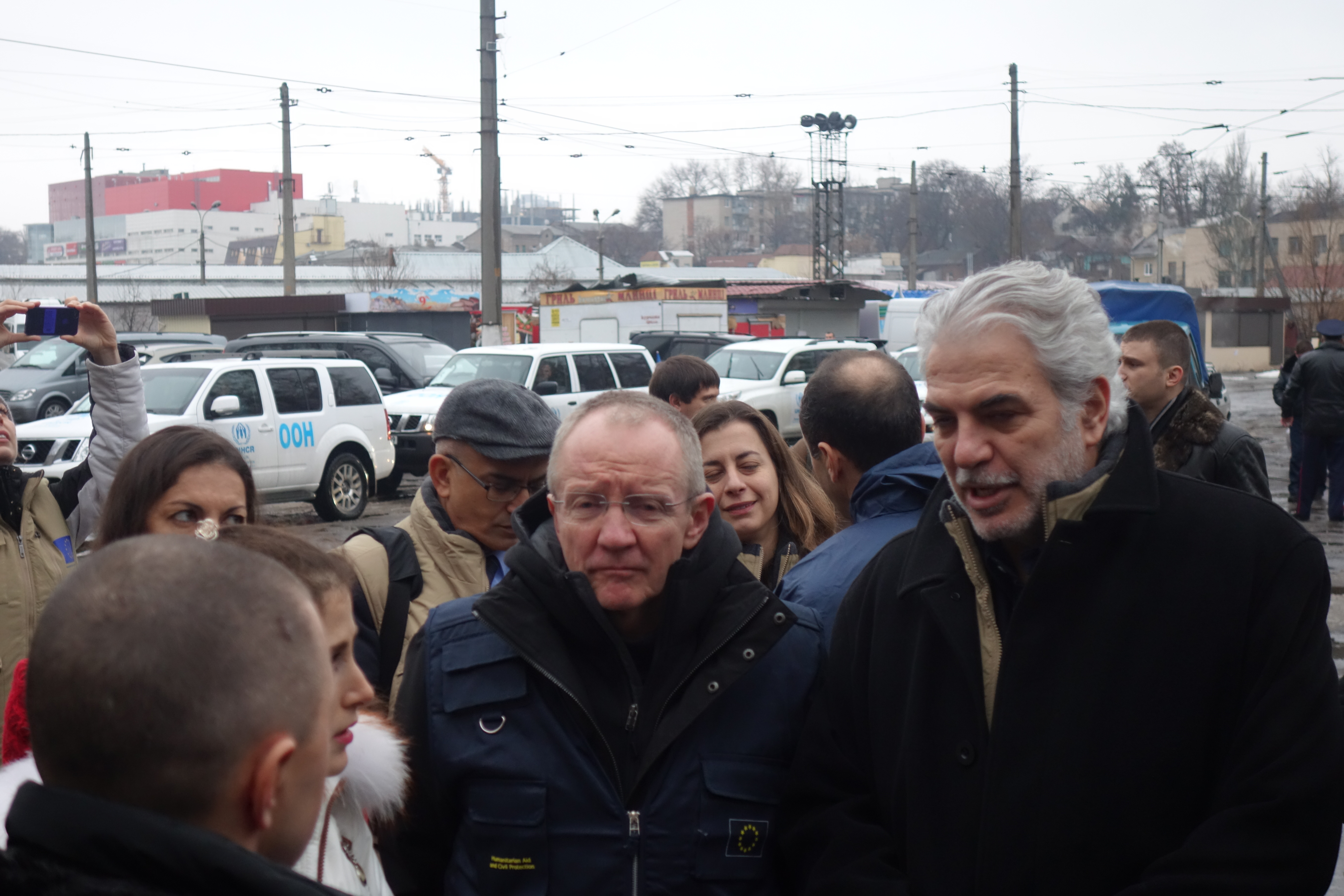 A senior United Nations official warned Tuesday (3 February) that the humanitarian situation in eastern Ukraine was becoming untenable for millions of people, and urged “all sides” to halt the dangerous escalation in the fighting in eastern Ukraine.

UN High Commissioner for Human Rights Zeid Ra’ad Al Hussein called on “States and all those with influence in the region” to take measures to ensure full compliance with the Minsk agreements, which in his words have a direct bearing on the human rights situation in the east of the country.

“Bus stops and public transport, marketplaces, schools and kindergartens, hospitals and residential areas have become battlegrounds in the Donetsk and Luhansk regions of Ukraine – in clear breach of international humanitarian law which governs the conduct of armed conflicts,” Zeid said.

“The death toll now exceeds 5,358 people, and another 12,235 have been wounded since mid-April last year. In just the three weeks up to February 1, at least 224 civilians have been killed and 545 wounded. Any further escalation will prove catastrophic for the 5.2 million people living in the midst of conflict in eastern Ukraine,” the UN official added.

Reports indicate that there has been a high civilian death toll from the indiscriminate shelling of residential areas in both government-controlled territory, as in the cities of Donetsk and Horlivka, controlled by the rebel groups. In the single most deadly incident involving civilians, at least 31 people were killed and 112 wounded in Mariupol, following two attacks by multiple launch rocket systems.

“The protection of civilians by all parties to the conflict must be of the utmost priority,” Zeid said, adding: “All violations of international humanitarian law and international human rights law must be thoroughly investigated and perpetrators must be promptly brought to justice.”

The High Commissioner also expressed concern about the implications of the harsh winter months on civilians in conflict-affected areas, with shortages of food and water, and power cuts. The plight of these civilians has been compounded by Ukrainian government decisions that have resulted in further restrictions on the freedom of movement and socio-economic isolation. The prolongation of the conflict would make the humanitarian situation untenable for millions of people, Zeid stressed.

“The public declarations by representatives of the armed groups, rejecting the ceasefire agreement and vowing to scale up the offensive are extremely dangerous and deeply worrying,” Zeid stated. “They add to the terrifying predicament of the civilians who are trapped in the areas, and the total breakdown of law and order. I urge all States with influence to work together to ensure that parties to the conflict immediately cease hostilities and abide by earlier ceasefire decisions.”

On a mission to Ukraine accompanying EU Humanitarian Aid and Crisis Response Commissioner Christos Stylianides last week, EURACTIV saw an NGO-run centre for internally displaced persons in the centre of Dnepropetrovsk, some 200 KM from Donetsk.

The situation downtown looked dismal. A military-type tent was packed with women, largely from Donetsk and Lugansk, waiting to be “processed”, before obtaining assistance.

As the head of the centre explained, the displaced persons were “treated” there, and then were given accommodation, likely in other parts of Ukraine, as the Dniepropetrovsk region is overburdened with refugees.

The Commissioner’s visit coincided with the arrival of the first cargo aircraft carrying EU humanitarian at Dnepropetrovsk airport. Many journalists and cameramen were taken to the tarmac, but the numerous military personnel present warned them against filming military helicopters and other sensitive infrastructure situated nearby.

The UN also reports of worrying developments in the Russia-occupied Crimea, in particular with regard to multiple violations of the rights of Crimean Tatars.

Last week, the premises of ATR, the only television channel broadcasting in the Crimean Tatar language, were reportedly raided by armed, masked men in unmarked military clothing, and the Deputy Head of the Crimean Tatar Mejlis, Mr. Ahtem Ciygoz, was detained. He faces up to 10 years in prison for creating “mass disturbances”.

More than 20,000 people have been internally displaced from Crimea to mainland Ukraine since the March “referendum”, which followed the takeover of the peninsula by so-called self-defence forces almost a year ago. Subsequently Russian law and citizenship were introduced in Crimea.

The Human Rights Mission in Ukraine will issue its next report on the situation in the country, including Crimea, at the beginning of March.

UN Deputy Secretary-General Jan Eliasson, who spoke to Brussels journalists on 3 February, said the UN was observing the situation in Ukraine “by the hour”.

“It’s a very serious situation due to the level of fighting right now. We have tried to play a role in terms of continued good offices. Secretary-General Ban Ki-moon has been frequently during this half year or so been in content with President Putin and President Poroshenko”, Eliasson said.

The UN Deputy Secretary-General said that the world organisation was “hoping very much” that there would be “a situation of restraint”.

“We are at a very dangerous moment in this crisis”, Eliasson said, calling the intensified fighting “very troublesome, very worrying”.

“We need to exercise restraint at this moment. We have a situation of fighting going on. This could get worse.  But we hope there will be efforts made to build channels for political contacts at the highest level and avoid that the escalation becomes even more serious”, Eliasson said.