In the Netherlands, Saakashvili vows to ‘continue fight’ 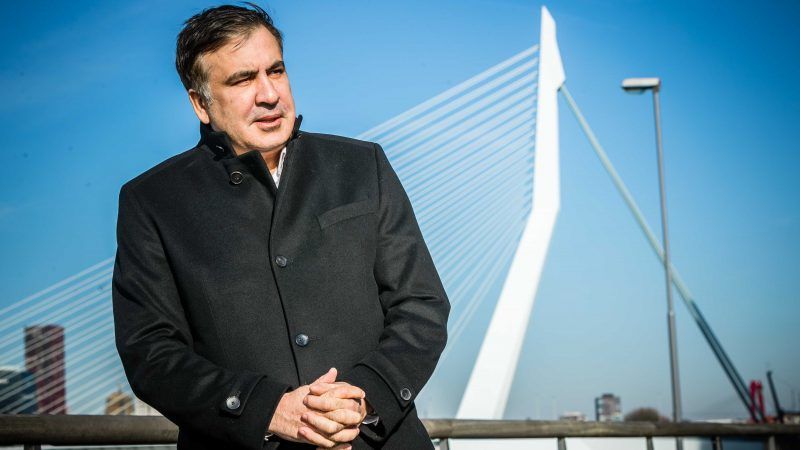 Former Georgian President Mikheil Saakashvili is posing in front of the Erasmus Bridge in Rotterdam, The Netherlands, 14 February 2018. [{Rob Engelaar/EPA/EFE]

Former Georgian president Mikheil Saakashvili vowed yesterday (14 February) to press on with his fight, as the stateless politician arrived in the Netherlands to join his family after being expelled from Ukraine.

Saakashvili, who is married to a Dutch woman, told AFP “we are going to continue the fight,” once again denouncing what he called Monday’s “brutal kidnapping” by Ukrainian authorities.

In the latest chapter of a high-profile, months-long saga, the opposition leader was arrested by masked men in a Kyiv restaurant and swiftly deported to Poland.

He has already been successively stripped of both his Georgian and Ukrainian nationalities, rendering him stateless.

On Wednesday, he spoke briefly to AFP outside the offices of the immigration authorities in Rotterdam, where his lawyer said he was sorting out his residency permit.

“Right now I am here, and I will be here for the time being,” Saakashvili, 50, said asked if he was planning to stay in the Netherlands.

‘A million on the streets’

At a press conference in Warsaw on Tuesday, Saakashvili said he had been blindfolded and rushed first by van, then by helicopter to Kyiv international airport.

One minute Mikheil Saakashvili was having lunch in a Kiev restaurant. The next minute men were scuffling on the floor as security forces detained him and kicked him out of the country. https://t.co/x62DQmu2Wm

“I want to stay a Ukrainian politician and fight the corruption. When we have one million (people) in Kyiv in the streets, we will go peacefully to Ukraine,” Saakashvili told reporters.

He added he was counting on help from supporters to return to Ukraine “to fight corruption”.

A former governor of Ukraine’s Odessa region, Saakashvili was once an ally of Ukrainian President Petro Poroshenko, but became one of his greatest foes.

The ugly falling out saw Saakashvili stripped of his Ukrainian passport.

But authorities in the Netherlands said in December that he can apply for a Dutch passport because of his marriage to Dutch citizen, Sandra Roelofs. The couple also has two sons.

In September, Saakashvili defied the Ukrainian authorities and forced his way back into the conflict-riven country across the border from Poland with the help of supporters. 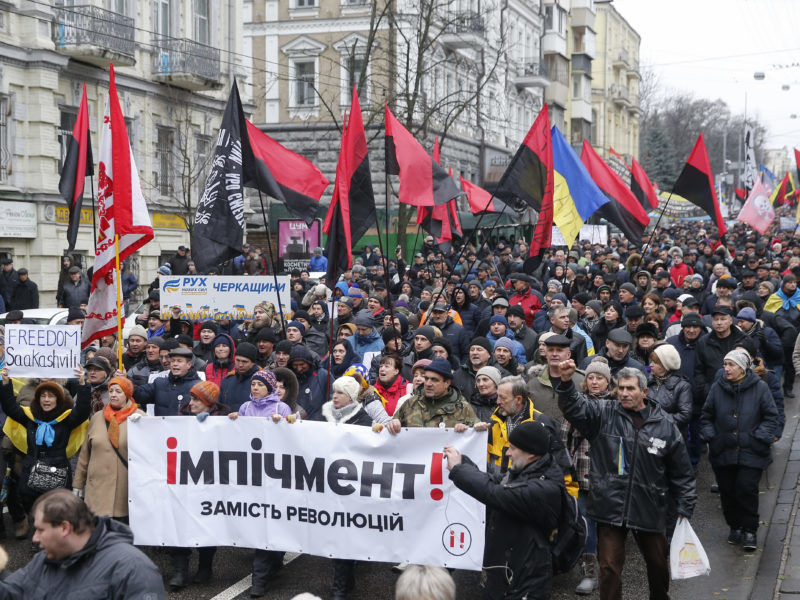 Several thousand people marched through central Kyiv on Sunday (10 December) to protest against the detention of Ukrainian opposition figure Mikheil Saakashvili and call for the impeachment of President Petro Poroshenko.

His party, the Movement of New Forces, has held rallies calling for Poroshenko’s ouster and accused the Ukrainian leader of failing to fight corruption.

But it is supported by less than two percent of the population, according to a recent poll.

The brutality of the arrest which saw Ukrainian border guards push Saakashvili to the ground, insulting and pulling him by the hair, according to footage posted online, has however triggered strong criticism.

The arrest could have a “negative impact” on Poroshenko’s image abroad, said Sergiy Solodkyi, deputy director of the Kyiv-based New Europe think-tank.

The European Commission has already vowed to continue “to follow developments regarding Saakashvili.”

“We expect the rule of law as well as the rights of Saakashvili to be upheld,” Commission spokeswoman Maja Kocijancic said.

He is also wanted by authorities in Georgia on charges of abuse in office — which he also strenuously denies.

Saakashvili said in Warsaw he wanted to visit the Netherlands next “to see my sons,” who like his wife are Dutch citizens.

He then plans to “go on a tour of Europe” to gain political support for his cause.

His lawyer Oscar Hammerstein told AFP Saakashvili “did not know that the Netherlands and Rotterdam are so pretty.”