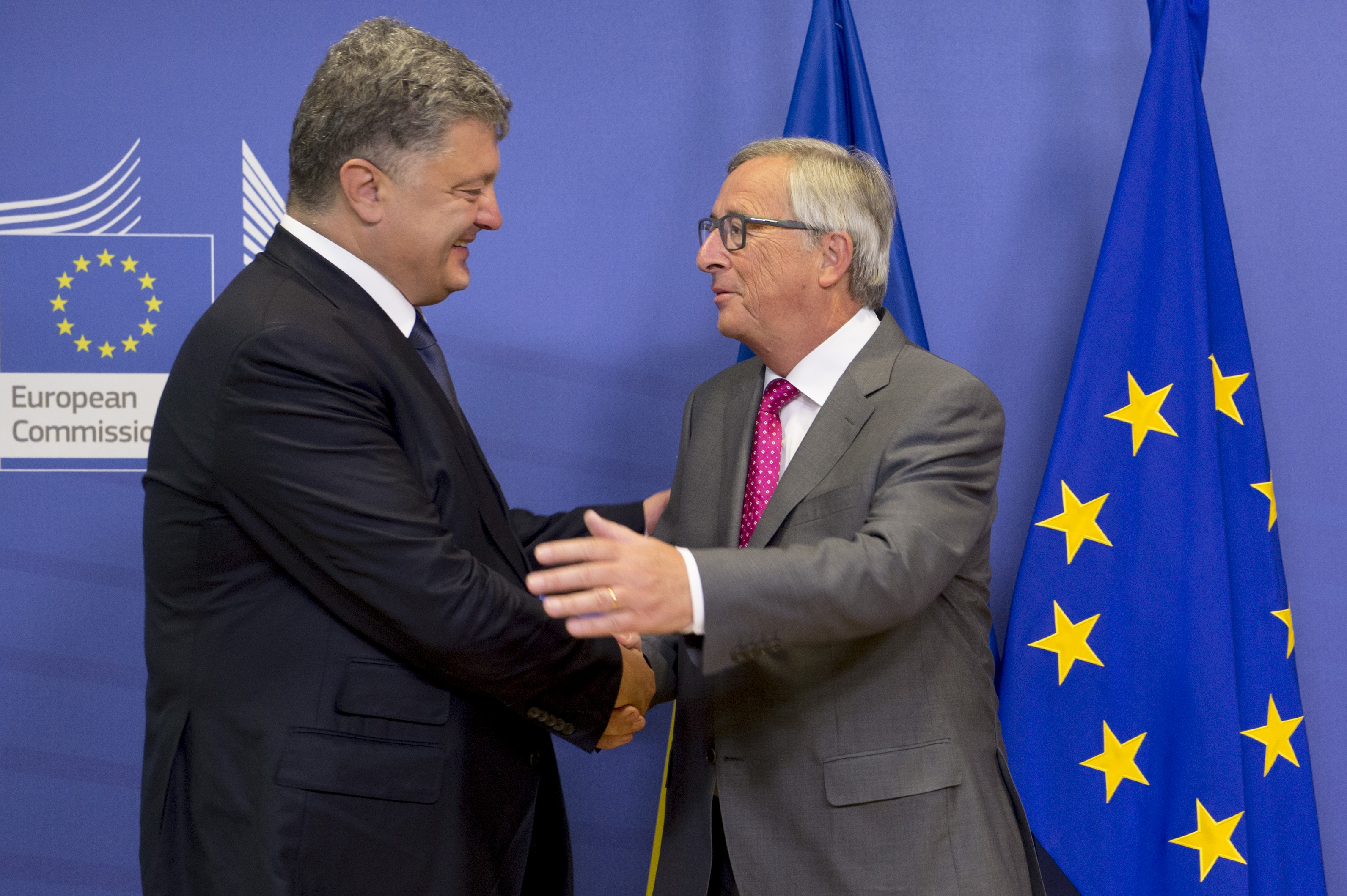 Poroshenko came to Brussels on the same day as his country reached a major deal with international creditors to ease repayments on its $18 billion debt, writing off $3.8 billion, and winning breathing space for an economy drained by the cost of fighting with pro-Russian separatists.

The main issues discussed in Brussels appears to be the implementation of the Minsk agreement (see background), the entry into force of the Deep and Comprehensive Free Trade Agreement (DCFTA) and the possibility of lifting the visa requirement for Ukrainian citizens.

Juncker said his wish was that “both countries” deliver on the Minsk agreement, adding that he refers especially to Russia, because Moscow doesn’t seem to abide by its commitments.

Poroshenko said he had informed Juncker of Ukraine’s efforts in delivering on the Minsk agreement. He said that the Ukrainian side has been withdrawing heavy arms, has been working on the political process, and that the necessary changes to the constitution would be before Parliament on 31 August, adding that he hoped that MPs would support his proposal.

Poroshenko thanked Juncker for the support his country has been receiving on the issue of constitutional reform, stating that the opinions of Commission experts were “very valuable”.

The Ukrainian president put the blame on Russia, who he said “does nothing to implement the Minsk agreements”. Just in the last 24 hours, Ukraine lost 7 soldiers, he added.

Poroshenko said that he had discussed the “so-called elections in Donbass”, which the pro-Russian rebels plan to organise on 18 October, and in the beginning of November. He made it plain that Ukraine does not want these elections to go forward. Ukraine considers them illegal, as they will be held without any security for voters, while constant artillery fire continues, without foreign observers, Poroshenko explained.

“These elections are not acceptable. Why? Because they don’t meet the international standards,” he said, speaking in English.

The Minsk agreement foresees that on the first day after the withdrawal, both sides would start dialogue on ways of conducting local elections, as well as on the future administration of these areas based on this law. It also foresees carrying out constitutional reforms in Ukraine, with a new constitution entering into force by the end of 2015 providing for decentralization as a key element, including a reference to the specificities of certain areas in the Donetsk and Luhansk regions, agreed on with the representatives of these areas.

On 1 July, Poroshenko proposed constitutional changes designed to give new powers to the regions of Donetsk and Lugansk. But Russia protested that these proposals didn’t take into account the opinion of the rebels who actually rule the regions.

‘No alternative to Minsk’

Poroshenko said there was no alternative to the Minsk process, rejecting views that the format of negotiations, or that the agreement itself, should be changed. He said that his meeting with Juncker, as well as the trilateral meeting in Berlin on Monday (24 August) with German Chancellor Angela Merkel and French President Francois Hollande were aimed at “keeping our unity” to “put pressure on Russia to deliver on the agreement”.

“There will be no ‘Minsk 3’. There is a range of issues that have been agreed. They need to be implemented,” Poroshenko said.

The Ukrainian president reiterated his country’s idea of introducing blue helmets, or an EU mission in the CSDP format.

Asked about a recent initiative of the Minsk contact group for a ceasefire from 1 September, Poroshenko asked: “Why should we wait one week?”

The Ukrainian president said it was an obligation of the Russian side to stop fighting from 00 hours on 15 February. “We made a ceasefire half a year ago. If you open the diagram by OSCE showing who violates the ceasefire, it shows clearly that this is Russia,” he stated.

Juncker said that of the EU 28 members, only two countries haven’t ratified the EU-Ukraine Association Agreement: Cyprus and Greece, two traditionally pro-Russian countries. “We wish the process to be completed,” he urged.

DCFTA is a must, said Juncker. He added that the Commission had always been very clear. “We would like the agreement to start being implemented in a provisional way from 1 January 2016, no matter what manoeuvres are being made to postpone this,” he said.

A Joint Declaration signed simultaneously with the Minsk Agreement foresees trilateral talks between the EU, Ukraine and Russia in order to achieve practical solutions to concerns raised by Russia with regards to the implementation of the EU-Ukraine DCFTA.

Regarding visas, Juncker said he had given a to-do list of 10 points to Poroshenko during the last EU-Ukraine summit, held last April in Kyiv. “I am happy to realise that huge progress has taken place,” he added.

Juncker said that on 17 August, Ukraine had given its positions, that it was now been discussed, and that the Commission’s intention was to propose, before the end of the year, the lifting of visa requirements.

If Ukraine will have fulfilled all the requirements, the executive will give a positive assessment, and in such case “I don’t doubt a single second” that member states will not approve the visa free agreement, Juncker said.

Asked if the ongoing migration crisis in the EU allowed such a move, Juncker was categorical that this had no link with the Ukraine visa issue.

Poroshenko thanked Juncker on the visa issue. An EU mission will arrive shortly in the Ukraine, and will take stock of the progress, he said.

“Ukraine hasn’t created any problem to any EU country regarding migration,” Poroshenko said.

However, the European Asylum Support Office (EASO) reports a spike in asylum seekers from Ukraine, which started in March 2014, at the time of the Crimea invasion, and has continued growing.

Council President Donald Tusk, who met with Poroshenko just after Juncker, said that during their talks the issues discussed were as follows:

“First, President Poroshenko briefed me on the recent increases in violations of the Minsk ceasefire. I am especially worried about the targeting of the OSCE Special Monitoring Mission and call on all parties to make sure this does not happen again. Thank you for your information, Petro. After our meeting I am absolutely sure about your determination to help the Special Monitoring Mission in their duty. We are rapidly approaching the deadline for the complete implementation of Minsk, so it is critical that everyone does their utmost to make it succeed. I hope that the new ceasefire agreed yesterday is a first step.

“Second, we talked about the domestic situation in Ukraine, including the economic outlook, upcoming local elections and constitutional reforms. I welcome progress on amending the constitution to allow for greater decentralisation and encourage Ukraine to move more quickly on judicial reform.

“Third, we discussed how Ukraine is implementing the Association Agreement, in particular those parts on visa liberalisation. We want to see free travel between Ukraine and Europe sooner rather than later. That is why I encouraged President Poroshenko to move quickly on this issue. As you know, we are here in Brussels, both Jean-Claude Juncker and me, very engaged and supportive for this project. I am really satisfied when it comes to progress on your side.

'I would also like to touch upon one more issue. Two days ago Oleg Sentsov was sentenced to twenty years in a labour camp in Russia. Sentsov protested against the annexation of Crimea, where he lived with his two children. Sentsov, Kolchenko, Savchenko and all other Ukrainians held illegally in Russia as well as EU citizens such as Eston Kohver are blatant acts of injustice. They are also symbolic of the cynicism that dominates Russian politics. As long as Oleg Sentsov and others stay in prison, all honest and decent people will not remain indifferent to their fate.”

On the occasion of the visit of Poroshenko to Brussels, the Bertelsmann Stiftung issued a press release reminding that a joint paper of the Vienna Institute for International Economic Studies and the Bertelsmann Stiftung makes recommendations on How to stabilise the economy of Ukraine (link to study). A recent survey done in cooperation with the Warsaw-based Institute of Public Affairs in Germany, Poland and Russia highlights what people in these countries think about the conflict, the sanctions imposed by the EU and Russia alike as well as consequences for relations with Ukraine, on the one hand, and Russia, on the other: Close together or far apart?.