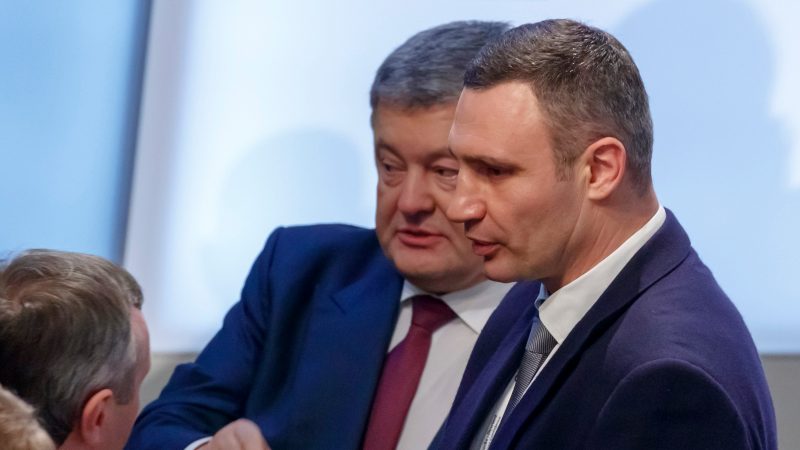 Kyiv mayor Vitali Klitschko said on Tuesday (18 May) that Ukrainian state security agents had come to his apartment in what he denounced as an attempt by his rival, President Volodymyr Zelenskiy, to put pressure on him.

The SBU state security agency denied having taken action against the mayor.

Rivalry between the two began soon after Zelenskiy unexpectedly won Ukraine’s presidency in 2019, beating the then-incumbet Petro Poroshenko, a former political ally of the mayor of Kyiv, Ukraine’s capital.

Klitschko, a former world boxing champion, told reporters SBU officers tried to enter his apartment early on Monday when he was out for training, and that a camera recorded them going up the stairs, ringing and knocking on his door.

Klitschko said that when he arrived back, he was told the SBU was carrying out an investigation against other residents of the same building.

He expressed disbelief and denounced the situation as a sign of political pressure by Ukraine’s central authorities against his municipal government.

The SBU, the state prosecutor’s office and police carried out large-scale searches earlier this month of various units of the Kyiv city government, accusing the local authorities of misappropriation of budget funds and tax evasion, among others.

“Error? I don’t think so. Unprecedented pressure on the city authorities continues,” the mayor’s press office quoted him on Tuesday as saying.

“In orchestrating slanderous attacks against Kyiv city government, the office of the president (Zelenskiy) is trying to establish control over the capital,” he said late on Monday.

There has been no comment from Zelenskiy, while the SBU said in a statement on Tuesday: “The SBU…conducts searches within criminal proceedings on falsified oil products. They take place in several locations at once, including in the house where Mr. Klitschko lives. The searches have nothing to do with Mr. Klitschko himself,” it said.

Klitschko comfortably won a second term at the helm of Kyiv last October, while a candidate backed by Zelenskiy placed fifth.

Corruption and bitter political infighting are both prevalent in Ukraine, a former Soviet republic that saw Moscow annex its Black Sea peninsula of Crimea in 2014 as the country pushed for deeper integration with the West.

The Kremlin then went on to back separatists fighting Kyiv troops in Ukraine’s industrial east, a conflict that killed more than 14,000 people to date and has not been resolved.

The West has sanctions against Russia in place over the turmoil in Ukraine and supports the country in its stand-off with Moscow, but it is also exasperated with the slow pace of anti-graft and other reforms, often held hostage by vitriolic politics.