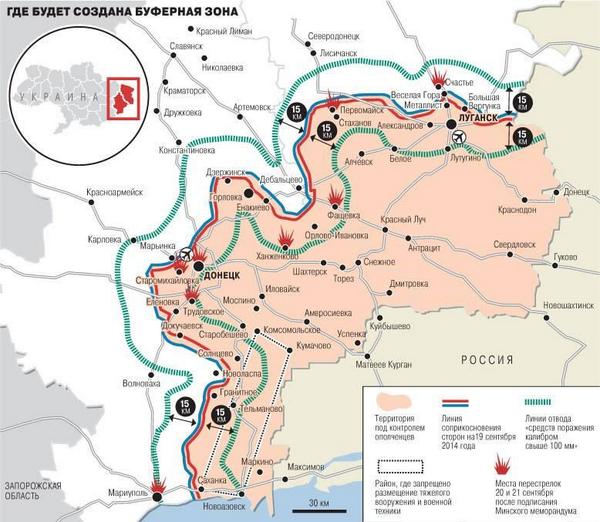 In green, the 30-km buffer zone stretching from Lugansk (North) to Mariupol (south)

The president was forced to end an offensive against the separatists and call a ceasefire on 5 September after big battlefield losses that Kyiv ascribed to the direct intervention of Russian troops, something Moscow denied despite what Kyiv and the West says is undeniable proof.

Though Ukrainian soldiers continue to die in spite of the ceasefire – two more were killed in the past 24 hours, Lysenko said – Poroshenko defended his peace plan, saying Ukrainian deaths had been significantly reduced.

Speaking after returning home from a meeting with US President Barack Obama in Washington, Poroshenko said he would have risked forfeiting Western goodwill by pressing ahead with a military offensive against Russian-supported separatists.

Despite telling the Congress that Ukraine needed more than “blankets” from the United States to win the war against the separatists, his failure to secure a US promise of weaponry from Obama may have convinced him of the need to move forward more rapidly with the peace process on the ground.

“It’s not possible to win […] purely by military means. The more Ukrainian army battalions or brigades are brought up, the more troops there are from the Russian Federation,” he acknowledged on Sunday night.

He added that his priorities now were to get all Russian troops out of the country. “We’ll monitor this. We’ll say when the last Russian soldier has left,” he said. The border with Russia had to be closed.

The Ukrainian military’s announcement that it is complying with an agreement reached in the Belarussian capital Minsk last Friday for creation of a 30 km buffer zone will strengthen Ukraine at the UN general assembly on Thursday, where Prime Minister Arseny Yatseniuk will defend his country’s actions.

Military spokesman Lysenko, in rare favourable comments on the separatists and Russia, said that artillery attacks had diminished in the past 24 hours and that there had been no firing from Russian territory.

“A lessening of intensive shelling has been noted. No violations of the border have been tracked by our border guards. There was no firing from the territory of the Russian Federation. All this shows the practical realisation of all the points of the peace plan,” Lysenko told journalists.

“The Ukrainian military is setting an example of how this should be done,” he said.

Last Friday’s Minsk memorandum foresees the warring sides pulling back their artillery by 15 km on each side to create a 30 km buffer zone between their forces.

Military officials have not identified exactly where the buffer zone line will run. Much of the recent military action has been in the city of Donetsk, the region’s main industrial hub with a pre-conflict population of nearly one million.

Lysenko, replying to a question, said only: “It is the line where there are forces”.

Poroshenko’s deeper plan may be to calm the waters, albeit temporarily, ahead of a parliamentary election on 26 October when he hopes for a strong coalition to emerge in his favour.

His plan to grant limited self-rule for a three-year period to the independence-minded separatists has left him vulnerable to criticism at home that he gave in to Moscow and set the scene for creation of a “frozen conflict” within Ukraine.

The plan, which was bulldozed through parliament at a closed session, has also been met by derision by the rebels who say they do not want to be part of Ukraine.