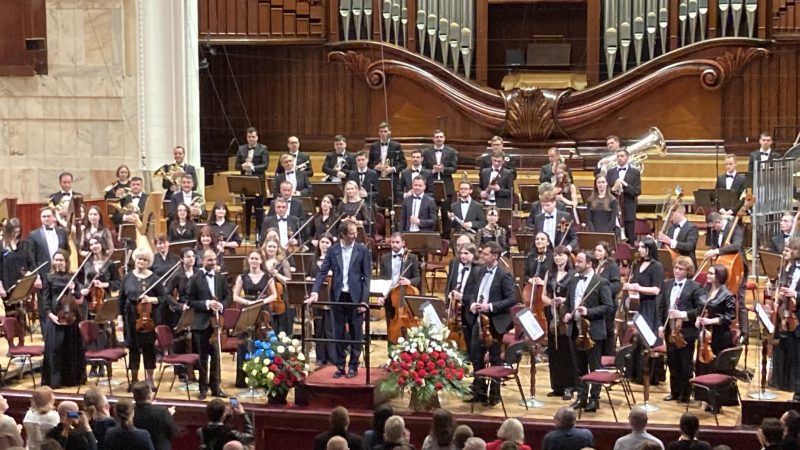 After Warsaw, the Kyiv Symphony will also perform in the Polish city of Lodz, several German cities, and possibly add more stops. [Twitter]

For Eleanora Tymoshenko, a music teacher from Balakliia, near Kharkhiv in Eastern Ukraine, and now a refugee in Warsaw, a night of Ukrainian music is food for her soul as she reflects on the conflict ravaging her home.

Tymoshenko was one of hundreds of spectators, including diplomats and dignitaries, at the concert on Thursday (21 April) to watch the Kyiv Symphony Orchestra kick off its tour around Europe.

For the last two weeks, the musicians and their families have been staying in Warsaw. They have been rehearsing and preparing for their tour, while taking refuge from the ongoing conflict in their country.

With a special dispensation from the Ukrainian government to allow its male musicians to leave Ukraine instead of serving in the military, the orchestra will also perform in the Polish city of Lodz, several German cities, and possibly add more stops.

For these musicians, playing Ukrainian pieces by composers like Maksym Berezovsky and Borys Lyatoshynsky to foreign audiences marks a different kind of battle against Russia.

Went to a moving performance tonight of the Kyiv Symphony Orchestra at the National Philharmonic in Warsaw. They played pieces from Ukrainian composers including Berezovsky, Skoryk & Lyatoshynsky 1/ pic.twitter.com/mcg9VARAh4

On top of rehearsal space, the musicians and their families have received housing, food and psychological support from the Warsaw Philharmonic, the National Institute of Music and Dance and the Polish government.

Katarzyna Meissner, head of the National Institute of Music and Dance, said Polish solidarity with Ukraine was fuelled by a mutual understanding of needing to promote one’s culture.

“Ukrainian culture is so very rich and yet so very undiscovered. For Poland it’s sometimes quite similar, looking to the West,” she said.

Polish musicians working with the orchestra added that the concert, Poland’s support for their Ukrainian counterparts and the tour were all part of a larger political message.

“I think in the context of what (Russian President Vladimir) Putin says, that Ukrainians don’t deserve to be a nation, I think this is an artistic protest, a manifest that he is gravely mistaken,” Polish solo violinist Janusz Wawrowski said.

The orchestra’s PR director, Liza Sirenko, said she hoped this “cultural front” of the war will also help Ukraine get more weapons from its Western allies as the tour proceeds to Germany.

“Somehow, like a fairy tale, after our concert, (some German politicians) will decide to give us more military help,” Sirenko said.

Great music by #Kyiv Symphony Orchestra in #Warsaw starting a series of concerts in #Poland and #Germany. UA Ambassador Deshtshytia calls for music and arms for Ukraine #ArmUkraineNow pic.twitter.com/JFUS1ts8JS