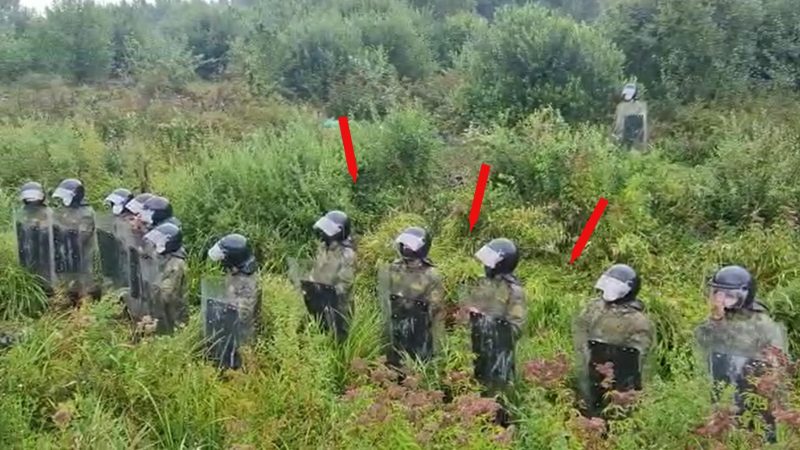 A dozen Belarusian officers in riot gear illegally crossed into Lithuanian territory on Tuesday (17 August) while pushing a group of Iraqi migrants over the border, Lithuania’s border guard service said. EU home affairs ministers meet in Brussels later on Wednesday to discuss a response to the border violation.

Over the past weeks, Lithuania, and subsequently Brussels, have repeatedly accused Belarus’ strongman Alexander Lukashenko of using the refugee crisis to pressure the bloc to reverse sanctions it imposed on Minsk over a disputed presidential election last August and its treatment of the political opposition.

This would, amongst others, include deliberately flying in Iraqi migrants to Minsk and then ferrying them over the border to claim asylum in Lithuania.

A video of Tuesday’s incident near Dieveniskes village, released by Vilnius and forwarded to reporters, shows a group of migrants coming through high grass towards Lithuanian border guards, with Belarusian officers in riot gear standing in a line behind them.

“The officers left the territory after several minutes, after being told repeatedly by Lithuanian border guards they had violated the border,” said border guard service spokesperson Rokas Pukinskas.

However, this seems not to have been the first incident of the kind on the Lithuanian-Belarusian border over the recent days.

According to the border guard service, another incident has occurred last week on late Thursday evening in the Šalčininkai district, where officers had captured a Belarusian border guard with stationary video surveillance equipment, which entered the territory of Lithuania about one and a half metres and immediately returned.

“We have immediately responded to the provocation and have made a decision to further increase the border protection capacity,” said Lithuania’s interior minister Agnė Bilotaitė said in a separate statement on Tuesday, adding that her country “cannot tolerate this bold provocation”.

The information on the violation of the state border will be used in a pre-trial investigation conducted by Lithuania, she added.

Only last week, the country’s parliament had voted to build a fence on the Belarus border to stop Iraqis, Afghans and other non-EU migrants from entering.

Lithuania says a total of 4,124 people have crossed into its territory illegally so far this year, mostly in July, though only 14 entered between 5 and 16 August, as Lithuania began pushing back the migrants entering from Belarus.

Belarus’s border committee earlier released a video of the incident filmed from its side of the border, which does not show the officers in riot gear.

“The Lithuanian security forces use physical force to try to push the refugees into the territory of the Republic of Belarus,” it stated.

The incident comes as EU interior ministers are slated for an extraordinary call on Wednesday to discuss further action on the migration issue.

In its invitation letter to ministers, Slovenia’s interior minister Aleš Hojs wrote to his counterparts that the “aim of the meeting is not only to raise awareness” but particularly also to “follow up with concerted actions”.

“What we see in Lithuania is not only increased migratory threat, but a serious security threat and state-sponsored weaponisation of illegal migration,” he wrote, but added that “further actions are needed at the European level”.

One such major initiative, the European Commission’s recently proposed long-awaited migration pact has been stuck with member states since its presentation in September 2020.

With Afghanistan having fallen into the hands of the Taliban following the withdrawal of most US and international forces, EU leaders are increasingly concerned that thousands of migrants from the region will make their way towards Europe.

According to a draft statement, EU home affairs ministers are set to announce that the EU stands ready to provide additional border officers and money to tackle a migrant surge on Lithuania’s border blamed on Belarus.

They will also condemn Belarus for committing unacceptable aggression by sending migrants to Lithuania’s border, the draft statement seen by Reuters, said.

The UK, US and Canada last week simultaneously imposed a fresh wave of sanctions on Belarus to hurt Lukashenko’s regime on the occasion of the one-year anniversary of an election that Western countries consider to have been rigged.

According to EU diplomats in Brussels, the idea of additional sanctions remains on the table, but the prevailing notion is to first assess the impact of the previous rounds of punitive measures imposed on Minsk.

The main purpose of the EU’s targeted sanctions is to discourage Western companies from doing business with Belarus, in particular persons and entities related to Lukashenko’s regime.

Speaking to EURACTIV last month, Lithuania’s foreign minister Gabrielius Landsbergis had suggested official entities, such as airlines and tourist agencies, are involved in organised human trafficking via Belarus to face sanctions from the EU side, too.

However, so far this has not been part of the minister’s official deliberations.