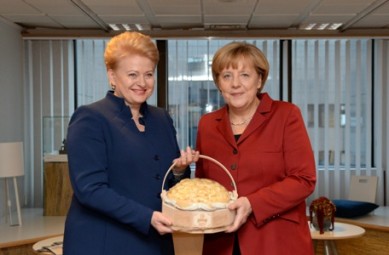 Russian Prime Minister Dmitry Medvedev failed to answer telephone requests to discuss the issue with his Lithuanian counterpart for three weeks, she added.

The Kremlin's consumer protection agency Rospotrebnadzor originally cited quality concerns as the reason for the suspension, just weeks before Lithuania hosts a key summit in Vilnius to promote closer trade ties between the EU and Ukraine and other ex-Soviet states who are not members of the 28-country bloc (see background).

Russia's move further turned up the heat on Lithuania ahead of the summit, which Moscow sees as a threat to its influence in the region.

The Lithuanian president said that if the ban was not rescinded, the Baltic state would ask Brussels to commence proceedings at the WTO in Geneva.

The ban is estimated by the European affairs committee in the Lithuanian parliament – the Seimas – to result in up to €3 million in lost revenue each day to the Baltic state.

Grybauskait? also referred to personal attacks made against her in recent days by Russian media sources as “information attacks”.

“The Russian speaking media has placed stories suggesting that since I studied in St Petersburg so long I was up to something different there,” said Grybauskait?, referring to a Russian media report published last Sunday.

The report – which was picked up in the Lithuanian media this week – suggested that the Lithuanian president served in the KGB during her time at Leningrad State University, from where she graduated in 1983 and subsequently taught.

A government source told EURACTIV that all senior Lithuanian government ministers were warned last week by the country’s security services to expect Kremlin–led smear campaigns to be directed against them.

Propaganda campaign under way in Ukraine

One senior source told EURACTIV that Moscow had sanctioned a €300 million propaganda campaign against the EPA in Ukraine, and that television advertisements and advertising billboards are extolling the rival Russian-led customs union agreement.

Another well-placed government source said that rumours were circulating in Vilnius that Russia was stockpiling gas in Kaliningrad – an enclave which relies on Lithuanian transportation for its supplies of fuel and goods.

“A power plant in Kaliningrad has not been producing for two weeks, giving rise to fears that the gas imports are being stockpiled rather than used,” said a senior government source.

“We know the Russians are building additional underground storage facilities for gas in Kalinigrad, the question is, is this for supply purposes?” Petras Auštrevi?ius, the deputy speaker in the Seimas, told EURACTIV yesterday.

Russian customs authorities recently blocked transport trucks at the border with Lithuania for up to 20 days at a time, causing heavy losses for its freight industry.

In addition, between August and mid-September this year, a customs slowdown was imposed on Lithuanian traffic entering and leaving the small Russian Baltic enclave of Kaliningrad. Authorities let no more than two cars with Lithuanian number plates enter or leave within an hour, a senior diplomatic source in Vilnius told EURACTIV.

As the Vilnius summit approaches, Russia has banned the imports of wine from Moldova and chocolate from Ukraine, citing safety concerns, in what appears to be a strategy to escalate pressure on countries wishing to build closer ties with the European Union.

Russia also told Moldova that it had to choose between cheap gas and EU integration.

The European Parliament recently adopted a resolution calling on the European Commission to consider Russia’s pressure on neighbours beyond just trade, saying it was “merely a cover for blatant political pressure”.

Lithuania, which currently holds the EU's rotating presidency, is preparing to host a key summit on on 28-29 November countries of the so-called "Eastern partnership", the EU's rapprochement initiative with Ukraine, Moldova, Belarus, Georgia, Armenia and Azerbaijan.

Depending on its progress on a number of outstanding issues, Ukraine is expected to sign an EU association agreement at the summit, containing a Deep and Comprehensive Free Trade Agreement (DCFTA). Meanwhile, Moldova and Georgia are expected to initial similar documents at the meeting.

Russia appears to be getting nervous as 28-29 November Eastern partnership summit in Vilnius approaches, ratcheting up pressure on countries seeking closer ties with the European Union.

Reportedly, Armenia has already agreed under Russian pressure to join the Customs Union.