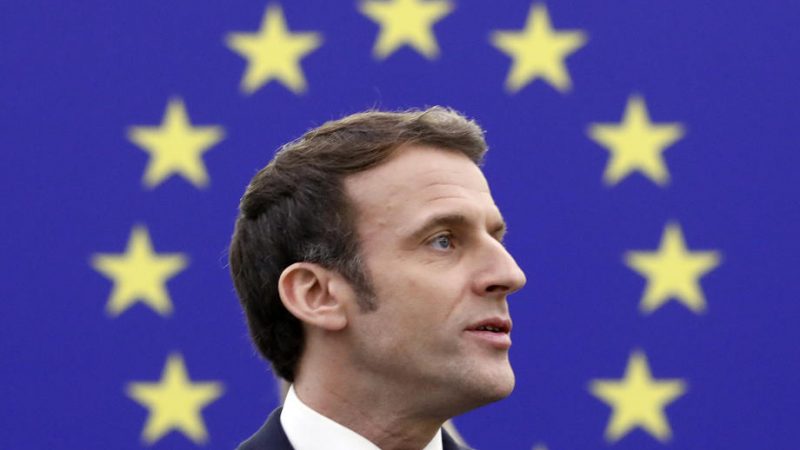 The European Union must hold a “frank dialogue” with Russia and seek a political solution to the tensions over Ukraine, French President Emmanuel Macron told the European Parliament on Wednesday (19 January).

The 44-year-old leader, who is set to seek re-election in April, addressed lawmakers at the European Parliament to lay out his priorities for France’s turn holding the six-month rotating presidency of the 27-member bloc.

The agenda intends to “create together a European power of the future… an independent Europe that has given itself the means to decide its own future and not rely on the decisions of other major powers,” he said.

Over his four and a half years in power, Macron has consistently argued for what he calls European “strategic autonomy”, seeking to match the continent’s undisputed economic weight with diplomatic and military strength.

Many experts see the vision as far-fetched because of policy divisions between member states and their unwillingness or inability to pool their defence resources.

Macron argued that Europeans needed to build their own “collective security framework” and re-arm themselves, implying that the continent needed to work outside of the US-led NATO alliance that guarantees security for most EU states.

“Security on our continent requires strategic rearmament,” he added, saying that “frank and demanding” talks with Russia were also needed.

“As Europeans, we need to collectively make our own demands and put ourselves in a position to enforce them,” he said.

The European Union was not involved in direct talks with Moscow during a week of diplomacy last week to try to ease tensions caused by Russia’s decision to mass tens of thousands of troops on its border with Ukraine.

Speaking amid growing worries over a Russian military build-up at Ukraine’s borders, Macron said that France, together with Germany, wants to continue seeking a political response to the tensions over Ukraine in the so-called Normandy format, which brings together Ukraine, Russia, Germany and France.

Macron said he “regretted” that proposals earlier this year from him and former German Chancelor Angela Merkel for the EU to hold direct talks with Russia had been refused by other EU member states.

Macron said a new “security framework” needed to be put forward “in the next few weeks” during France’s presidency of the European Council.

“We need to build it between us, Europeans, share it with our allies in NATO, and propose it for negotiation to Russia,” he told lawmakers.

At the heart of the framework would be principles agreed with Russia 30 years ago, he said.

These included rejecting the use of force or coercion, giving states “choices to accede to alliances or bodies that they wish to,” the “inviolability of borders” and the “rejection of spheres of influence.”

“We in Europe need to stand up for these inherent rights,” Macron said.

Earlier US Secretary of State Antony Blinken, who arrived in Kyiv for talks, warned that Russia could launch a new attack at “very short notice”.

Separately, Macron said the EU must review its relationships with the Western Balkans and offer them sincere prospects of joining the bloc.

Macron has not previously been enthusiastic about welcoming new members into the bloc, especially those from the Western Balkans. Furthermore, with presidential elections looming, he is unlikely to want to rock the boat in a country where only 30% of the population support enlargement.

While the Commission and most EU members say Albania and North Macedonia have fulfilled the conditions to start accession negotiations, the process is stalled due to a veto of the latter by Bulgaria, which seems unlikely to shift any time soon.