Mariupol defenders surrender to Russia but their fate is uncertain 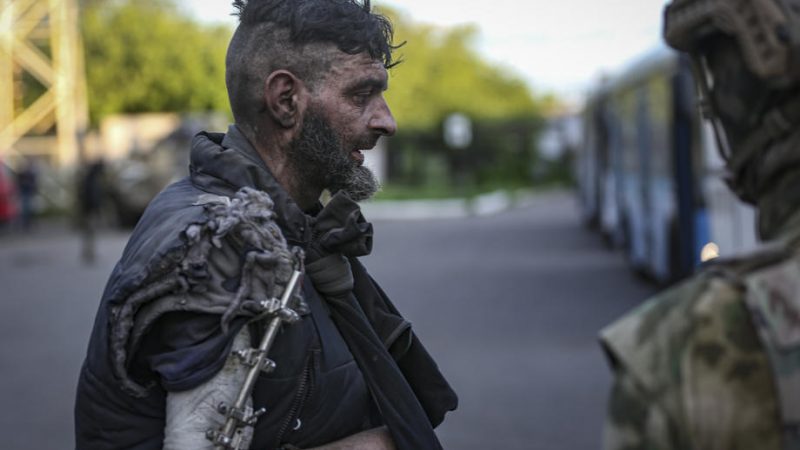 epa09953883 Self-proclaimed DPR militia (R) watches an Ukrainian serviceman boarding a bus as he is being evacuated from the besieged Azovstal steel plant in Mariupol, Ukraine, 17 May 2022. A total of 265 Ukrainian militants, including 51 seriously wounded, have laid down arms and surrendered to Russian forces, the Russian Ministry of Defence said on 17 May 2022. EPA-EFE/ALESSANDRO GUERRA

More than 250 Ukrainian fighters surrendered to Russian forces at the Azovstal steelworks in Mariupol after weeks of desperate resistance, bringing an end to the most devastating siege of Russia’s war in Ukraine and allowing President Vladimir Putin to claim a rare victory in his faltering campaign.

Even as the Kremlin prepares to take full control of the ruins of Mariupol, it faces the growing prospect of defeat in its bid to conquer all of Ukraine’s eastern Donbas because its badly mauled forces lack the manpower for significant advances, some analysts of the Russian campaign said.

Buses left the steelworks late on Monday in a convoy escorted by Russian armoured vehicles. Five arrived in the Russian-held town of Novoazovsk, where Moscow said wounded fighters would be treated.

Seven buses carrying Ukrainian fighters from the Azovstal garrison arrived at a newly reopened prison in the Russian-controlled town of Olenivka near Donetsk, a Reuters witness said.

There were some women aboard at least one of the buses in Olenivka, Reuters video showed. Some of the women wore olive-green uniforms, as did most of the men. All of them appeared exhausted. One rested against duffel bags stacked on the floor.

What will happen to the fighters was unclear. The Kremlin said Putin had personally guaranteed the prisoners would be treated according to international standards, and Ukrainian officials said they could be exchanged for Russian captives.

TASS news agency said a Russian committee planned to question the soldiers, many of them members of the Azov Battalion, as part of an investigation into what Moscow calls “Ukrainian regime crimes”.

The denouement of a battle which came to symbolise Ukrainian resistance gives Moscow total control of the Azov Sea coast and an unbroken stretch of eastern and southern Ukraine, even as its troops retreat from the outskirts of Kharkiv in the northeast.

On Tuesday, officials from both sides said that peace talks aimed at ending the war had stagnated. Negotiators last convened in-person in late March, and there has been little communication between them in recent weeks.

Russia’s Deputy Foreign Minister Andrey Rudenko said Ukraine “has practically withdrawn from the negotiation process,” While Russian negotiator Leonid Slutsky said talks were not being conducted in any format.

Ukrainian presidential adviser Mykhailo Podolyak said talks were “on hold” as Russia is not willing to accept that it will not achieve its goals.

The complete capture of Mariupol is Russia’s most significant victory since it launched what it calls a “special military operation” on Feb. 24. But the port lies in ruins, and Ukraine believes tens of thousands of people were killed under months of Russian bombardment.

Russia said at least 256 Ukrainian fighters had “laid down their arms and surrendered”, including 51 severely wounded. Ukraine said 264 soldiers, including 53 wounded, had left.

Russian defence ministry video showed fighters leaving the plant, some carried on stretchers, others with hands up to be searched by Russian troops.

While both sides spoke of a deal under which all Ukrainian troops would abandon the steelworks, many details were not yet public, including how many fighters still remained inside, and whether any form of prisoner swap had been agreed.

Ukraine’s Deputy Defence Minister Hanna Malyar told a briefing that Kyiv would not disclose how many fighters remained inside until all were safe. Ukraine’s military said units in Azovstal had completed their combat mission.

Ukraine’s Deputy Prime Minister Iryna Vereshchuk said Kyiv aimed to arrange a prisoner swap for the wounded once their condition stabilises, but neither side disclosed terms for any specific deal.

High-profile Russian lawmakers spoke out against any prisoner swap. Vyacheslav Volodin, speaker of the State Duma, Russia’s lower house, said: “Nazi criminals should not be exchanged.”

Lawmaker Leonid Slutsky, one of Russia’s negotiators in talks with Ukraine, called the evacuated combatants “animals in human form” and said they should be executed.

Natalia, wife of a sailor among those holed up in the plant, told Reuters she hoped “there will be an honest exchange”. But she was still worried: “What Russia is doing now is inhumane.”

The United Nations and Red Cross say the true death toll from the Mariupol siege is still uncounted but it is certain to be Europe’s worst since the 1990s wars in Chechnya and the Balkans.

Elsewhere, Ukrainian forces have been advancing at their fastest pace for more than a month, driving Russian forces out of the area around Kharkiv, Ukraine’s second largest city.

Ukraine says its forces had reached the Russian border, 40 km (25 miles) north of Kharkiv. They have also pushed at least as far as the Siverskiy Donets river 40 km to the east, where they could threaten supply lines to Russia’s main advance in the Donbas.

Russia is still pressing that advance despite taking heavy losses. Ukrainian President Volodymyr Zelenskiy said Russia had shelled the areas in the north and west on Tuesday to compensate for what he called Russia’s failures in the east and south.

“They cannot produce any successes for their combined forces in areas where they are trying to advance,” Zelenskiy said in a late night address. “These strikes, like many of those that came before them, will give them nothing.”

Putin may have to decide whether to send in more troops and hardware to replenish his dramatically weakened invasion force as an influx of modern Western weaponry bolsters Ukraine’s combat power, analysts said.