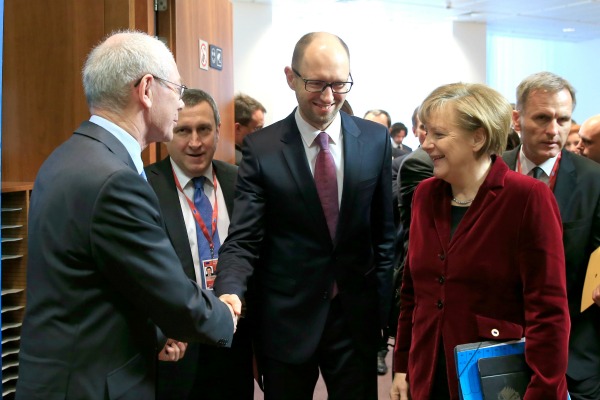 German Chancellor Angela Merkel has today (9 April) addressed the Bundestag, regretting the lack of effort by Russia to de-escalate the situation surrounding Ukraine, and calling on Moscow to sit at the same table with Kyiv. EURACTIV Germany reports.

“The illegal, human rights violation through the annexation of Crimea has brought something to light that we thought was forgotten”, said Angela Merkel at the general debate in the Bundestag on Wednesday.  “Namely: that we still have to speak about freedom, international law, peace and adherence to international human rights law,” she elaborated.

The situation in Ukraine remains difficult, said Merkel. “Unfortunately in many cases it is not recognisable how Russia is contributing to de-escalation of the situation.”

The Chancellor called on Moscow to sit down with the new Ukrainian government at the same table. It is important that international talks take place with participation of Ukraine, Merkel stated.

On Tuesday, Russian foreign Minister Sergei Lavrov said that Russia would sit on the same table with Ukraine only if the Russian-speaking population of the eastern and southern part of the country is also represented. The USA, Russia, Ukraine and the EU are expected to hold a meeting at ministerial level next week, but the date and the venue are still unknown.

Merkel also called for reinforcements for the observation mission of the Organisation for Security and Cooperation in Europe (OSCE) in Ukraine from 100 to 500 persons, as agreed.

The deployment of a special monitoring mission regarding the developments in Ukraine was unanimously decided by the 57-member organisation on March 21. More than 100 observers are expected to be sent to Ukraine for six months to monitor the situation in the country.

Meanwhile the German chancellor warned the government in Kyiv to expedite constitutional reform in the country and ensure fair preparation of the presidential elections scheduled for 25 May.

“It is important for the constitutional process in Ukraine to make progress. It is important that the elections there can be judiciously prepared,” she told MPs.

Referring to the international community and the EU, Merkel said they must ensure that promises of financial assistance for Ukraine are paid as soon as possible. She called the concluded IMF programme very ambitious and one “that will require the human sacrifice”.

On 27 March the IMF announced  $14-18 billion (€10 to €13 billion) in standby credit for Kiev, in return for tough economic reforms that will unlock further aid from the European Union, the United States and other lenders over two years.