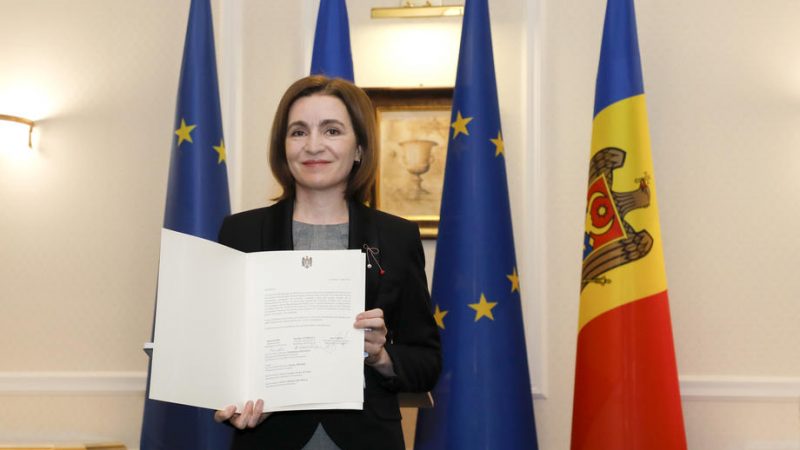 Moldova officially applied for fast-track EU membership on Thursday (3 March), joining Ukraine and Georgia, its partners from the so-called Associated Trio, a week after Russia’s invasion of Ukraine began.

Prompted by war in neighbouring Ukraine, Moldovan President Maia Sandu, the prime minister and the parliamentary speaker signed a formal application for her country to join the EU on Thursday.

“It took 30 years for Moldova to reach maturity, but today the country is ready to take responsibility for its own future,” said Sandu, before holding up the signed document to the television cameras.

“We want to live in peace, prosperity, be part of the free world. While some decisions take time, others must be made quickly and decisively, and taking advantage of the opportunities that come with a changing world,” she said.

The application will be sent to Brussels in the coming days, she said.

Ukraine’s President Volodymyr Zelenskiy earlier this week charted the way as Kyiv submitted an official request to allow his country to gain ‘immediate’ membership under a special fast-track procedure as it defends itself from a Russian invasion.

In 2014, Moldova signed an Association Agreement with the EU aimed at aligning it with the bloc’s political and economic standards, but it came without a guarantee of membership.

The country of 2.6 million people, one of Europe’s poorest, played host to EU’s chief Josep Borrell on Wednesday and Thursday and this weekend will welcome US Secretary of State Antony Blinken.

Borrell, speaking alongside Sandu on Wednesday, said there is a concern about the “instability at the border” that the conflict could generate.

“The security risks for Moldova are serious,” she said, stressing that from the capital Chisinau “you can hear the noise of the bombs across the border” where Russian forces conduct military operations in Ukraine next to its borders.

Pro-Russian and pro-EU forces have vied for control in the country’s capital Chisinau since Moldova won independence from the Soviet Union in 1991.

Chisinau’s long-standing demand for the troops to leave has been in vain.

According to some analysts, Russia’s strategy is to link the Moldovan territory of Transnistria which Moscow controls to the Ukrainian Black Sea territories it seeks to annex.

Foreign Minister Nicu Popescu said Thursday was “a day future generations will proudly relate to, it is the moment our country has irreversibly anchored itself in the European space”.

However, aspirants wanting to join the EU typically face a long and complex process that often requires major reforms to reach the bloc’s standards.

This also includes implementing sweeping reforms and providing proof that their finances are heading in a direction that will allow them to adopt the euro.

A summit between Georgia, Ukraine and Moldova in the Georgian Black Sea city of Batumi in 2021 culminated with the signature of a declaration calling for the EU to acknowledge the perspective of these countries to become full EU members one day.

The self-declared ‘Associated Trio’ doesn’t want to be held back by the other three members of the EaP, which they perceive as having different agendas: Armenia, Azerbaijan, and currently suspended Belarus.

EU leaders may discuss the broader implications of the three requests when they meet for an informal summit in Paris next week, diplomats said.