The new Prime Minister of Moldova Maia Sandu speaks during a briefing at the Parliament building in Chisinau, Moldova, 14 June 2019. [Dumitru Doru/EPA/EFE]

Moldova’s new prime minister Maia Sandu consolidated her power on Friday (14 June) as her predecessor resigned, appearing to ease a crisis that shook the country for the past week as two rival governments jostled for control.

Sandu took office last weekend as the head of a new coalition government designed to fight corruption and remove a party led by tycoon Vladimir Plahotniuc from power.

But Plahotniuc’s Democratic Party called her a usurper and insisted Prime Minister Pavel Filip was still in charge. Filip stepped down on Friday but demanded a snap election and refused to recognize Sandu’s government as legal. 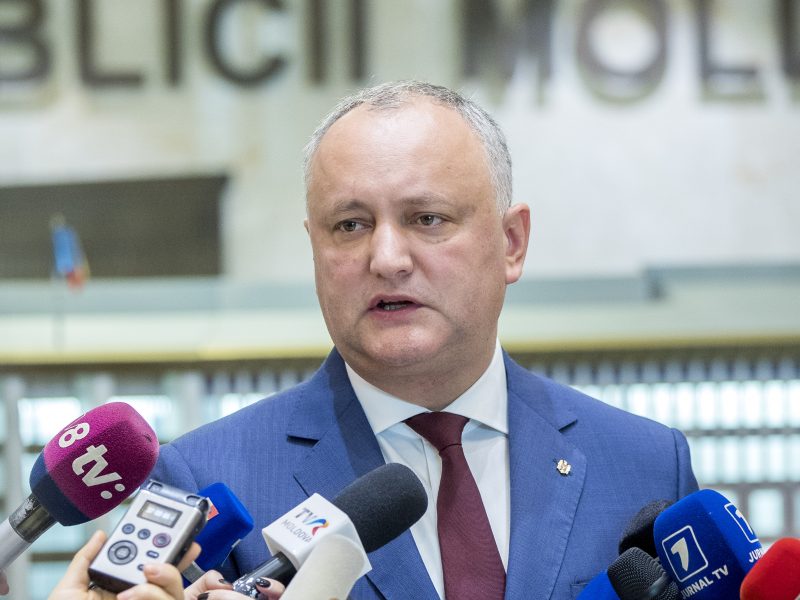 Two governments – one ‘de facto’, one ‘de jure’ – are holding meetings in Moldova’s capital. Each claims legitimacy and accuses the other of usurpation of power. Civil servants are starting to take sides in what is an unprecedented power struggle for the country.

The crisis threatened more instability for one of Europe’s smallest and poorest countries, where the West and Russia vie for influence.

Moldova has been dogged by scandals and the emigration of citizens to Russia or wealthier European countries to find work. Sandu is the country’s eighth prime minister since 2013.

“I have a message to the entire world. Moldova is finally free,” Sandu told a televised briefing.

Earlier on Friday in an interview with Reuters, she laid out some of her government’s priorities: fight corruption, sack dishonest officials, make the electoral system fairer and get foreign aid flowing.

“The biggest challenge of the country is that people are leaving. It’s the young people who are leaving.”

After a February election produced a hung parliament, Sandu, a Harvard-educated former World Bank economist, became head of a coalition government comprising her ACUM bloc and the Socialist party of President Igor Dodon.

It is an unlikely alliance – ACUM wants Moldova to join the EU, while Dodon wants closer ties with Russia.

Sandu told Reuters her government will adhere to Moldova’s current international agreements, including a political and trade pact with the EU rolled out in 2014.

“This is not a natural alliance. There is no question about it, and probably half a year ago nobody would have said that this could happen,” she said.

She is keen to ensure Moldova receives two outstanding tranches of aid from the International Monetary Fund before the current program expires in November.

Sandu joined politics in 2012 as an education minister, where she became well known for her efforts to clamp down on rampant cheating during exams.

Tackling corruption on a national scale would likely prove popular as it is one of voters’ biggest concerns.

It suspended Dodon temporarily to allow Filip as acting president to declare an election in September. Sandu and Dodon ignored the ruling.

The crisis led to two rival governments issuing orders. Sandu’s ministers could not enter government buildings, which were surrounded by police and Plahotniuc’s supporters. She ran her government out of offices in the parliament.

When the man Sandu appointed interior minister tried to enter police headquarters earlier this week, it ended in a scuffle with officers in helmets and balaclavas.

Russia supports the new government. The EU, which froze aid to Moldova last year, said it was “ready to work with the democratically legitimate government”.

The US State Department said it was “encouraged that both the new coalition and the former government have committed to a peaceful transfer of power reflecting the will of the people of Moldova.”

Sandu accuses Plahotniuc of corruption and trampling on democracy. Plahotniuc’s camp says such allegations against him are politically driven lies, and that Sandu’s government would let Moldova fall into Moscow’s orbit.

Filip, for his part, has accused Sandu and Dodon of subverting democracy and called their administration an “illegal, Kremlin-backed government”.

He resigned on Friday but said he only did so because of the pressure being put on his administration.

“Our resignation does not unblock the legal process, because the constitutional crisis continues,” he said.

Sandu called on the Democratic Party to withdraw its supporters from surrounding government buildings and desist from protests.