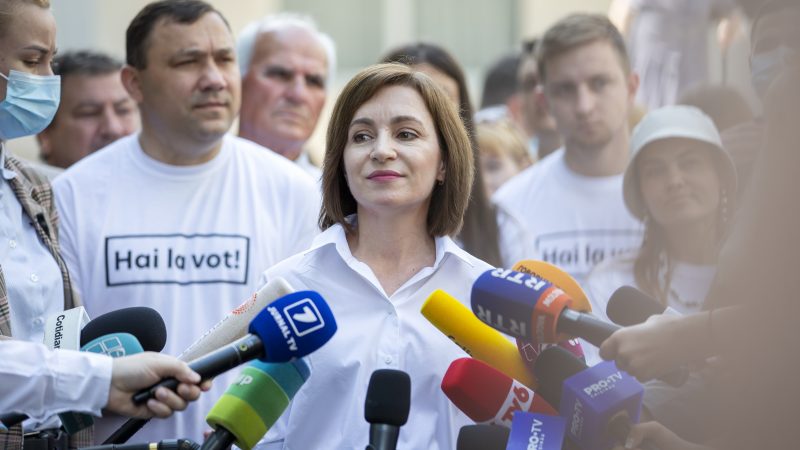 The President of Moldova Maia Sandu speaks to media after voting at a polling station during parliamentary elections in Chisinau, Moldova, 11 July 2021. [EPA-EFE/DUMITRU DORU]

Moldovan President Maia Sandu pledged an “end to the rule of thieves” Sunday (11 July) as her pro-European party looked set to win snap parliamentary elections she called to shore up her position against pro-Russia forces.

Sandu’s centre-right Action and Solidarity (PAS) party was leading with more than 47% of the vote, with 90% of the ballots counted as of 11:45 pm (20:45 GMT), according to the electoral commission.

With ballots still being counted, Sandu’s supporters were celebrating at her campaign headquarters in the capital Chisinau, an AFP correspondent saw.

“There is no more intrigue. Sandu’s party will get the majority,” Alexei Tulbure, a political analyst and the country’s former ambassador to the United Nations, told AFP.

The PAS’s main rivals from the coalition of socialists and Communists, led by former Kremlin-backed president Igor Dodon and former president Vladimir Voronin, picked up about 31% of the votes.

Casting her ballot in Chisinau, Sandu said she had voted for change in the small ex-Soviet country beset by poverty and corruption.

“I voted for an honest parliament to work with, for a parliament that will appoint honest people, competent people,” Sandu told journalists after voting.

Her predecessor Dodon, whom she defeated last year, warned against voting for those who will “hand over the country to external control” as he cast his ballot.

Wedged between Ukraine and EU member Romania, the country of about 2.6 million has long been divided over closer ties with the European Union or maintaining Soviet-era relations with Moscow. Moldova has the status of Associated country to the EU and is a member of the EU’s Eastern Partnership.

One way Sandu has irritated the Kremlin is by proposing to remove the Russian military garrison based in Transnistria, a pro-Russian breakaway region straddling the country’s eastern frontier with Ukraine.

With lawmakers loyal to 46-year-old Dodon blocking Sandu’s promises of reform after her election win in November, she dissolved parliament in April and scheduled the snap vote.

The 49-year-old former World Bank economist’s promises of honesty and competence resonated with many Moldovans, who in recent years have seen their nation rocked by political crises and corruption scandals.

“Maybe we will have a parliament that will think about our Moldova. For the sake of our children, for a beautiful future,” Ana Olari, a 40-year-old confectioner, told AFP.

Sandu, who also served briefly as prime minister, has for many Moldovans become “a symbol of change”, Tulbure said.

More than 48% of eligible voters cast their ballots in the election. That represented a higher turnout than the first round of the presidential vote but lower than in the second round-run off at 53%.

At polling stations, voters had to wear masks and have their temperature taken in a bid to prevent the spread of the coronavirus.

Twenty parties and two electoral blocs ran in the election.

They must cross thresholds set at five percent and seven percent of the votes respectively to obtain seats in the unicameral assembly, where 101 lawmakers are elected for four-year terms.

With 30% of its votes tallied, the PAS had picked up 76% of the diaspora ballots to 9% for the Communists and socialists.

Observers say a win for Sandu’s party will likely be a blow to Russia, which wants Moldova to remain in its sphere of influence.

But “even with a parliamentary majority, it will not be easy to carry out her grandiose plans for in-depth change,” independent analyst Victor Ciobanu said.

“There will be severe opposition” from the pro-Russian side, he added.

Dodon told journalists Sunday evening that he would “decide whether to protest the election results” after all electoral violations were analysed, with Moldovan police saying they had received 242 such reports.