Two governments – one ‘de facto’, one ‘de jure’ – are holding meetings in Moldova’s capital. Each claims legitimacy and accuses the other of usurpation of power. Civil servants are starting to take sides in what is an unprecedented power struggle for the country.

What follows is a drama in five acts.

ACT I – The new-found allies

A surprise new government emerged in Moldova on Saturday (8 June). The Russian-backed Socialist Party and pro-EU ACUM bloc formed a technical coalition at the last minute, after talks between the two had stalled for three months.

On the same day, the newly-formed parliamentary majority appointed a cabinet and adopted its first decision declaring Moldova a captured state, all despite a power cut in the parliament’s plenary. 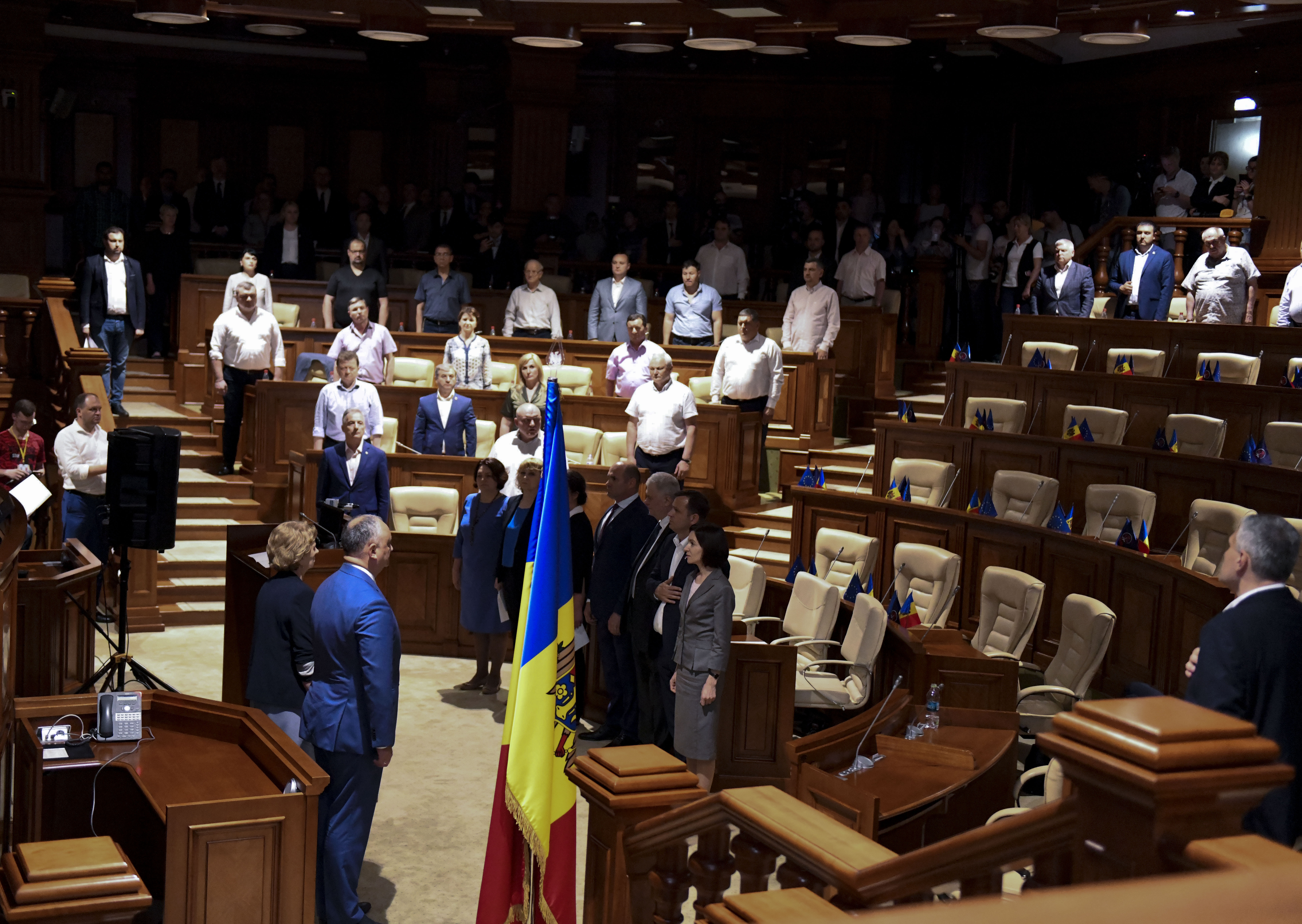 Lights out in the parliament. [Photo: EPA-EFE/STR]

The Democratic Party (PDM), which has held power for the last four years and finished second in February’s parliamentary elections, with 30 out of 101 seats, found itself in the spotlight.

The party, led by tycoon Vlad Plahotniuc, is not in the cross-hairs for the first time. Last year, the European Parliament passed a resolution expressing concerns over Moldova being a “state captured by oligarchic interests” and “ruling political leaders colluding with business interests and unopposed by much of the political class and the judiciary.”

ACT II – The law sides with the power 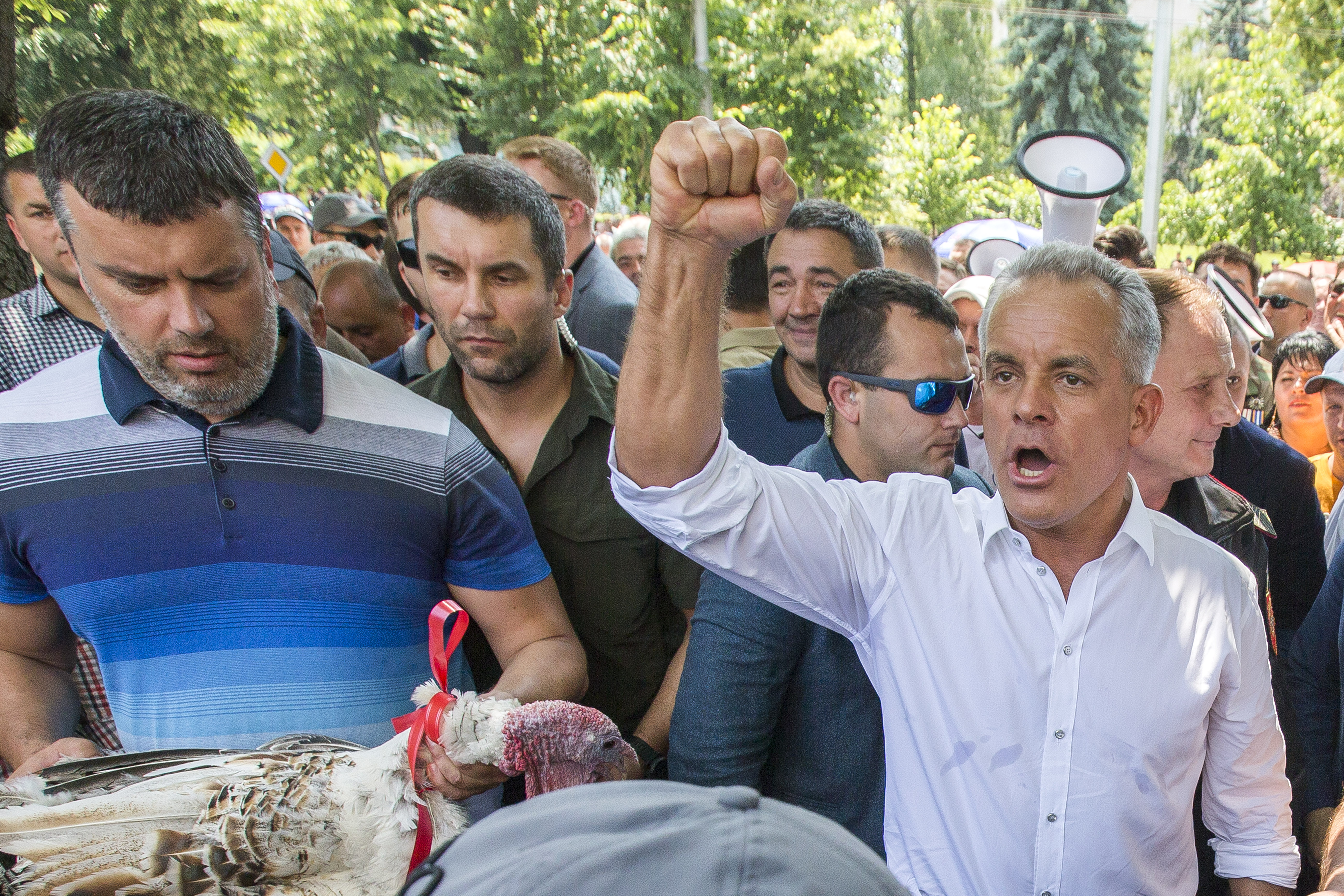 The leader of the Democratic Party of Moldova Vladimir Plahotniuc (R) gestures next to a supporter holding a turkey, before his supporters will throw them over the fence of presidential building, as a sign of contempt and dishonor of the President, in Chisinau, Moldova, 9 June 2019. [Photo: EPA-EFE/DUMITRU DORU]

As backup they use a decision issued by the Constitutional Court on 7 June stating that the three months political parties had to form a functioning government meant exactly 90 days, instead of 92 by calendar.

As a consequence, the new-found allies, the socialists (PSRM) and ACUM, were late by a day in forming a coalition and the Court quickly ruled their decisions unconstitutional.

After the socialist president refused to dissolve the parliament, the Court appointed the democratic party prime minister as interim president. The same day, he called snap elections for 6 September.

The new ‘de facto’ government hit back and condemned the Democratic Party for usurping power and exercising political control over the Constitutional Court.

“For the last years, Moldova has been governed by an oligarch. He lost power in February and now he doesn’t want to leave power,” said foreign minister-designate Nicu Popescu, a diaspora representative who has worked abroad as a foreign policy advisor and researcher for years.

“We’re not holding on to our seats,” Democratic Party representatives insisted “but the law prevails above all”, they claimed, referring to the Constitutional Court’s decisions.

In the meantime, entrances to all ministries have been blocked for days by Democratic Party supporters with tents and police officers. Demonstrators claim to object to a ‘de facto’ government taking office.

Some admitted to the press that they were paid to be there, around €25 a day. Shut out, ministers-designate held meetings in the parliament building. 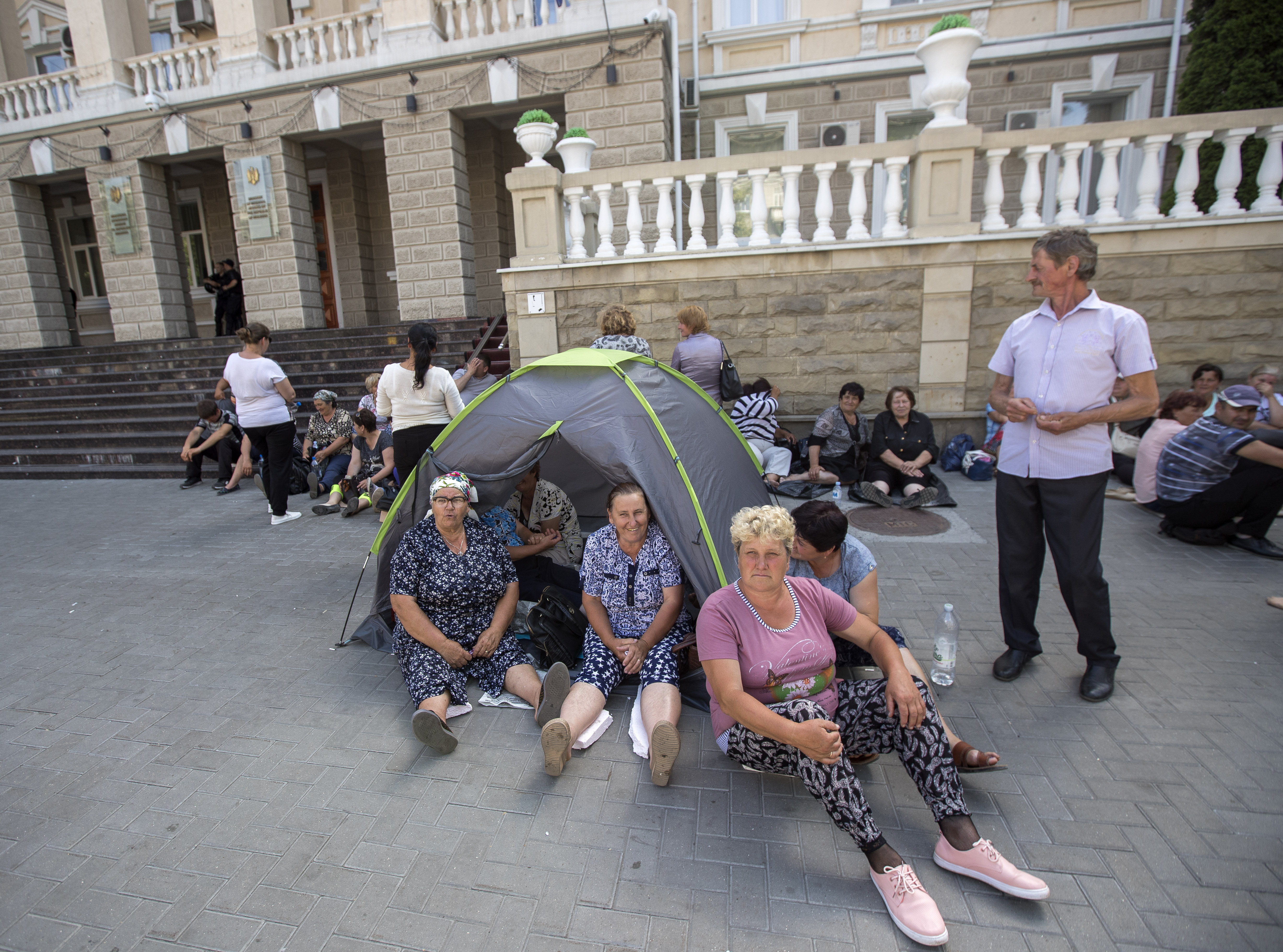 Supporters of Democratic Party of Moldova sit near tents of their protest camp, in front of the general Prosecutors building as they try to block the entrance, in Chisinau, Moldova, 10 June 2019. [Photo: EPA-EFE/DUMITRU DORU]

ACT IV – A hand from abroad

President Igor Dodon has called for international intervention to secure a peaceful transfer of power.

Council of Europe secretary Thorbjørn Jagland called the Constitutional Court decisions “difficult to understand” adding that they seemed “arbitrary in the light of the text of the Constitution and of international rule of law standards”.

The Venice Commission is expected to give a verdict at the end of next week.

Support also came from the EU’s foreign policy chief Federica Mogherini and enlargement Commissioner Johannes Hahn, who said in a statement that “the EU is ready to work with the democratically legitimate government”, headed for the first time by a woman, ex-minister of Education and party leader, Maia Sandu.

Without explicitly mentioning the Sandu government, other countries came forward to support the democratically elected parliament , in spite of the Court’s decisions, including France, Germany, the UK, Sweden and Poland in a joint statement.

Contrary to the EU’s position, Romanian foreign minister Teodor Meleșcanu spoke in favour of snap elections, adding that this was just his personal opinion. Later, the Romanian ministry overrode his statement, by clarifying that it endorses the new government.

Even Russia joined the list of countries welcoming the formation of the government, as it backs the Socialists.

President Dodon, the Socialists’ informal leader, in a leaked video from a meeting with PDM leader Vlad Plahotniuc, allegedly admitted that the party would have received $700,000 a month from Moscow.

The video was leaked by Democratic Party sources hours after the Socialists and ACUM announced a coalition.

The prosecutor’s office was quick to open an investigation into the illegal financing of the Socialist party. “It’s a political decision,” said Maia Sandu, the new cabinet chief, hinting that prosecutors avoided looking into illegal financing during February’s elections.

At the same time, Russia has two lawsuits active against PDM leader Vlad Plahotniuc, one opened just a few days before election day, accusing him of organising a criminal group involved with illegal money dealings.

A few days ago, a lawsuit was launched in Ukraine against Prime Minister Pavel Filip. He is accused of extorting $4 million out of a businessman.

Even though Dodon annulled the parliament dissolution document, it did not reach the Official Monitor.

In the meantime, the Democratic Party is collecting signatures to trigger the president’s removal from office. “They want to get rid of me, either by arresting me, blackmailing me and my family or even by assassination”, warned Dodon a few days ago.

“That is because I’m still legitimately in office and I am the one promulgating the acts that the Parliament adopts,” he explained.

Democratic Party leaders, on the other side, accuse Dodon for having brought to the negotiation table the much contested federalisation plan of Moldova, as a request made by Russia for a potential coalition between PDM and PSRM. As proof, they leaked another video and denounced the president for treason.