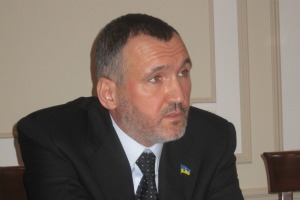 The Ukrainian prosecution will press murder charges against the country’s former Prime Minister Yulia Tymoshenko in two weeks time, Deputy Prosecutor General Renat Kuzmin, who is responsible for her case, announced yesterday (9 May).

While on a visit to Brussels, Kuzmin yesterday gave a wide-ranging interview to EURACTIV. He said the prosecution was to press charges in two weeks time for the 1996 murder Yefhen Shcherban, a member of parliament and one of the richest people in Ukraine.

Shcherban and his wife were killed at the Donetsk airport in 1996 by people dressed as police officers. According to the prosecution, the Shcherbans' murderers have confessed having received $1 million (€742,394) from a bank account linked to Tymoshenko and Pavlo Lazarenko in the 1990s.

Lazarenko was prime minister from 1996 to 1997 and was the mentor of Tymoshenko, president of the United Energy Systems of Ukraine at the time, a private company importing Russian gas to Ukraine. Lazarenko was convicted of money laundering and is serving a prison term in the United States.

Tymosheko has stated that the murder charges against her were "absurd" and clearly politically driven.

“Today the prosecution is investigating this criminal case and is checking the facts showing the participation of Tymoshenko and Lazarenko in the organization and financing of this murder. And the work already done has given results,” Kuzmin said.

Asked if such a development would not throw a shadow over the Euro 2012 football cup, which Ukraine is co-hosting with Poland and starts from 8 June, Kuzmin said that pressing charges did not necessarily result in starting a trial, since Tymoshenko was undergoing treatment and according to Ukrainian law a sick person cannot be prosecuted.

Kuzmin hinted that Tymoshenko was abusing the legal procedure with demands for treatment. He said that 150 women, serving sentences in the Kachinavska women's penal colony in Khakiv where Tymoshenko is jailed, suffer from the same disease and that the conditions of several are worse than hers.

“Tymoshenko today benefits from the best treatment. She is treated by Europe’s best doctors. Especially for her, a clinic has been furbished. She is treated by German doctors, by Ukrainian doctors, by her own doctors. Overall, she has been medically checked [while in detention] 266 times. Not a single prisoner in Europe benefits from medical treatment like Tymoshenko," her prosecutor insisted.

Further, he implied that Tymoshenko had simulated being beaten in hospital, and given ample explanations on her peculiarity of having blue spots appearing on her body and disappearing, without a reason. He also insisted that Tymoshenko refused to give blood samples.

Kuzmin insisted that Tymoshenko’s case has been artificially blown out of proportion.

Asked if he reported to the Ukrainian President Viktor Yanukovich on the Tymoshenko case, he said that it was the duty of his superior, the prosecutor general, to do so.

“Under our constitution, the president has such powers. The presidents appoints the ministers, the prime pinister, the judges, and there is nothing illegal about that. And if the president appoints the prosecutor general and the minister of interior, he has the right to request the specialised bodies to make certain checks, to make sure that the laws of the country are respected,” Kuzmin said.

To read the full text of this interview, please click here.

Viktor Tkachuk, director-general of the Ukrainian Foundation for Democracy "People First", said "There is a high possibility that Tymoshenko's case, the political isolation of the Ukrainian leadership and the high risk of non-transparent results of the future parliamentary elections in Ukraine in October 2012, are all the consequences of a passive position of the Ukrainian people."

"If people want changes - then they should do something. Be active. And if not - then don't shout about injustice," he added.

The European Union said it was "disappointed" with the sentencing of former Ukrainian Prime Minister Yulia Tymoshenko to seven years in prison over allegations that she abused her office in relation to a gas deal signed with Russia in 2009.

0 responses to “Murder charge to be pressed against Tymoshenko”