The conflict in eastern Ukraine that broke out in 2014 has killed more than 13,000 people, left a large swathe of Ukraine de facto controlled by Moscow-backed separatists and aggravated the deepest east-west rift since the Cold War.

The body language between Putin and Zelenskiy, a comedian-turned-politician elected earlier this year on a promise to resolve the conflict, was chilly. There was no public handshake, and they avoided eye contact.

But the talks did deliver specific commitments. A final communiqué set out the prisoner exchange, pulling back troops and a renewed commitment to implement an existing ceasefire agreement in eastern Ukraine’s Donbas region (Donetsk and Lugansk) that has never fully taken hold as well as enhanced powers for international ceasefire monitors. 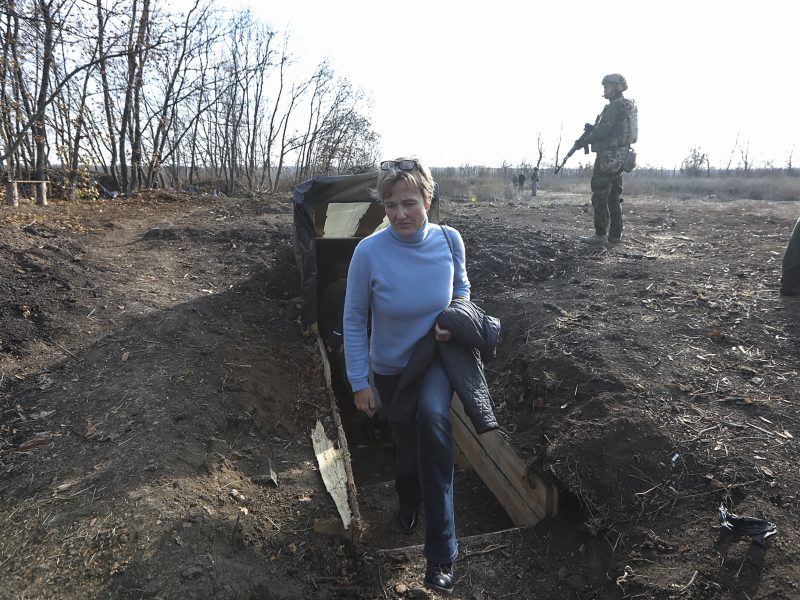 Ukraine’s army and Kremlin-backed separatists are set Friday (8 November) to complete the last phase of a troop pullback in the war-torn east in a key step towards a high-stakes summit with Russia.

The sides also said they had agreed, over the next four months, to work toward local elections in Donbas, a major stumbling block up to now. There were no details though on how the votes would be conducted, and Macron acknowledged there were still disagreements on the subject.

The so-called Steinmeier formula, named after its author, former German Foreign Minister Frank-Walter who is now the President of Germany, is mentioned in the final communiqué, which says that it should be integrated in Ukraine’s legislation.

Specifically, Steinmeier’s formula calls for elections to be held in the separatist-held territories under Ukrainian legislation and the supervision of the OSCE. If the OSCE judges the balloting to be free and fair, then a special self-governing status for the territories will be initiated and Ukraine will be returned control of its easternmost border.

Zelensky said on 1 October that Ukraine had agreed to the “Steinmeier formula.” According to him, it provides for the approval in Ukraine of a temporary law on a special status for Donbas, which will be permanent if the OSCE recognizes local elections in these territories as democratic.

Reportedly, the US is pushing for a sequencing under which Ukraine will gain control over its Russia border before elections in Donbas as held. Reportedly, France and Germany don’t see such a necessity.

The pro-Western opposition in Ukraine interprets the Steinmeier formula as capitulation and state treason. Many in Ukraine think that Zelenskiy, a former comedian, can easily be manipulated by Putin.

“We have made progress on disengagement, prisoner exchanges, ceasefire and a political evolution,” Macron said at a news conference at which Zelenskiy and Putin sat separated by Merkel and Macron. “We have asked our ministers in the coming four months to work on this.”

However, there was no definitive agreement on the political issues that stand in the way of resolving the conflict. These include the status of Donbas within Ukraine and who should de facto control the border between Donbas and Russia.

Another round of talks in the so-called Normandy format, brokered by France and Germany, will be held within four months in Berlin.

Merkel said that by then it is expected that diplomats would work out the conditions for holding elections in Donetsk and Lugansk.

He stated that Donbas, and also Crimea, “are Ukrainian territories”.

In addition, Zelenskiy said he and Putin had worked out the outline of an agreement that would allow the transit of Russian natural gas to continue across Ukrainian soil. He gave no details. A member of the Russian delegation said officials had been instructed to hammer out details.

Russia-Ukraine long-term gas transit contract which supplies with gas many countries of the EU ends on 31 December, while Russia is stepping up two big pipeline projects circumventing Ukraine: Nord Stream 2, bringing gas to Germany under the Baltic Sea, and Turkish Stream, which will ship under the Black Sea.

In his statement, Putin insisted on enshrining in the Ukrainian constitution the “special status” of Donbas on a permanent basis.

Russia believes that the population of Donetsk and Lugansk is overwhelmingly pro-Russian and banks on the creation of a federal state in which one of the entities could veto its strategic goals, including NATO membership. .

Asked if he saw a thaw in relations, Putin said “some sort of it” existed, thanks to the exchange of prisoners, the pulling back of troops and the very fact that the Normandy-type summit took place.

A 2015 ceasefire deal was signed in Minsk, the capital of Belarus. But fighting still flares up in Donbass four years on, and a peace deal has been elusive. Monday’s summit was the first time the four leaders have met under the Normandy format since 2016.

Many Ukrainians are concerned about compromising with Russia. They see Putin as an aggressor seeking to restore the Kremlin’s influence on the former Soviet republic and ruin Ukraine’s aspiration for closer European ties.

Protesters who have warned Zelenskiy about making concessions to Putin in Paris were camped outside the presidential administration in Kyiv, watching the summit news conference on a big screen.

Zelenskiy, who sparred verbally with Russian journalists at the news conference, said he had given no ground on Ukraine’s sovereignty or territorial integrity. He said he and Putin had disagreed on several issues.

Asked who triumphed in their exchanges, Zelenskiy said: “I don’t know who (beat) who. I think it would be appropriate to be diplomatic as we’ve just started talking. Let’s say for now it’s a draw.”

Putin, for his part, is unwilling to be seen to bend to outside pressure over eastern Ukraine, and he does not want to be seen to be leaving the Russian-speaking population of Donbas at the mercy of the Kyiv government.

He expressed only cautious hope for the peace talks. “All this gives us the grounds to suppose that the process is developing in the right direction,” he said.

Sticking to his cool tone, when he ended his remarks to journalists in Paris, Putin thanked Merkel and Macron warmly but offered no pleasantries to Zelenskiy.