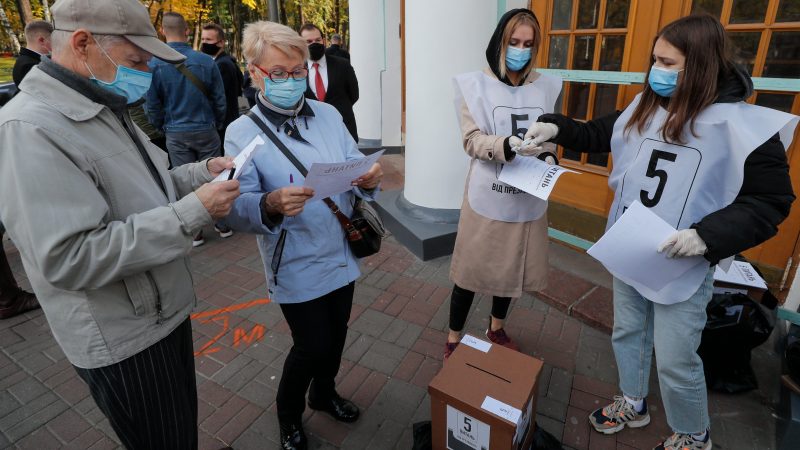 Activists wearing protective masks conduct an exit poll with people who leave a polling station after they voted on the local elections in Kyiv, Ukraine, 25 October 2020. [Sergei Dolzhenko/EPA/EFE]

International observers said Monday (26 October) that local elections in Ukraine were “well-organised and transparent”, but criticised a survey organised near polling stations at the initiative of President Volodymyr Zelenskiy.

On Sunday, the ex-Soviet state of some 40 million people voted to elect mayors and local councils, with no polls in Russia-annexed Crimea and eastern regions controlled by pro-Russian separatists.

Several days before the election, Zelenskiy announced that voters would be asked to answer five questions on social issues, including the legalisation of medical cannabis.

Analysts and the opposition denounced the move as an attempt by Zelenskiy to mobilise his party base.

The poll “appeared to create an undue political advantage on election day and blurred the separation of state and party”, observers from the Organization for Security and Co-operation in Europe (OSCE) said in a statement.

The OSCE added that the “voting process was generally calm, well-organised and transparent”.

Despite its landslide win last year, Zelenskiy’s Servant of the People party suffered a setback in Sunday’s vote, being edged out by rivals in most major cities, exit polls say.

Final results are expected in three to five days, according to the election commission.

Some 5 million Ukrainians took part in the non-binding “opinion poll”.

After analysing three quarters of the questionnaires, the presidential party said that 65% of voters approved legalising marijuana for medical purposes while 83% were in favour of a life sentence for high-level corruption.