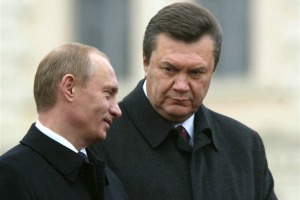 Yatsenyuk, leader of the Batkivschchyna party of former Prime Minister Yulia Tymoshenko and a former minister of economy and of foreign affairs, also announced that he had started the collection of signatures for a no-confidence vote against the government of Mykolay Azarov, the current prime minister.

Yesterday, Azarov stunned the EU by publishing on the government website a statement saying that Kyiv had decided to freeze its talks with the EU and revive economic relations with Russia. Thus, Ukraine abandoned plans to sign a landmark association agreement (AA) with the EU at the Eastern partnership summit in Vilnius on 28-29 November.

Yatseniuk said that by adopting the decision, the government had broken all possible laws and rules governing such actions and so should resign. He said that since he came to power three years ago, Yanukovich had been trying to sell the country to Russia and buy himself the post of 'governor of Malorussia' in the wider Russian empire. ‘Malorussia’ (or ‘Little Russia’) was the name used by Ukraine at the time of the tzars.

“Yanukovich in person got himself guarantees from Russia that he would be re-elected for a second term, a sort of gas price discount, and also 20 billion dollars for himself and his entourage, of which they will steal half, and the other half will be spent for the election campaign, so that Yanukovich would falsify the result and get the post in 2015,” the news website Pravda Ukraine quotes Yatsenyuk as saying.

Yanukovich plans to run for re-election in the next presidentials, in which Russia appears to be backing a candidate, the pro-Russian Viktor Medvedchuk. According to what appears to be a leaked Russian strategy to get hold of Ukraine, ‘Ukrainian Choice’, the political party of Medvedchuk, is seen to play a leading role in promoting the country’s accession to the Russian-led Customs Union.

Recently, Yatsenyuk has shown he was well informed and was quick to accuse Yanukovich of treason over his secretive meeting with Putin in Moscow on 10 November. He also repeatedly warned that the authorities had no intention of signing the association agreement with the EU.

Yatsenyuk also called on Ukrainians to take to the streets of Kyiv to protest on Sunday (24 November) and “show who the sovereign in the country is, and who is fighting for its rights and European future”.

Prime minister: The move was tactical

Speaking in the national parliament, Azarov called the decision “tactical” and the result of the country's poor economic situation. He also said that Ukraine's decision to move towards European integration remained unchanged.

“The decision to put on hold the signature of the AA of Ukraine with the EU is difficult, but it’s the only one possible in the given economic situation in Ukraine. This decision has been dictated only by economic reasons and has a tactical character, thus it doesn’t change the strategic orientation of Ukraine,” he reportedly told Unian news agency.

An EU diplomat, who asked not to be named, said that the difference in the approach of the EU and that of Putin towards Ukraine was that Putin was proposing money to Yanukovich, while the EU was boring him with ‘benchmarks’ and pressure to free his political foe Tymoshenko.

Asked to comment, Maja Kocijancic, spokesperson for EU foreign affairs chief Catherine Ashton, insisted that the EU was not "offering money", but that over time, EU association would result in a substantial improvement of the country’s well-being.

Linas Linkevi?ius, the foreign minister of Lithuania, the country holding the rotating EU presidency, said in a statement that Kyiv's proposal for a trilateral dialogue between Ukraine, Russia and the EU was a no-go (see background).

“The proposal for the trilateral dialogue is not an option and has no precedents. The EU proposal for bilateral association remains on the table and we see no role for third countries in this process,” Linkevi?ius says.

In another statement, the Polish foreign ministry appeared to say that Ukraine could still change its mind in the lead up to the Vilnius summit. Together with Lithuania, Poland has been the most vocal advocate of Ukraine’s EU integration.

“We remind that the final decision on whether to sign the Association Agreement with the EU will be taken by Ukraine’s Security Council and president. The Ukrainian authorities bear the exclusive responsibility for this decision. Poland and the European Union were prepared to make a far-reaching compromise,” the statement reads.

Russian President Vladimir Putin accused the European Union today (22 November) of blackmail and pressure against Ukraine over its decision to suspend preparations for a trade pact that would have wrested the nation further from Moscow's orbit.

"We have heard threats from our European partners toward Ukraine, up to and including promoting the holding of mass protests," Putin told reporters after talks with Turkish Prime Minister Recep Tayyip Erdo?an, as quoted by Reuters.

"This is pressure and this is blackmail. Whether the Ukraine and the Ukrainian leadership will give in to such blackmail will be clear only in the next few days."

Ukraine's jailed opposition leader, former Prime Minister Yulia Tymoshenko, called on Friday for people to take to the streets and protest against the government's decision not to sign the trade deal.

The Ukrainian government announced yesterday (21 November) that it had decided to stop its preparations to sign an association agreement with the EU. The statement made clear that the decision was taken with a view to elaborating measures towards “Russia and other countries from the Community of Independent States”.

Ukraine said it would propose to the EU and Russia the formation of “a tripartite commission to handle complex issues”. Also, Kyiv will “resume an active dialogue with the Russian Federation and other countries of the Customs Union and the member states of the CIS on the revival of trade and economic relations in order to preserve and strengthen joint efforts of economic potential”.