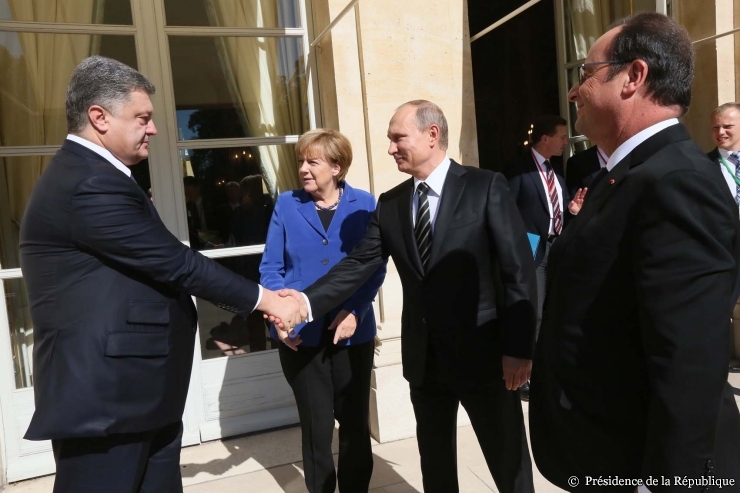 Violence in Ukraine’s separatist eastern territories has ebbed in recent weeks to its lowest point since the ceasefire was signed in February, but Western diplomats say the 12-point Minsk peace plan is far from fully implemented.

“On the election issue … it will take longer. We don’t want elections to get held in eastern Ukrainian territories under conditions that would not respect Minsk,” said Hollande, speaking after hosting talks with the Russian, Ukrainian and German leaders.

“It’s therefore likely, even certain now, that — since we need three months to organise elections — we would go beyond the date that was set for the end of Minsk, that is to say Dec.31, 2015,” he told a news conference.

German Chancellor Angela Merkel told the news conference: “The result (of Friday’s meetings) is that the Russian president committed to working towards … establishing the conditions that would allow elections to take place according to Minsk, based on Ukrainian law, in a coordinated fashion between the separatists in Donetsk and Luhansk and the Ukrainian government.”

The Minsk accord contains a year-end deadline for Ukraine to recover full control over its border.

Ukraine and pro-Russian separatists agreed earlier this week to extend a pull-back of weapons in east Ukraine to include tanks and smaller weapons systems.

Even after the lighter weapons are withdrawn, the sides still need to end a deadlock over the ground rules for local elections.

Hollande said the ceasefire was widely respected and leaders had agreed on the implementation of steps towards peace.

“We wanted to make sure that the withdrawal of light weapons … would start tomorrow morning at midnight,” he said. “For heavy weaponry there must be a similar process, and we should be able to put seals on them.”