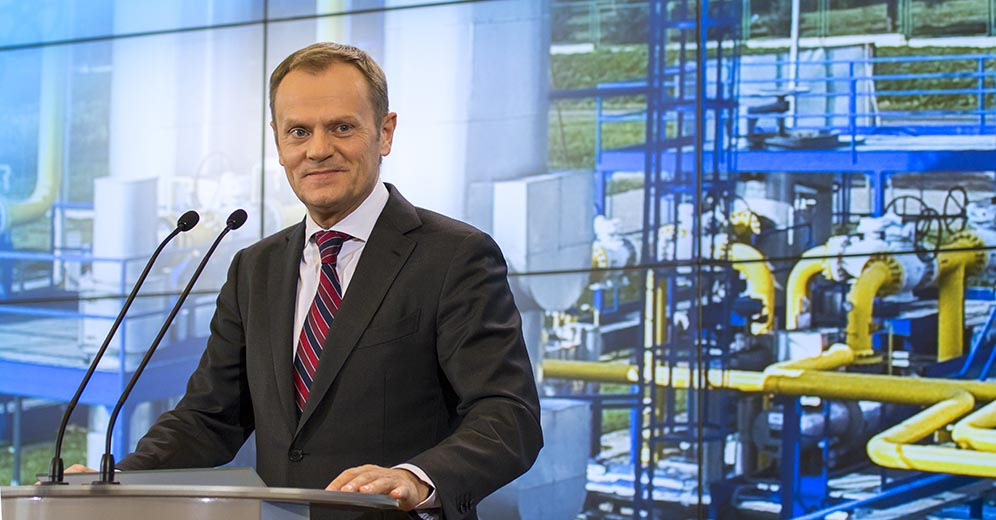 The EU must create an energy union to secure its gas supply, because its current dependence on Russian energy makes Europe weak, Poland’s Prime Minister Donald Tusk wrote in an article in the Financial Times.

Russia, which provides around one third of the EU’s oil and gas, sent shockwaves through the international community with its military intervention and annexation of Ukraine’s Crimea peninsula in March.

The action prompted the United States and its European allies to begin imposing sanctions on President Vladimir Putin’s inner circle, and to threaten to penalise key sectors of Russia’s economy if Russia escalates tensions with Ukraine.

An international agreement to avert wider conflict in Ukraine was faltering on Monday, with pro-Moscow separatist gunmen showing no sign of surrendering government buildings they seized in the east of the country.

“Regardless of how the stand-off over Ukraine develops, one lesson is clear: excessive dependence on Russian energy makes Europe weak,” Tusk wrote in the article.

He noted that the EU was creating a banking union, with a single supervisor, and a single resolution mechanism and fund to close down failing institutions.

The EU was also already jointly buying uranium for its nuclear power plants. The approach to Russian gas should be the same, he said.

“I therefore propose an energy union. It will return the European Community to its roots,” he said.

Such a union should be based on several elements, he said, the first of which would be the creation of a single European body that would buy gas for the whole 28-nation bloc.

Another would be that if one or more EU countries were threatened with being cut off from gas supplies, the others would help them through “solidarity mechanisms”.

The EU must also help finance, even up to 75% of the value of such projects, gas storage capacity and gas links in countries which are now most dependent on Russian gas sold by the state-owned Russian gas monopoly Gazprom.

“Today, at least 10 EU member states depend on a single supplier – Gazprom – for more than half of their consumption. Some are wholly dependent on Russia’s state-controlled gas giant,” Tusk said.

The fourth element was the full use of the EU’s existing fossil fuels, including coal and shale gas.

“In the EU’s eastern states, Poland among them, coal is synonymous with energy security. No nation should be forced to extract minerals but none should be prevented from doing so – as long as it is done in a sustainable way,” Tusk said.

The next element of the energy union would be to sign agreements to buy gas from exporters outside Europe – like the United States or Australia. It could be transported to Europe by ship in liquefied form, Tusk said.

Finally the EU should strengthen the existing Energy Community of the EU and eight of its eastern neighbours, created in 2005 to extend the European gas market eastward.

“True, this will require Europe’s governments to take a unified position. But such feats of co-ordination have been achieved before,” Tusk said.

European leaders already agreed in March to accelerate their quest for more secure energy supplies in response to Moscow’s annexation of Crimea and asked the executive European Commission to draw up detailed proposals by June on how to do that.

EU statistics office Eurostat’s energy dependence indicator, documenting the extent to which EU relies on imports, reported that imports climbed to 65.8% in 2012 from 63.4% in 2009.

The share of Russian gas rose to around 30 percent from 22 percent in 2010, while Russia’s oil imports accounted for around 35 percent of EU use.

At the 20-21 March EU summit, EU leaders tasked the European Commission to come up with a plan for decreasing energy dependence from Russia [read more]. The EU executive is expected to table such a proposal before the 26-27 June EU summit.

But in the meantime, Russia slammed Ukraine with new gas prices, over 40% higher than the “discount” Russian President Vladimir Putin gave to former Ukrainian President Viktor Yanukovich after he refused to sign the Association Agreement with the EU.

In recent years, the EU had made possible “reverse gas flows”, meaning sending gas to Ukraine from Poland and Hungary, from where nearly 2 bcm of gas have already been imported, as well from Slovakia, where technical problems still need to be resolved. Although this was basically Russian gas, it was still cheaper than the price of around $400 per tcm Kyiv was paying until the December 2013 agreement.