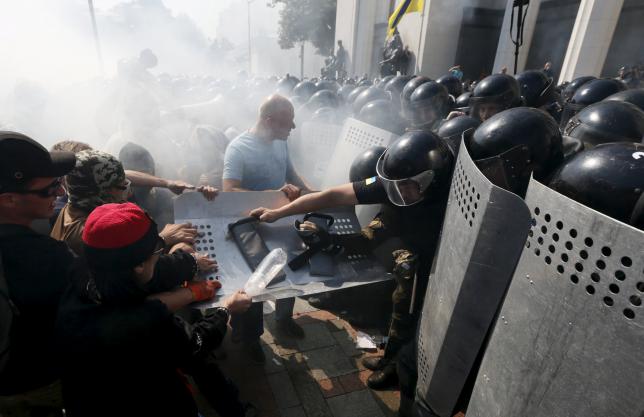 Right-wing demonstrators, against a constitutional amendment on decentralization, clash with police outside the parliament building in Kyiv. [Reuters]

One National Guard serviceman was killed and several policemen badly wounded today (31 August), when an explosive device was thrown by far-right Svoboda Party and Right Sector protesters outside parliament, the Kyiv Post reports.

The violence broke out shortly after parliament passed on first reading a controversial bill on decentralizing power in Ukraine. Opponents of the bill says it capitulates to Russian demands that Ukraine adopt a federalized system of government. In fact, the decentralization is a commitment Ukraine took when it signed the Minsk agreement last February (see background).

On a visit to Brussels on 27 August, Ukrainian President Petro Poroshenko told Commission President Jean-Claude Juncker that the decentralization bill will face a first vote on 31 August.

Anton Gerashchenko, a lawmaker and adviser to the Interior Ministry, wrote on his Facebook page that 25-year-old Igor Derbin, a National Guard serviceman who had just started his service last spring, died in hospital from a wound to his heart incurred during the attack.

Ukrainian television channel 112 Ukraina reported that four officers had been seriously injured in the attack, while dozens of others received lighter injuries.

Earlier, some Ukrainian media, citing Kyiv Mayor Vitaly Klitchko, reported that one of the officers had died of injuries received from the blast, but there had been no official confirmation.

Video footage uploaded to YouTube showed what appears to have been a hand grenade being thrown from the crowd of protesters at police. The explosion knocked one officer to the ground, and several others can be seen limping immediately after the blast. Some viewers may find these images disturbing.

Photographs from the scene posted online shortly after showed patches of blood on the steps and on the ground near the side entrance of the Parliament, and Svoboda flags and riot gear lying on the ground. In one picture, a riot officer is seen lying on the ground and being given first aid beside the wall of the parliament building.

As news spread that MPs had voted to approve the first stage of the bill’s passage through Parliament, nationalist protesters, some masked, pushed at police lines, beating officers with sticks and snatching riot shields from them. A smoke bomb was then thrown at the side of parliament.

Riot police were then moved forward in force to form a cordon about five officers thick around the parliament. Protesters continued to attack them. Live broadcasts from the scene showed police using tear gas on the crowd, and protesters apparently hurling the gas canisters back at police.

Then the grenade was thrown.

Ambulance sirens started to blare in central Kyiv as reports of severe injuries among riot officers at the Parliament began to appear online. According to news agency Interfax-Ukraine, citing an MP, three dozen people were injured by the blast. Some were reported to have life-threatening injuries. As more news of the attack started to come in, the number of those reported injured rose from 10, to twenty, and then to 90, according to a Facebook statement by Interior Minister Arsen Avakov.

A Kyiv Post reporter at the scene estimated that there were over 1,000 protestors gathered at the Parliament building. Police sources said 3,500 officers were protecting the building.

The Interior Ministry said it had detained one person in connection with the incident, in a statement issued after the attack.

The bill on decentralization, which is designed to satisfy Ukraine’s commitments under the Minsk II peace agreement signed on 12 February, caused serious splits in Ukraine’s governing coalition, but in the end it was passed in the first reading by 265 votes – well above the 226 needed for such a bill to pass.