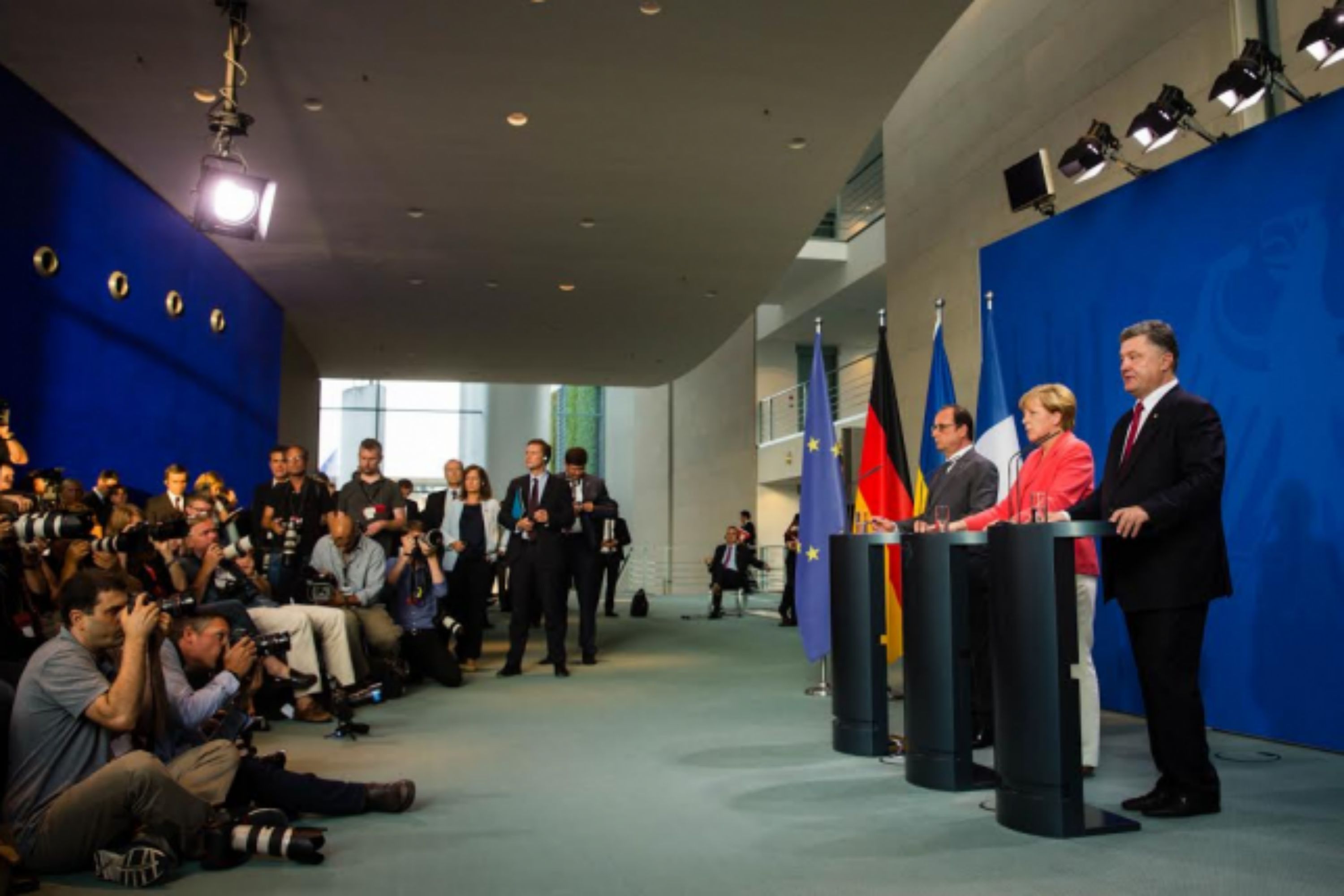 Hollande, Merkel and Poroshenko in Berlin on 24 August. [Ukraine Presidency]

President Petro Poroshenko said on Monday (24 August) that Ukraine is facing a precarious year struggling to fend off Russian efforts to undermine Kyiv’s drive for closer relations with Europe.

He spoke at a ceremony in central Kyiv to mark 24 years of Ukrainian independence from Moscow, its Soviet-era ruler, and then travelled to Berlin for talks with the leaders of France and Germany on the implementation of a frequently violated ceasefire deal with pro-Russian rebels holding parts of eastern Ukraine.

“We have to get through the (coming) 25th year of independence as if on brittle ice. We must understand that the smallest misstep could be fatal. The war for Ukrainian independence is continuing,” he said, addressing a crowd of several thousand.

At a news conference later in Berlin with Chancellor Angela Merkel and French President François Hollande, Poroshenko expressed his appreciation for their backing. “I’m extraordinarily thankful for the support and the efforts for de-escalation.”

Merkel lamented that the ceasefire agreement was not being respected and said everything must be done to fully implement the broader peace deal reached in Minsk in February (see background).

On 18 August, Russian President Vladimir Putin blamed the Ukrainian government for the latest upsurge in fighting between Kyiv’s forces and Russian-backed separatists in the east of the country.

Poroshenko said Ukraine strictly fulfilled the undertaken commitments on the ceasefire regime, cooperation with the OSCE, withdrawal of heavy weaponry, implementation of humanitarian issues, including the creation of three humanitarian-logistics centres by the end of this month, which will significantly simplify the life of Ukrainians in the occupied areas.

Merkel called it a great achievement that “constitutional amendments in Ukraine have been organized as it had been agreed in Minsk”. But she added that the Russian side had different views regarding the constitutional changes required by the Minsk agreement, and that legal experts also had diverging views on the matter.

Merkel also said that there was no solution yet to the issue of elections on the territories of Donetsk and Lugansk, as required by the Minsk agreement. Poroshenko warned of the danger of fake elections on 18 October that do not comply with Ukrainian legislation.

Earlier in Kyiv, Poroshenko had said 50,000 Russian troops were massed along the Ukraine-Russia border and a further 9,000 were supporting pro-Russian rebels in separatist territories. New military convoys had been tracked crossing the border into Ukraine last week, he added.

He accused Russia of having sent a total of up to 500 tanks, 400 artillery systems and up to 950 military armored vehicles to pro-Russian rebels, although he did not specify the time period for these deliveries.

While the threat of “full-scale military invasion” remains, Russia “also has an alternative strategy – to undermine the situation in the middle of our country and to put the country at loggerheads with key (foreign) partners, isolating it with the aggressor,” he said.

Russian Foreign Minister Sergei Lavrov branded Poroshenko’s comments as “unfounded and disgraceful”, adding: “Their goal is to break the ‘genetic code’ ensuring the unity of our nations. I think he won’t succeed in that.”

Russia, which annexed Ukraine’s Crimea peninsula last year after an uprising toppled a pro-Russian president in Kyiv, has dismissed accusations by NATO and other powers that it has sent arms and troops to back separatists in the east.

Both sides have withdrawn large numbers of heavy weapons from the conflict zone in line with February’s Minsk peace agreement, but clashes still take a steady toll of lives daily.

Lavrov reiterated that Russia wanted Germany and France to put pressure on Poroshenko to stick to Ukraine’s commitments under the Minsk agreement and to grant the rebel regions greater autonomy. Russia says changes to the Ukrainian constitution to that end fall short of what had been agreed.

More than 6,500 people have been killed since fighting erupted in April 2014.

Haircut of 20% seen for Ukraine

In the meantime, sources said Ukraine and a group of its largest creditors are close to agreeing a restructuring deal that will include a 20% writedown on the principal of about $19 billion of debt.

Five months of excruciating negotiations between Kyiv’s cash-strapped leadership and some of the world’s biggest commercial creditors have reached the finishing line with the outcome still in serious doubt.

A source familiar with the talks told Reuters: “The committee is keen to facilitate a deal as they recognise that Ukraine faces very special circumstances. Their position is clear: they have never believed a haircut is necessary but despite this, in order to get the deal done, they have made a very significant concession.”