Power and opposition in Ukraine test their limits as protests spread 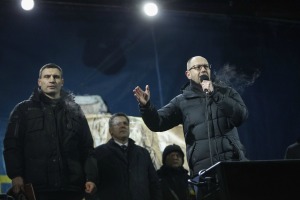 Police clashed with protesters in central Kiev yesterday (26 January) and the fate of Ukraine's government remained uncertain after embattled President Viktor Yanukovich offered important posts to opposition leaders, including the role of prime minister to Arseny Yatsenyuk, the leader of the Batkivschchyna party of former Prime Minister Yulia Tymoshenko.

Vitaly Klitschko, a former international boxing champion, was offered the job of deputy prime minister responsible for humanitarian issues, the presidential website said. Klitschko confirmed it on Twitter, adding he would give his reply later.

The two-month standoff has sparked the worst violence in Ukraine since it won independence in 1991, after the collapse of the Soviet Union. At least six people have been killed, according to the prosecutor's office and medical staff, and the crisis has deepened tensions between Russia and the West.

The presidency linked its offer to the opposition as a way to rein in violent protesters. Though the protest movement is largely peaceful, a hard core of radicals has been fighting pitched battles with police away from Independence Square.

Protesters have occupied municipal headquarters in up to ten western regions, where the opposition is strongest, but there is also unrest in traditionally pro-Yanukovich areas of eastern Ukraine and the south.

But over the weekend, protests also spread into southern and eastern Ukraine, the heartland of Yanukovich’s power base.

Live footage from the Espreso TV station showed several thousand people trying to occupy the main municipal building in the eastern city of Zaporizhzhya before being repelled by police using tear gas and stun grenades.

About 3,000 more tried to storm the regional headquarters in Dnepropetrovsk, birthplace of jailed opposition leader Tymoshenko, and were blockading the building.

In recent days, protestors are getting hold of government buildings. Over the past night in Kyiv protestors from a group called “Common cause” seized the Justice Ministry, having already occupied the Agriculture Ministry and several other buildings in the area of the Independence Square, or Maidan.

The minister of justice, Elena Lukash, said that she would turn the country’s National Security Council and ask for martial law to be introduced immediately if the justice building was not vacated, the Ukrainian daily Pravda reported.

Klitschko asked the group 'Common cause' to leave the building, but they reportedly refused.

Klitschko described Yanukovich’s power-share offer as a "poisoned" attempt to divide the opposition and kill off mass protests.

Emboldened opposition leaders said they would press for more concessions, including early elections, setting the stage for a tough political battle when parliament meets for a special session on Tuesday.

After emerging from talks with Yanukovich, Yatsenyuk, a former minister of economy and foreign affairs, spoke to the crowds in Independence Square, enumerating the conditions of the opposition, which the president had accepted:

He added, as quoted by the website Levyi bereg:

Yatsenyuk added that Ukraine should return to the constitution from 2004, which provided for limited powers for the president.

“Tuesday is the day of reckoning”, he said, referring to a key session of the parliament to be held tomorrow. He added “We don’t believe a single of [Yanukovich’s] words, we believe only in results”.

For the opposition, accepting Yanukovich's offer to serve under him in a revamped government carries the risk of breaking faith with thousands of peaceful demonstrators as well as alienating more radical protesters over whom it has only tenuous control.

Opposition leaders said they would press their calls for early elections and a repeal of the new anti-protest laws.

Klitschko told the German newspaper Bild am Sonntag: "This was a poisoned offer by Yanukovich to divide our protest movement. We will keep on negotiating and continue to demand early elections. The protest by Ukrainians against the corrupt president must not have been in vain."

Opposition leaders say Yanukovich has betrayed Ukraine and are calling for an election long before the next one is due in spring 2015. Klitschko said it must be held this year.

The United States has warned Yanukovich that failure to ease the standoff could have "consequences" for its relationship with Ukraine. Germany, France and other Western governments have also urged him to talk to the opposition.

"The situation is tense and serious. The days ahead will determine which way Ukraine heads in the future. I believe that there is only one piece of advice we can give: Ukraine's path into the future cannot be found with the use of violence, no matter which side it comes from," German Foreign Minister Frank-Walter Steinmeier told reporters on Sunday.

Pope Francis called for an end to the turmoil and for all the parties to engage in "constructive dialogue".

Russia on Saturday stepped up its warnings against international interference in Ukraine, telling European Union officials to prevent outside meddling and cautioning the United States against inflammatory statements. President Vladimir Putin is due to visit Brussels tomorrow for what promises to be a tense EU-Russia summit.