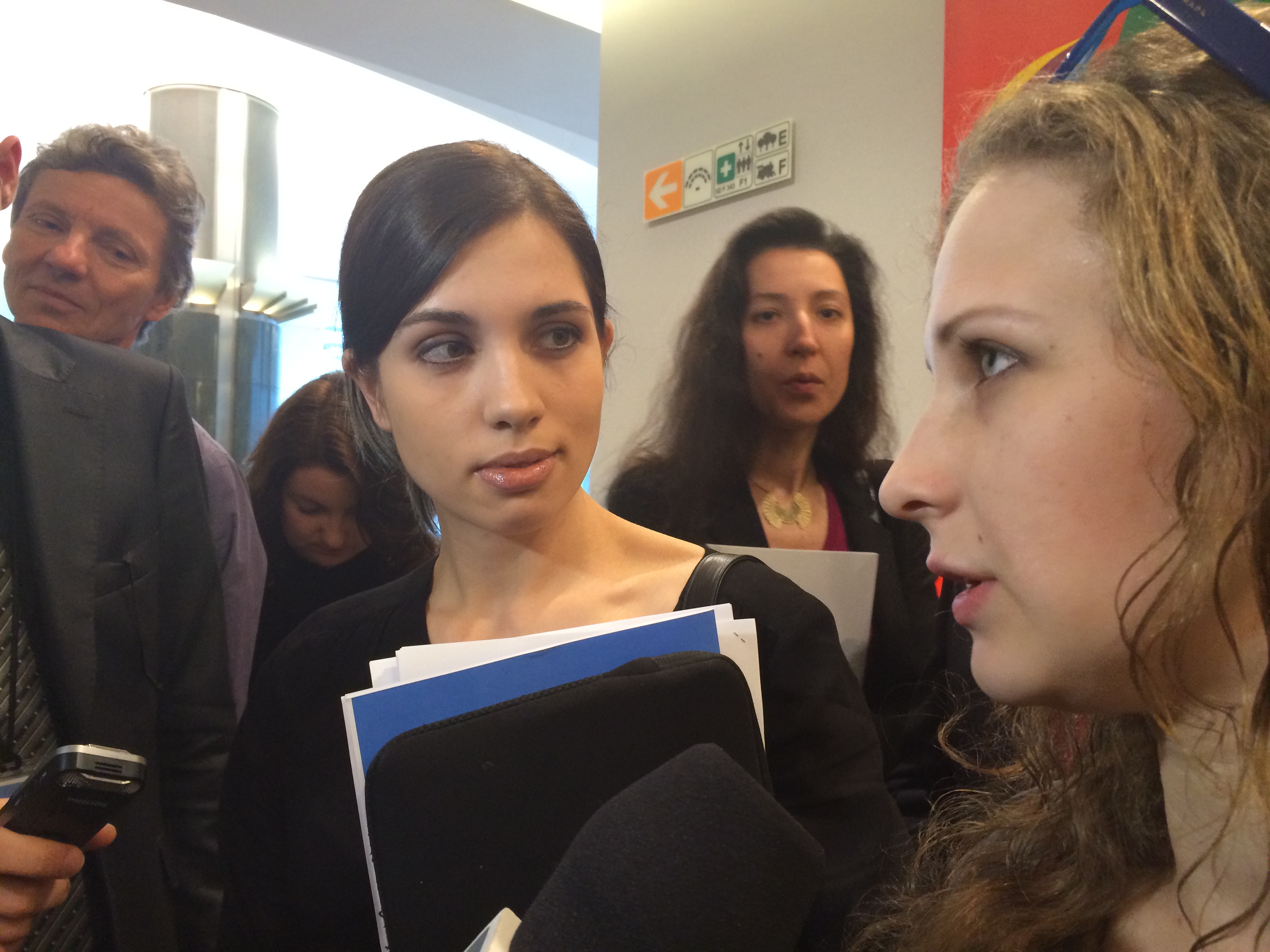 Speaking at a press conference in the European Parliament, hosted by Greens and the European Free Alliance group, Orlov was joined by the best-known members of band, Tolokonnikova and Alyokhina, to explain why a tougher stance on sanctions is necessary in the wake of Moscow’s annexation of Crimea.

The activists defended the idea that the Crimean annexation was a Putin-like response to his faltering popularity ratings.

“The patriotic hysteria in Russia, on the back of the Crimean operation, is being instrumentalised by Putin to increase his ratings, and prolong his reign for many years to come,” Orlov argued. “He had been enjoying less popularity, but the patriotic wave brought him unprecedented fame, and a new term is now possible,” he said fearing that “we can expect the craziest things now.”

Accompanied by an ever more brutal stifling of all critical media in the country, the rule of Putin seems to be assured at least until 2024, the Pussy Riot members said.

“There is no more freedom of expression in Russian media,” Alyokhina insisted, calling to “break the vacuum” by setting up alternative information resources on the Internet. But the human rights advocates said the situation was so bad, it might be “time to start disseminating clandestine print materials, like in the 19th century.”

The Russian “law on foreign agents” – a Cold War-style law passed in 2012, aimed at suffocating non-governmental organisations, especially those active on human rights issues – was stressed by the speakers as another serious violation of fundamental rights and democratic standards. Oleg Orlov reminded the audience that under that law, he could be considered a traitor by the government because he consults with international organisations.

Despite increasing talk of a possible invasion of eastern Ukraine, and other former Soviet states, the speakers incessantly stressed that the Russian president’s activities were first and foremost directed towards Russian public opinion, and that they did not expect a military invasion in Ukraine, but rather “a clandestine underground war” in the neighbouring country.

The upcoming elections, they said, need to be “watched closely” by international observers, since the poll “will be Putin’s focus”, as he will try to “undermine” them.

“The elections have to be secure and we need legitimate results. Putin cannot afford fair elections in Russia, nor in Ukraine,” said Alyokhina, warning of attempts to destabilise Kyiv through Russian propaganda.

The Pussy Riot members said they recently visited Ukraine, where they found “order is respected” and that is is “clear and clean, and the population is friendly”, a testimony at the opposite of what Russian media depict as a “dangerous place” for ethnic Russians.

Much in the vein of what political prisoner Alexey Navalny wrote in an op-ed in the New York Times, the Pussy Riot members called on Europeans – and Americans – to target more of Putin’s closest allies through sanctions, which is “the only language they understand”, Tolokonnikova said.

In their opinion, the EU should sanction specific people such as the Prime Minister, Dmitry Medvedev, and Deputy Prime Minister, Igor Sechin, as well as key persons in the Russian gas business for example. But “the sanctions should not be aimed at the Russian population.” Like Navalny, Russian human rights activists believe that such targeted measures would be supported by the Russian people.

Tolokonnikova warned that Putin is “raising a new iron curtain” between Moscow and Europe and “strives to isolate the Russian people” from the rest of the world.

Only targeted asset freezes and visa bans would make a difference among the President’s oligarchs responsible for the authoritarian line, since they “enjoy money and enjoy travelling”.

The current sanctions are a “laughing matter” for the Russian head of state, they said, and should be extended to hundreds of key persons.

The activists also asked the EU to “better control its funds directed to the Russian Federation” and warned that the money from those projects “end up in personal pockets”.

The three speakers made it clear that it is not up to the EU or the USA to “import democracy to Russia”. “That is something that can only come from inside,” the Sakharov Prize laureate reminded the audience.

Vladimir Putin triumphed in Russia's presidential election on 4 March, but his opponents refused to recognise the results and said they would press ahead with the biggest protests since he rose to power 12 years ago.

Putin was already president in 2000-2008 and remained Russia's dominant leader. He stepped aside in 2008 to make way for his ally, Dmitry Medvedev, because he was barred from a third presidential term by the constitution. Putin served as prime minister in the meantime.

Some voters said Putin, who has portrayed himself as a man of action and guardian of stability, was the tough national leader the world's biggest country and energy producer needed.

But others are tired of his macho antics, such as riding a horse, bare-chested, and a political system that concentrates power in his hands. Many fear that his third term as President will mark a return to autocracy.