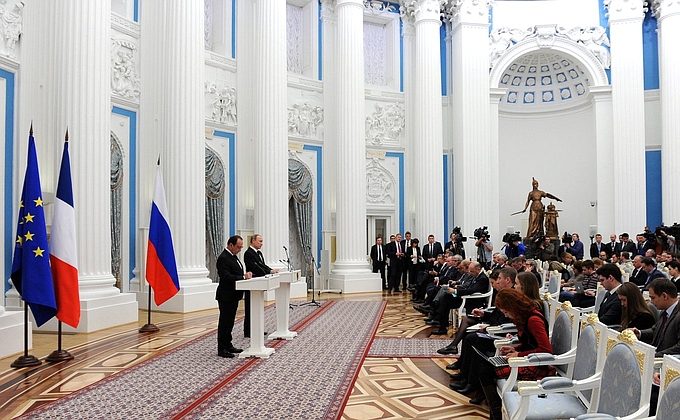 Hollande and Putin at Kremlin presser, 26 November [The Kremlin]

No broad coalition to fight Islamic State has emerged after talks between Russian President Putin and his French counterpart, François Hollande. But the two agreed to step up their cooperation as the basis for a possible alliance.

Russia will keep cooperating with the United States and its partners to fight Islamic State in Syria, but that cooperation will be in jeopardy if there are any repeats of Turkey’s shooting down of a Russian jet, Putin said.

Speaking to the press after talks in the Kremlin with his French guest, Putin voiced lingering anger at Turkey’s actions, saying he viewed the downing of the jet as an act of betrayal by a country Moscow had thought was its friend.

But he said he would order Russia’s military to intensify cooperation with the French armed forces – including exchanges of information about targets – and viewed that as part of creating a broader international coalition bringing together Russia and Western states.

“We have respect for the coalition which is led by the United States, we are ready to cooperate whit it. We consider that it would be better to create a united, a common coalition, to coordinate our common work in such conditions would be easier, simpler, and in my view, more effective,” Putin said, adding that Russia’s Western partners were “not ready” to such a coalition.

When Hollande visited US President Barack Obama in Washington on 24 November, it became clear that the US rejects the French idea to build a broad coalition.

Putin added that Russia was ready to work “in any format” that is acceptable to the Western partners. “We are ready to cooperate with the coalition led by the United States,” he said.

“But of course incidents like the destruction of our aircraft and the deaths of our servicemen… are absolutely unacceptable,” Putin added. “And we proceed from the position that there will be no repeat of this, otherwise we’ll have no need of cooperation with anybody, any coalition, any country.”

He said he and the French leader had “agreed how we will cooperate in the near future, on a bilateral basis and with, as a whole, the coalition led by the United States.

“We are talking about a designation of the territories against which we can conduct strikes, and where it is better to refrain from strikes, about the exchange of information on various issues, and the coordination of our actions on, so to speak, the battlefield,” Putin said.

On bilateral cooperation with France, he said the aim was to “establish constructive work by our military specialists to avoid duplication and avoid strikes on those territories and groups which are themselves ready to fight terrorism”.

“We view this as the formation of a wide anti-terrorist coalition under the aegis of the United Nations,” Putin said.

The Russian leader said, under the cooperation already established with the US-led coalition, Russia’s military had passed on details of the flight plan of the jet that was shot down this week.