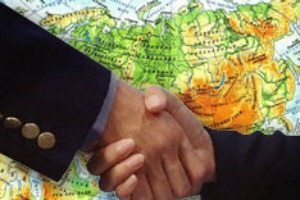 Russia's President Vladimir Putin made it clear that his country cannot advance negotiations on a new basic treaty with the EU, unless Brussels formalises relations with the so-called "Common Economic Space" – its Customs Union with Belarus and Kazakhstan.

Direct talks are needed between representatives of the EU and the Common Economic Space, because on a range of questions Russia has surrendered national competence to a supra-national body, Putin said at the final press conference of the EU-Russia summit yesterday (4 June) in St. Petersburg.

Later, he launched the idea of a Eurasian Union, bringing together countries that Russia shared strong ties with – a move seen as an attempt to revive some of the defunct Soviet Union's glory. The “Common Economic Space” is largely seen as a creation of this union.

In Putin’s words, his European Union counterparts – Commission President José Manuel Barroso and Council President Herman Van Rompuy – had explained that the EU did not have a mandate for negotiations with the Common Economic Space.

“I think that such a mandate can and should be obtained,” the Russian President said.

“We are convinced that the setting up of the Customs Union, of the Common Economic Space, and in the future, possibly, of the EurAsian economic union, are fully compatible with the tasks of enhancing the cooperation between Russia and the European Union”, Putin said in his speech.

Russia’s Customs Union with Belarus and Kazakhstan has already delayed Moscow’s accession to the World Trade Organisation (WTO). It is unclear how Russia benefits from such tactics.

Brussels and Moscow have been negotiating a new basic agreement for their relationship since 2008 but have advanced little in the last year and a half, largely due to the uncertainties around Russia’s WTO accession, which Russia signed up to last December. Technically, Russia’s membership could become effective this summer.

Putin told EU leaders that they should “take into account” the decision of Belarus and Kazakhstan to commit to the Customs Union's conditions, compatible with WTO rules, and support those two countries' bids to join the WTO.

“The idea of the Eurasian Economic Union, if based on the WTO-rules, could lead to positive contribution to trade, prosperity and cooperation,” he said.

Just before the EU-Russia summit, Putin visited Belarus and held discussions with the country’s President Alexander Lukashenko, known as “Europe’s last dictator’. There, Putin called Belarus “our closest relative” and said that their relationship went beyond cultural, ethnic and cultural roots, to span the present-day integration of the two countries in the economic field.

On the Kremlin's website, Lukashenko was quoted as saying that the Customs Union and the Common Economic Space were also appealing to other countries, particularly Ukraine.

“For the time being, they [the Ukrainian leadership] still have some hesitations, but […] there is movement in this direction,” he said.

In a commentary published on the website Czech Position, Jana Kobzová from the European Council on Foreign Relations and Tomáš Valášek from the Centre for European Reform contended that while the EU and NATO had little interest in further enlargement, Russia was ever more determined to put a Eurasian Union in place.

“Putin believes that each great power should have its “entourage,” and that the West will take Russia more seriously if it leads a cluster of neighbours,” the two authors argued.

Vladimir Putin - president from 2000 to 2008 - has remained Russia's dominant leader and its most popular politician since stepping aside to make way for his ally, Dmitry Medvedev, because he was barred from a third straight term by the constitution. Putin has served as prime minister since.

In a choreographed congress of Putin's United Russia party on 24 September 2011, President Medvedev agreed to lead a list of candidates for a parliamentary election on 4 December 2011 with a view to becoming the next premier, and won a standing ovation for current Prime Minister Vladimir Putin by proposing that he run for president in March 2012.

Putin won the 4 March presidential election with 63.7% of the votes, while opponents complained of widespread fraud. He was inaugurated as President on 7 May.