Putin tells Ukraine to rethink its drift towards the EU 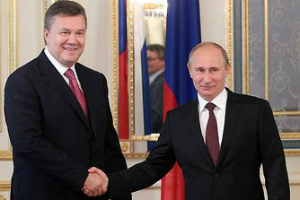 Russian President Vladimir Putin urged Ukraine to weigh carefully the benefits of joining Russia's regional trade bloc against its plans for closer ties with the European Union on a visit to Ukraine to attend a religious festival.

Putin used references to common history to remind Ukraine of the potential benefits of a closer alliance with Russia, just four months before a summit in the Lithuanian capital Vilnius where Kyiv hopes to sign landmark deals with the European Union.

"There is tough competition going on for the global markets. And I am sure most of you realise that only by joining forces we can be competitive and win in this rather tough struggle," Putin told a conference in Kyiv on Saturday (27 July).

Putin was visiting Ukraine for the 1,025th anniversary of a mass baptism which marked the consolidation of Kyivan Rus, the mediaeval state from which the Russian Empire later grew.

He cited figures showing that while Russia's trade with Ukraine fell 18% in the first quarter if this year, trade turnover within the Moscow-led post-Soviet Customs Union bloc grew by 2-3%.

Russia, averse to Ukraine's move towards the EU, has long urged Ukraine to join the Customs Union bloc. It has even hinted that Kyiv could get a discount on Russian gas supplies on which Ukraine depends heavily but which it says are being sold for an "exorbitant" price today.

But Kyiv's planned agreements on free trade and political association with the European Union, which it hopes to sign in November, will rule out the possibility of a trade deal with the Russia-led bloc.

And although Putin said on Saturday that Moscow "will respect any choice made by our Ukrainian partners, friends and brothers", Kyiv cannot ignore the risk of retribution from Russia, the main market for Ukrainian exports, in the form of trade restrictions.

While Ukrainian President Viktor Yanukovich showed no signs of having second thoughts regarding the EU deals, he tried to sweeten the pill.

Yanukovich stressed Russia's role as a "strategic partner" when he and Putin travelled to the southern port city of Sevastopol where Russia leases a base from Ukraine for its Black Sea navy. "We appreciate and value our friendship with Russia," he said.

In a more material move, he pledged that Ukraine, which has so far opposed Russia's efforts to upgrade vessels in the ageing Black Sea navy, would give it the green light.

"President [Yanukovich] said that the Ukrainian government would do everything it can to make sure that navy upgrade programmes are carried out," his office said in a statement.

An association agreement with Ukraine was initialled more than a year ago but the EU made its signature conditional on progress made in areas such as democratic and judicial reforms, including the release from prison of former prime minister Yulia Tymoshenko.

The draft agreement offers closer political and economic cooperation, but stops short of offering a path towards EU accession.

Ukraine hopes to sign the agreement at the 28-29 November Eastern Partnership Summit, to be held in Vilnius under the Lithuanian EU presidency. Several EU leaders, especially from the former Soviet bloc countries, are pushing for a signature of the association agreement in Vilnius, out of geopolitical considerations. Lithuania, which took over the rotating presidency on 1 July, puts high hopes on the summit's success.