Ekaterina ‘Eka’ Zguladze-Glucksmann is a Georgian and Ukrainian government official. Before joining the government of Ukraine in December 2014, she had served as First Deputy Minister of Internal Affairs in Georgia from 2006 to 2012, and as acting minister in 2012.

Zguladze-Glucksmann is married to French journalist and film director Raphaël Glucksmann, who is the son of philosopher and writer André Glucksmann, and a former adviser to the ex-President of Georgia, Mikheil Saakashvili.

She spoke to a group of visiting Western journalists and scholars, invited by the Institute of World Policy, a Ukrainian think tank.

The minister, who took her new job in December 2014, described Ukraine is a country with many security challenges, the victim of hybrid war, and with many internal wars.

“Maidan didn’t go without wounds. Maidan was a culmination of frustration, not only about the lack of EU integration. It was a shout of the public against corruption, against dictatorship,” she said, referring to the dramatic events of 21 November 2013, when popular protests started in response to President Viktor Yanukovich’s refusal to sign an Association Agreement with the EU. In late February 2014, when he left the country.

“When the government came with the plan to invite foreigners to join the technical government, I think it was brave, adventurous, but not something that apriori guarantees any results,” she said. Zguladze-Glucksmann was among several foreign experts to whom the cabinet of Arseniy Yatsnyuk gave key positions.

She said that like other foreigners, she came with prejudices about Ukraine, thinking that the situation was similar to that of her native Georgia. But, the official said, she quickly realized that there was little in common, except the post-Soviet syndrome and the influence of Russia.

“We decided to test the public mood, to make it more explicit about their needs and create an expectation of reform. We needed a wave of optimism that would open the door for opportunities for us,” said Zguladze-Glucksmann, who studied law in the US and is a fluent English speaker.

Working at the Ukrainian interior ministry, she decided to begin with reforming the traffic police. She explained that they are the representative of the state in the streets that every citizen can interact with, and that they are seen more often than any other types of law enforcement. Through their example, citizens judge what kind of state they live in.

“In Ukraine, as in many post-Soviet countries, traffic police are little street robbers, plus very physically unfit,” the offical said, referring to the typical traffic policemen in many countries in Eastern Europe, known for extorting bribes from drivers, and for being typically fat.

“Why (do) I underline this? Don’t dismiss the importance of uniforms and looks. A person who doesn’t take pride in its own uniform, who doesn’t take care of its physical shape, doesn’t bring respect,” she commented.

The official stated that she was invited to take her job in December 2014, and in January she initiated the reform. When she started, there was not yet a budget or partnerships for reforms. So she and her team started by opening nationwide competition for the new policemen, using the campaign as a channel to communicate the principles of the new police.

“We say we want guys and young ladies with clean heads and clean minds, without corruption history,” the minister stated, adding that her office was ready to compromise education over the integrity of the person, and that it would measure skills over education. “Because we said that a smart person can learn. And more important is that the person has principles, because principles cannot be taught,” she said. 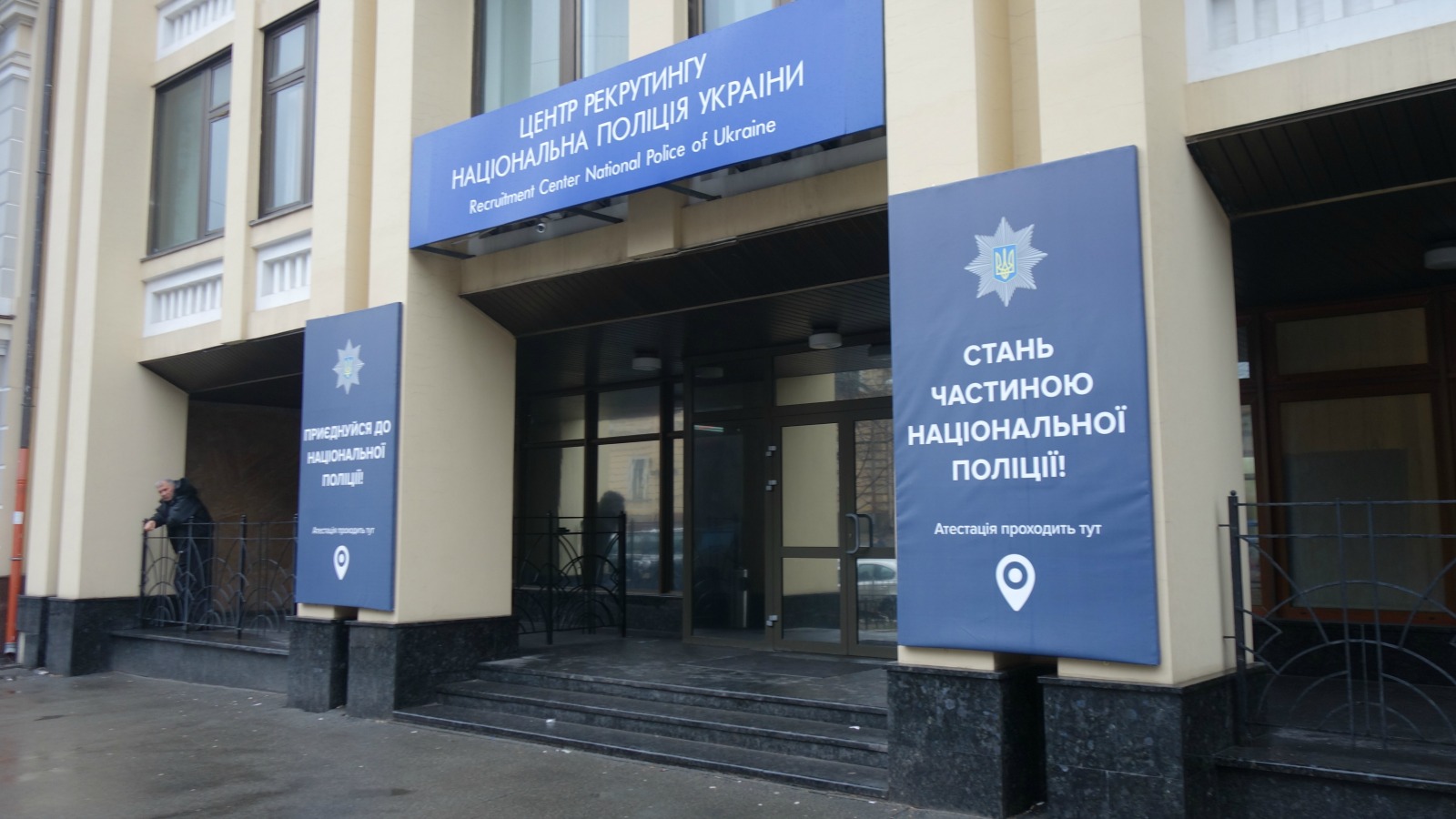 The national police recruits. A police office in the center of Kyiv [Georgi Gotev]

“We had an army, not yet of supporters, but of people interested to be part of the reform,” said Zguladze-Glucksmann, who has also studied journalism and is known to be a very good communicator.

The selected people were sent to a revamped police academy, with a completely new curriculum. There, some of the trainers were lawyers, but activists were also used, including Maidan veterans, to teach about human rights, communication, sensitive crimes like rape, trafficking or child rights.

“It’s not about memorizing articles of the criminal code, it’s about people who believe in human rights,” she said.

Her office asked donors to not split it in small projects. The USA, Canada, Japan, and after that the EU also joined in, and funds were sufficient for the reform to begin.

But it was more difficult to push through the reform through parliament, which basically remained unreformed, although  snap elections were held in October 2014. The legislative reform, which the minister and her team introduced in March, didn’t go easy.

“For me, this was the most difficult experience. I’m not a politician, and I thought part of my contract was not to do politics,” she said.

But her team decided not to give up and if they are not allowed to conduct the reform nation-wide, to launch instead a pilot in Kyiv, for which no legislation is needed. This pilot was launched in July, and was visible by the new uniforms, the new cars, but most importantly, new quality of services given to the citizens to Kyiv.

“This was our branding project, an introduction of a much larger reform we had in mind,” she said.

After a month of suspicion, and another one of resistance, beginnng in September a rise in public trust was registered.

“Right now, at the end of March, we will be in 27 cities, with 16,000 completely new policemen, and our trust rate is between 70 to 82% throughout the country, which is an excellent appraisal,” the minister said.

The new and the old

Zguladze-Glucksmann pointed out that the old policemen were not dismissed. “We said let this be a test for both of us. The reform should not segregate between old and new, between bad and good, but gives changes to everyone,” she said, explaining that her ministry started a very complex vetting process, coupled with a merit-based promotion system.

For the reform, she explained, traditionally hierarchical forms of management were abandoned. “We say let leaders emerge. We can wait,” she said.

A horizontal cooperation and team management approach holds together the 150,000 police in Ukrainein a workable environment, even though half of them are through the vetting process and don’t know if they will stay or not, she explained.

She also noted that the Soviet-type of police investigation, which consists of operatives on the ground and clerks in the office working on the same case, was to be dismantled, as it was inefficient, expensive and breeding corruption. A legal initiative was introduced, based on the Czech experience from 2009, the most advanced in the former Soviet bloc.

A lot of digital instruments was implemented in filing the cases, in an effort to improve control over the process and to avoid arbitrary decisions, and corruption, she said.

Another reform effort concerns the special forces, including Berkut, the security unit that attacked the Maidan protestors. The minister explained that this was psychologically difficult for the public, and extremely sensitive for politicians.

“Even in this large group, there are individual cases. We cannot do selective justice and we cannot do group justice,” she said.

Special forces are needed to fight organized crime, not the people, she said, as Berkut were mainly used to fend off mass protests. “Snipers are not needed in crowd management,” she Zguladze-Glucksmann added.

Asked by EURACTIV how she hoped to work with an unfriendly parliament, she stated:

“My ambition was to prove that law enforcement reform is possible, and that was done. That was the little something we wanted to change, in building a state that serves you,” she said.

The new traffic police may have new uniforms and cars, but traffic in Kyiv remains as hectic as it used to be. Many crossings are badly regulated, and most of the drivers don’t observe traffic lights or signs, creating unnecessary jams.